Announced way back in June 2012, Journey: Collector’s Edition was released in August that same year in the US. And that was it. Citing localisation costs as the main reason, thatgamecompany announced via their Twitter account that same day that Journey: CE would not be seeing an EU release and urged fans to push Sony if they wanted that to change. Well the fans must have pushed pretty damn hard because in April 2013 Journey: Collector’s Edition finally saw an EU release on the Playstation Store, and now just two months later it has finally been given a Blu Ray release, and it was totally worth the wait.

Journey: Collector’s Edition comes complete with flOw, Flower, and Journey, as well as three previously unavailable mini games. Also included on the disc are soundtracks from each game, themes, a 30 minute making of documentary, and commentaries for each game. Unfortunately the commentaries take place over pre-recorded game footage which makes them feel like big budget let’s play videos, which is a real shame as they would have been a welcome addition if the audio tracks were available to listen to while you were actually playing the game.

Originally starting life as flash game in 2006 before being reworked for Playstation 3 in 2007, flOw sees you take control of one of several creatures as you eat smaller (and sometimes bigger) creatures to grow. You can then descend deeper into the oceanic world they inhabit until you reach the darkest depths and unlock a new creature to control during your next ‘campaign’. flOw’s visuals and sound are simplistic yet effective; the creatures micro-organism like design and the ever darkening blue backdrop create the illusion of life through a microscope in an almost alien world. The ambient, sometimes haunting tones of the soundtrack put emphasis on the underwater setting and do a great job of creating scale — reminding you how very small you are.

Unfortunately flOw hails from a time in the consoles life where pretty much everything had to use sixaxis controls in one way or another, and this doesn’t work well as you have to move the controller in exceedingly unnatural ways in order to steer your creature. I honestly feel that had the movements been mapped to the analogue sticks flOw would have been a much more fun, if a somewhat simpler experience. 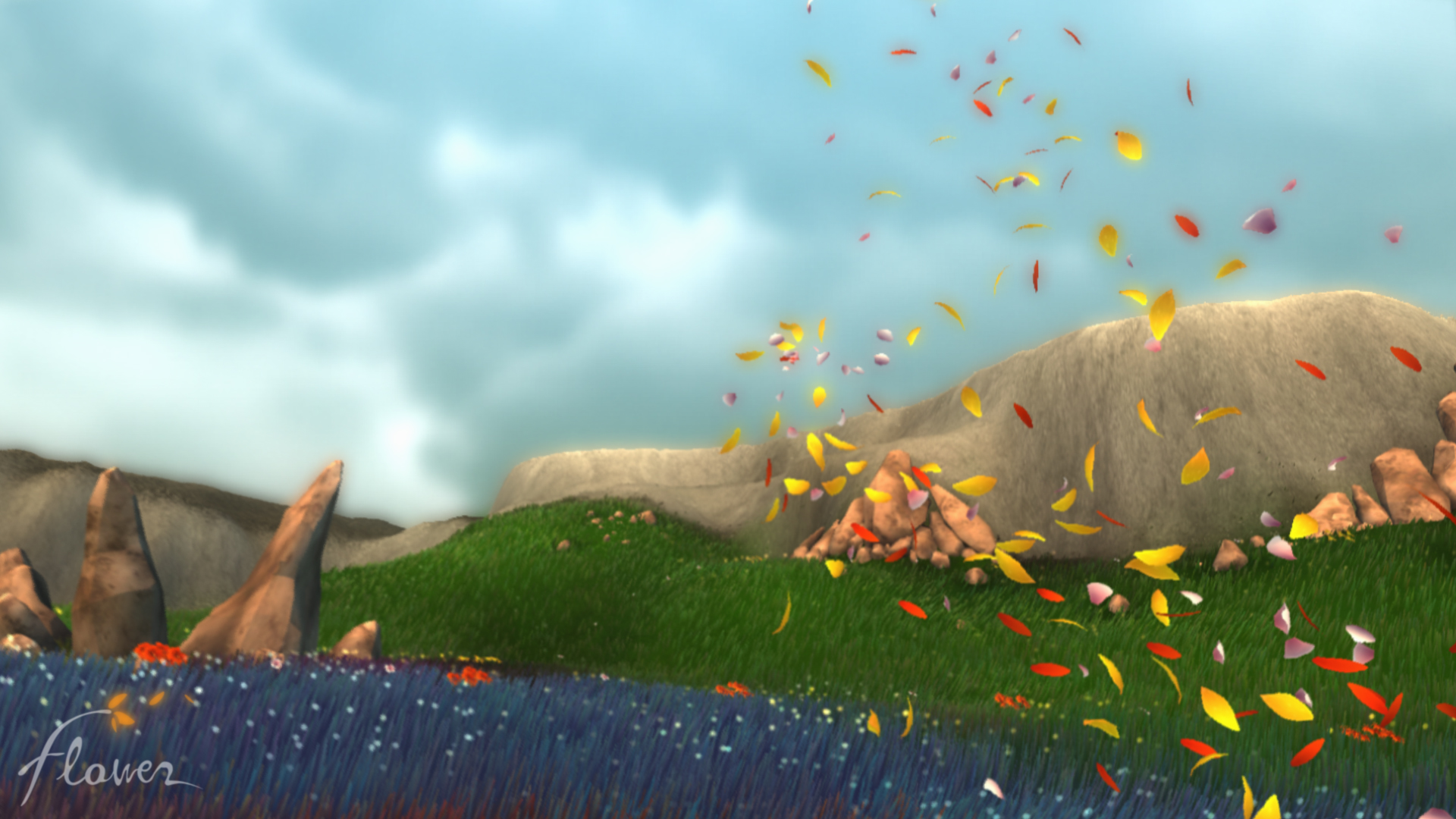 The beauty of Flower has to be seen to be believed

Described as an “interactive poem” by its creators, Flower has the appearance of a painting come to life. The use of colour and environments on display here helping to illustrate the story of a world succumbing to pollution as nature struggles against industrialisation. The concept is simple; using the sixaxis to move and an analogue stick to control your speed you control a flower petal as it rides the wind collecting more petals by blooming strategically placed flowers around the environment until an unannounced objective is completed, bringing back the natural beauty to the landscape à la Okami.

Although an improvement over flOw, the sixaxis control can still be tricky in places, especially when attempting a couple of the trophies on offer. The visuals are also starting to look a little rough around the edges, but that’s not to say that it looks bad. It’s still a stunning game and when compared to the amount of greys and browns out there, it has no problem standing out in a crowd. The use of music and sound in Flower really help to tell the story and make for a much fuller and emotional experience, helping to portray opposite extremes from happiness to horror, it’s an audio experience many other developers could learn from.

Journey is a difficult one to describe, especially without spoiling the experience. From the simplistic colour palette of reds, gold, and blues, the design of the architecture and the amazing sand effects, everything on display here is designed to make the you feel something – Journey is simply beautiful to look at.

When the story begins you are a nameless, ambiguous, robed character drawn to a mountain top for reasons initially unclear, and the story unfolds gradually through pictures shown to you at key moments. There are no spoken words in Journey and the the only written text you will see is the tutorial which leaves everything you see open to interpretation. Additionally, the amazing sound track courtesy of Austin Wintory perfectly encapsulates the heroes journey, from the excitement of beginning your adventure, to the tense feeling of being hunted through the ruins, and the desperation of trying to finish your ascent. The score is absolutely phenomenal. 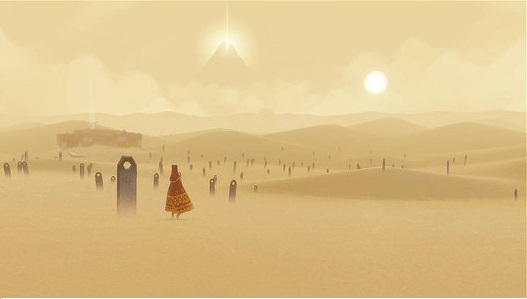 The loneliness in Journey is overwhelming at times

If you are connected to the internet while playing Journey you will come across other players on their own pilgrimage who you can choose to ignore if you wish, or join and adventure together collecting trophies and finding secrets. However, you have no idea who you are playing with, and the only way to communicate is with the O button that gives a generic call. Other than that you have absolutely no way of directing, asking, questioning, anything. You have to trust each other, and hope that the other player interprets your erratic movements and constant ‘peeping’ as ”come over here, I’m looking for a thing!” The amazing thing is most of the time they do, and before long you find yourself helping and being helped without a second thought, it’s absolutely wonderful. I managed to play through Journey three times during this review and had a completely different experience each time. The replayability on offer here is incredible, especially for you trophy hunters.

If you already own the three main titles on offer I’d struggle to recommend picking this up as everything bar the mini games are available elsewhere and aren’t really worth the cost of a disc.That being said, if you are yet to experience these games, and they really are an experience, then I urge you to pick this is up. At half the price of a new AAA title Journey: Collector’s Edition is amazing value for money. flOw, Flower, and Journey are three amazing games you won’t be able to forget for a long time after you play them, and at around two to four hours in length each they are absolutely perfect for these rainy summer afternoons.