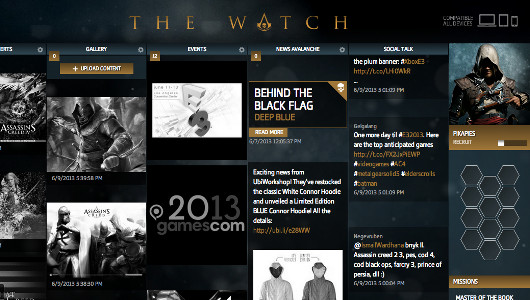 Over the past few years, I’ve become fascinated with the marketing and advertising machine that is the video games industry.

From hiding secret files in the original Portal to announce the second, to a trailer for God Of War: Ascension being shown during the Super Bowl (One of the most prestigious advertising slots in the world), the industry is never afraid to think big, yet also to innovate.

This brings us to The Watch; Ubisoft’s browser-based ‘VIP platform’ for Assassin’s Creed IV: Black Flag. Exclusive for fans who have pre-ordered the game, The Watch serves as a hub for news, trailers and exclusive content which includes interviews with the development team, artwork and events. What’s more, fans are placed into the role of a new recruit and have to take part in missions to rise through the ranks.

When you first log into The Watch, you’re presented with these missions, of which there are five. The first, Master Of The Book, is a multimedia quiz which tests your knowledge of the Assassin’s Creed series. What makes it a bit more interesting is that you’re tested on maps, images, music tracks and videos from the series. Now, I’ve never played more than a couple of hours of AC’s 1 and 2, so I was stumped, but I’m sure that hardcore fans will enjoy the challenge.

The next few missions are where The Watch’s mission as a marketing tool become apparent. Master Of Rumours asks you to share content on social media, while Master Of The Arts and Master Of Disguise ask you to upload pictures of your Assassin’s Creed fanart and cosplay, respectively. Then, other fans who are part of The Watch are able to vote on your pictures, thus pushing your ranking higher. Finally, Master Of The Watch has you watching interactive videos.

Once you’ve picked your first mission, you’re then brought to the main page: a feed of all the content that’s been shared from official sources, other users of The Watch, news from Ubisoft and a Twitter feed which pulls up any mention of Assassin’s Creed. You can also check your own profile, see how your ranking is doing, view the content that you’ve liked, and check out the leaderboards. 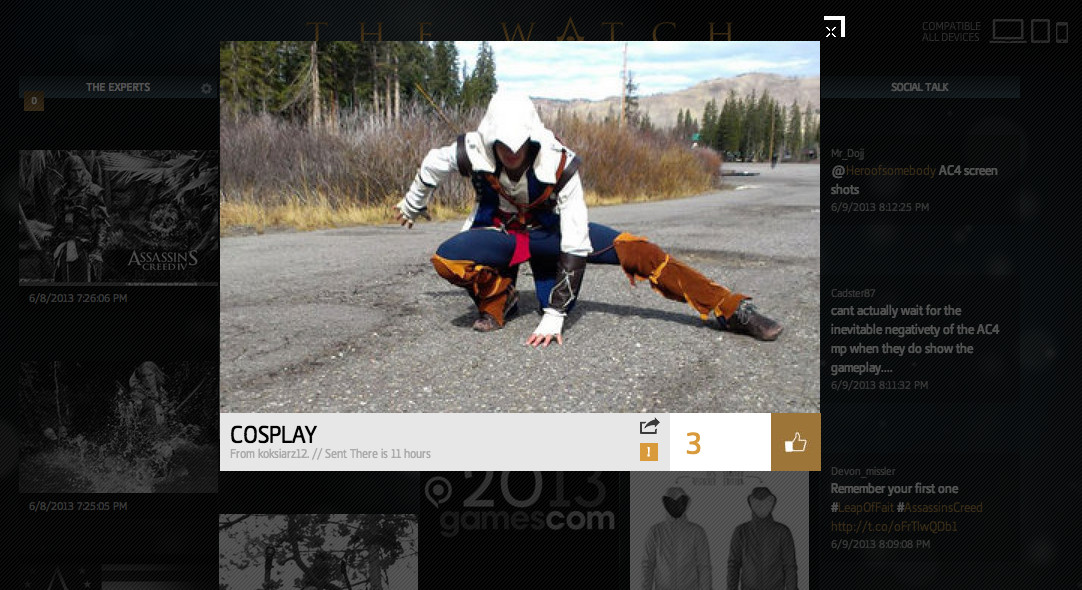 It is worth mentioning that I was using Google Chrome to log in to The Watch, and it really didn’t run very well at all. The menus were jerky and would sometimes be completely unresponsive. However, it did run much, much better when viewing it on my iPad and the site has been fantastically optimised for mobile browsers. If you’re having problems with the site on a laptop or PC, it’s definitely worth trying it out on your phone or tablet instead.

So, is The Watch worth checking out? Ubisoft have clearly put a lot of time and effort into it, with a slick and stylish UI and a wealth of genuinely interesting exclusive content, and some of the fan-generated artwork and costumes that are available are superb. I’m not much of a fan of the AC series and I still found plenty there to keep me interested for a few hours and coming back for repeated visits over a couple of days. On the other hand, if you’re someone who’s collected every feather and knows the lore of the Templars inside out, The Watch is definitely worth playing with. 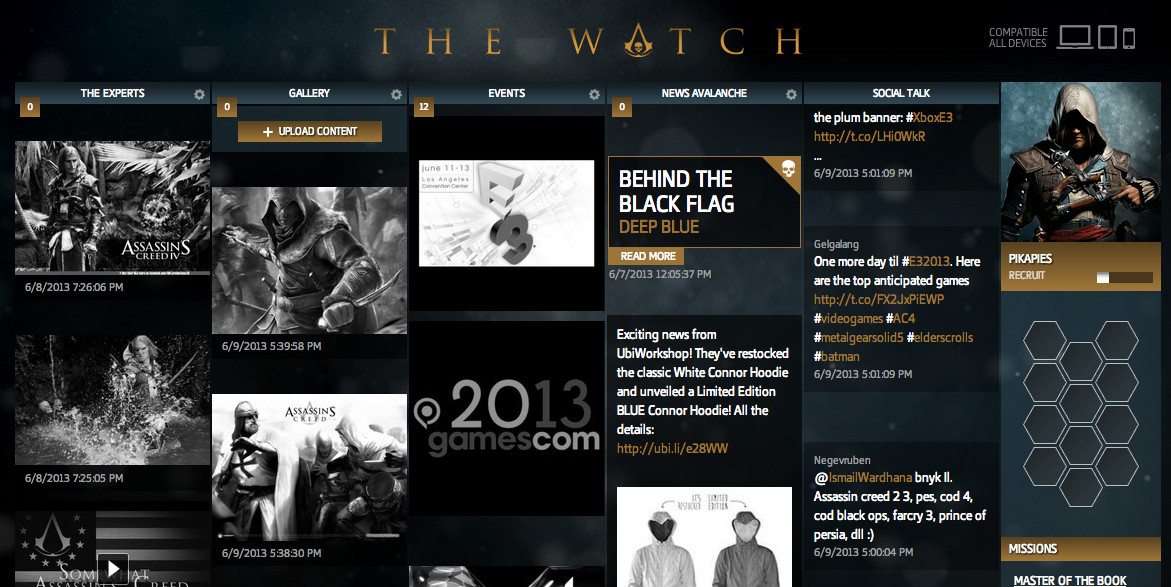 By making The Watch available only to those who have pre-ordered ACIV, it’s clear that this is aimed squarely at the hardcore Assassin’s Creed fans, turning them into ambassadors for the brand and using them to help promote the game. It’s a fairly common marketing technique, but I think that the cynics among you may be put off by this.

Personally, I really don’t see this as a bad thing. The social media sharing is entirely optional, as is taking part in any of the missions, and none of the content that’s unlocked has any bearing on the game. This style of brand ambassador marketing is only going to become more and more prevalent as time goes on, and it’s not just exclusive to the games industry. Pizza Express asked customers to Instagram pictures of their latest salads to be entered into a prize draw, for example. I think that if the rewards are worth the effort then there’s really no problem and, in the case of The Watch, Assassin’s Creed fans are going to love what’s in store for them.

As a final point, I would love to know your thoughts on companies using fans to spread the message. Do you take part in it? Are you happy to share your favourite games with your friends? Or, do you think that it’s a cynical ploy to exploit consumers?