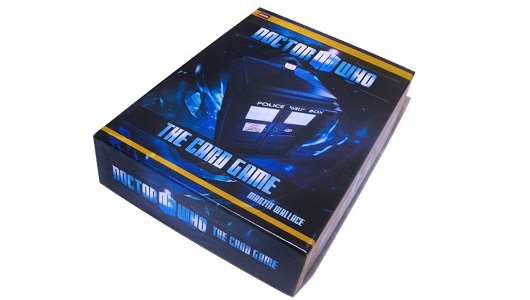 Review: Doctor Who: The Card Game

Far more than a simple cash-in, Doctor Who: The Card Game is a thematically solid, surprisingly meaty and well-thought out game. The only thing missing is the fun.

I was interested in this game not just because of its links to one of my favourite shows, but also because the designer is responsible for the rather lovely A Few Acres of Snow– a two-player card-game-slash-strategy-board-game about the war over North America between England and France. A Few Acres of Snow is a game more about strategic planning than the sudden bursts of conflict that punctuate it and this feeling carries through into Doctor Who: The Card Game. Which is surprising considering the source material. 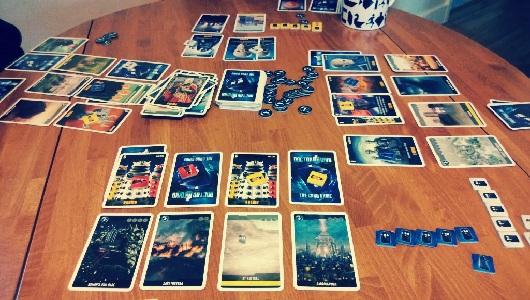 Players work with a hand of cards from which they may play as many locations (worth victory points), defenders (in the form of the then-current TARDIS team) and enemies (a fairly comprehensive menagerie of villains from the show’s last seven years) as they wish each turn. Defenders protect a player’s locations from invasion whilst enemies are played against opponents’ locations in order to steal their victory points at the end of the game. In an interesting twist players must also pass the remaining cards in their hand to their neighbour at the end of each turn, forcing them to balance what cards they need with what cards they need to prevent their opponent from getting.

These mechanics actually work very nicely with the theme. Locations are under attack from hordes of monsters pretty much the instant they are placed- many of which will need at least two of the TARDIS crew to be defeated. Defeating an enemy will earn a moment’s respite from attack in the form of a TARDIS counter that auto-defeats the next enemy to arrive at that location and this system really makes it actually feel like the TARDIS crew are zipping around the universe pushing back waves of enemies that just. keep. coming.

The issue is that it’s not actually that tactical, when a location is up for grabs the next player usually steals it in their turn and there are always one or two high-value location cards in play that the owner will sink all their defenders into making the breadth of play the rules allow for, more of a nice idea than a reality.

It’s also not really that exciting. The battles are too abstract to really get invested in and it doesn’t feel that personal when someone sends an army your way simply because… well, there’s not much else for them to do. There doesn’t seem to be a way to bring any kind of personal style to the game with players quickly employing one universally ‘good’ strategy that leaves little room for experimentation.

The saving grace is the end-game. Once the draw pile is down to the final twenty cards, players are only able to perform one action per turn where before they could perform as many as they had cards. This alters the dynamic considerably since you can no longer follow up exploratory raids with an appropriately sized army (leaving it open for the next player to jump in ahead of you), nor can you immediately defend any new locations you might put down. This escalates the pace and drama of the game and makes the final few moves incredibly tactical with plenty of bluffing and second-guessing. The layout of the battlefield can be altered dramatically in a way that simply wasn’t possible in previous turns- in fact the effect is often so pronounced that the majority of the game leading up to this moment can seem ultimately superfluous.

I would have enjoyed this game significantly more if this change of pace had been implemented more gradually, as it is Doctor Who: The Card Game is something I do enjoy eventually, but only after the first fifteen minutes.

Production-wise the game is very nice with chunky counters and tough cards, the use of artwork rather than photos is a nice touch however the artists were clearly hampered by the need to stick to the standard publicity shots rather than bringing their own impressions of the characters to the fore. For the price it’s actually a bit of a steal, and if you know anyone who enjoys Doctor Who and/or Card Games you could do a lot worse than picking this up.

Martin Wallace certainly didn’t phone this in and Doctor Who: The Card Game is everything you could ask for within the limitations of the brand and the broad range of ages it needs to cater for. You’ll have fun, but it’s not going to stick long in the memory.