It cannot be denied that Tate Interactive’s Urban Trial Freestyle owes a debt to RedLynx’s Trials series. However, as the latter is a Microsoft exclusive, many PlayStation and Nintendo fans will lap this up. Can Urban Trial Freestyle break the shackles of its obvious inspiration to offer non-Microsoft gamers something fresh and new?

I do not mean to sound harsh, but when I play Urban Trial Freestyle, I am reminded of a class-mate I used to have who kept trying to copy my work at school. However, through spelling mistakes, grammatical errors and inserting his own sheer nonsense, he never achieved what he set out to. This game simply does not copy Trials well enough to be considered a success.

To begin with, it is quite short. The main campaign is set across five areas with about four tracks in each area. Each level takes one or two minutes to complete. For each track, there are two trials associated with it – a basic time-trial and a stunt exhibition. The time-trial is self-explanatory but the stunt exhibition mode isn’t – mainly due to the fact that there is no stunt button in the game. Instead, stunts are split into long jumps, high jumps and precision jumps. The only real stunt I found was a flip jump where you earn more points for each degree of a flip you perform. 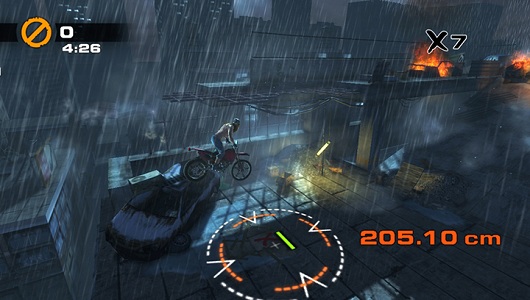 Landing exactly in the right area scores you ‘stunt’ points?

Completing each track earns you up to five stars, with later levels requiring a certain number to progress. Achieving a quick time or scoring more points through ‘stunts’ increases your haul of stars. Often, you will find yourself unable to progress as you simply did not have a good enough bike to achieve the best star rating; this is where the upgrade system comes into place. Cash is distributed throughout each level, often hidden in hard-to-reach areas. This can be used to purchase items to customise your character and upgrades for your bike. Outfitting your bike with the right upgrades before each event is vital later in the game, where in some cases you will need more horse-power than handling. 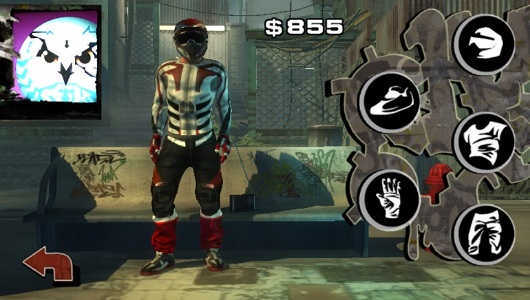 Buying upgrades to your bike helps you in-game, buying clothes does not.

The final portion of the game is the Challenges section. From blowing yourself up using gas tanks and trying to get your corpse flung as far as possible to collecting as many icons in a level as possible, these mini-games are diverse and fun. Once you complete these though, you quickly realise that there is little else on offer. This is a game screaming out for a multiplayer mode or some level-editing tools.

Score-chasing is addictive.
The challenges add much needed fun to the experience.
Comparisons are only good if you come out on top. This game doesn’t.
The lack of multiplayer or a level-editor/creator makes this short experience shorter

Urban Trial Freestyle has its shortcomings but Tate have made a competent game with fun moments. However, if you are looking for a Trials alternative, I don’t think this will be enough to satisfy you.