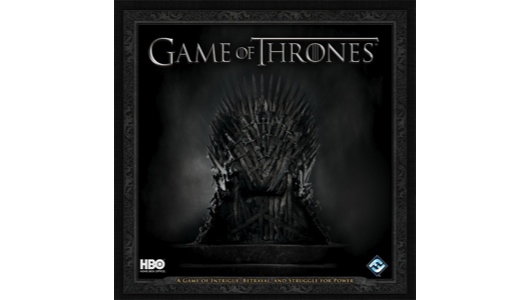 Preface: This is the first of our Board Game reviews, by our new resident expert, Oli. It is something that a number of existing staff members have a passion for, but also part of the reason we just added new members to our writing staff. As it is of interest to us, we figure that you (our readers) will be interested too, but we will be focusing on Board Games based on videogames and items of special interest, like GoT today. It is a option that we were considering, but have moved into since been offered the opportunity of review copies, which makes it a lot easier for us to do and to do in a timely fashion. It will be adding to our coverage rather than taking away from it, but we would appreciate your feedback. – Tim (On behalf of BRB)

Based on the HBO series, Fantasy Flight’s adaptation of its own living card game feels well themed, but rough around the edges.

Let’s get the good stuff out of the way first before diving into the core mechanics of this game because there are a number of positives that should be recognised.

The first is Fantasy Flight’s trademark production quality, something that cannot be underestimated in the world of board games, where the physical handling of ‘stuff’ can really enhance a playing experience. From the matt cardboard box and chunky coin and power tokens, to the sturdy gloss playing cards, Game of Thrones sure looks the part. The rules are presented well (aside from a few typos), although they are not as friendly to those that like to read as they play with some of the more complex rules relegated to the back of the book, rather than the phases in which they’re applied. These are small niggles though, since the game is relatively straightforward to understand.

The other big plus is the theming of the cards. Since this game is based around a simplified version of Fantasy Flight’s own Living Card Game (an LCG, for those that don’t know, being a game that has additional sets of cards released later individually that build on the core gameplay) the designers have had plenty of time to ensure that the behaviour of each character within the game rules is very in-keeping with their actions in the series.

The issue, then, is the gameplay. 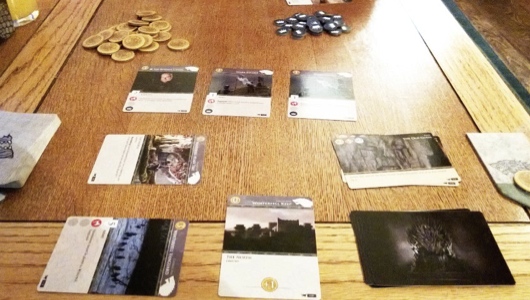 The aim of Game of Thrones is for one player to accumulate 15 power tokens. To do this they will take on the role of one of the great houses; House Stark and House Lannister. Each house features their own specific decks of cards and players will draw new cards at the beginning of each turn, playing Location cards onto the table in front of them (that provide bonuses to cash or characters’ strength) as well as Characters from the show that initiate or defend against three different types of attack: Military (which kills another player’s characters), Intrigue (which forces them to discard cards from their hand) or Power (which steals power tokens). Event cards and plot cards provide additional variation, giving one time buffs or turn-based abilities respectively.

The game plays very similar to Magic: The Gathering. Once cards are on the table they are turned on their side (knelt) to activate their powers, with only those that remain unused counting towards a house’s power total at the end of each turn. This is a very standard set of rules and done well can result in an entertaining, if not exactly inventive hour or so. Unfortunately in this case the game is entirely let down by its balancing.

The game is hugely reliant on chance, with very little in the way of player tactics. Whilst the houses play differently, they have no subtlety to their decks and each plays very aggressively. Most powers are designed to screw the other player over and often cannot be countered unless the opponent happens to have a specific card of their own at that exact moment. The titular Iron Throne for example makes its owner auto-win every turn unless their opponent plays a throne card of their own, and if that card is at the bottom of their draw deck then the game becomes very tedious indeed.

There is no finesse to the gameplay, no systems to be mastered or tactics to be deployed, just a relentless back and forth of kicks to the crotch that can drag on for almost two hours (double the play-time listed on the box), after which point you will have a hand full of cards you can’t use because the characters they represent are already dead, a tonne of useless gold you can’t spend and an empty hatred of both your opponent and yourself. This game displays all the signs of not having been play-tested thoroughly and instead appears to have been hewn from the Living Card Game with no effort made to patch up the holes that this has left in the balancing.

For Game of Thrones fans this game will look very nice sitting on a shelf next to the series box sets, but I would recommend trying out any of the many other Game of Thrones games available- including the original Living Card Game. If it’s a two-player duelling game that you’re really looking for then there are a number of other, much better titles out there- including the endlessly inventive and incredibly evocative Android: Netrunner (also from Fantasy Flight) or the more sedate The Princes of Catan by Mayfair Games.

If as much care had been taken with the balancing of Game of Thrones as has been lavished on the production, then this would have been an enjoyable package. As it is the game is too rough to recommend, especially when Fantasy Flight already provide so many enjoyable alternatives.