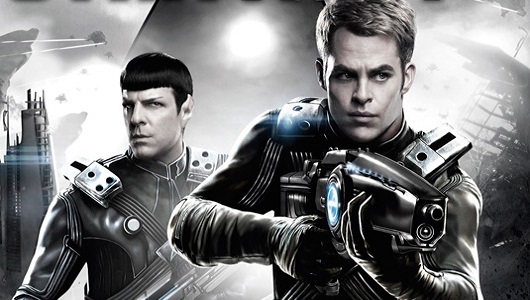 I recently got to attend a preview event hosted by Namco Bandai, where they were showing off their latest title, Star Trek The Video Game. Having never attended anything like this before, I tried to turn my head into a figurative sponge, soaking up any and all of the information I could. I will now proceed to squeeze myself out onto this webpage, for your pleasure. I assume that mental image has now been forcibly burned into the back of your mind, so onto the game.

After a run through of one of the levels we would get to play, Brian Miller, a senior vice president at Paramount took some questions from the crowd – one of the first being what games acted as inspiration for the team at Digital Extremes. The one game from the subsequent list he produced that caught me was Mass Effect, as it was the game I kept thinking of during the playthrough. This, in itself, is no bad thing, however when you invite these comparisons, you need to at least meet them.

The good news for Trekkers (not Trekkies, another thing I learned) is the signs so far point to a carefully crafted game hoping to entice you into the world through its licence, while keeping you entertained with its familiar gameplay, but original story. Marianne Krawczyk, the BAFTA-winning writer behind the God of War and Shank series, has been drafted in to construct a story that fits between the 2009 Star Trek reboot and its forthcoming sequel, Star Trek Into Darkness. The film’s writers, Alex Kurtzman and Roberto Orci, have also consulted on it, adding a level of credibility to proceedings.

Other facets of the game also benefit from the movie tie-ins. Firstly, the majority of the film’s cast lend their voices and likenesses, though the uncanny valley is not so much leapt over as stumbled into here. Also, Michael Giacchino’s music studio has provided the score for the game, which genuinely works in bringing you into the world (or should I say worlds).

When I finally got my hands on a controller, the first level I played was taken from an early section of the game. After receiving a distress signal from a space station located far too close to two neighbouring stars, Kirk and Spock travel via shuttle to it to rendezvous with the station’s crew. The third-person, over-the-shoulder gameplay felt familiar and ‘lightweight’, more akin to Mass Effect than Gears of War. Surprisingly, combat was non-existent throughout the entire level. In fact, the only use my weapons got was either blowing up a locking mechanism or shooting open vents to act a cover from the often hazardous environment. Instead the gameplay took on a more exploratory nature, exactly what you would expect from a Star Trek game. The most useful tool in this section was the tricorder, which when in use, causes an overlay to appear that points out items of interest, hints to objectives and sometimes, secret pathways. One of the first uses for it was to hack a door, which like most games nowadays, involves a mini-game. This one required the user to match signals, not too dissimilar from a game I have already mentioned a few times, so I will stop now!

The game is also designed from the ground up for co-operative play. Controlling either Kirk or Spock impacts on your play style – while Kirk is best at open combat, Spock uses stealth more effectively. Skills like mind melds can also be used to uncover further plot-points or even item locations. The usual co-op tropes exist here too – opening doors, riding elevators and so on all require both players’ actions. There were also examples of the ‘split up’ mechanic, like shutting down a laser to allow your partner to move past an area opposite you. Unfortunately, I didn’t see anything new here, but it was fun and avoided becoming tedious. 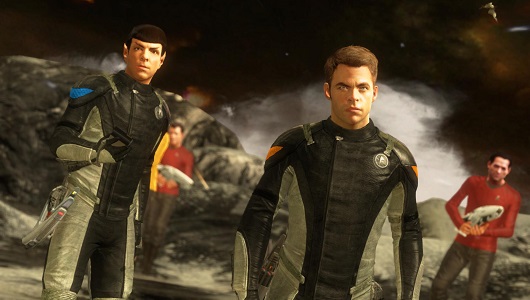 I guess there are two unfortunate deaths ahead…

The second level we played introduced the Gorn, the game’s primary antagonists. Taken from the original T.V. show, they are recreated here in many shapes and sizes. Runners, the weakest of the bunch, are also devilishly fast, either running at or around you, demanding your attention. Commanders are similar to Elites from the Halo universe and no less easy to kill. In order to help you kill them, the developers have kindly supplied you with guns, and not just Phasers either. Though the number was limited in this level, we were assured that there were up to 25 different weapons, each with their own alt-fire modes. The Ravager for example, a Gorn weapon, acted as a shotgun normally and a grenade launcher when times were tough.

Also introduced in this level was the Space Jump. Disappointingly, the jump itself was basically on rails, with you using a small propulsion device to maneuver around debris in space. This was the most frustrating area of our demo by far. The path you took was preordained for the most part with you simply moving away from obstacles, however just when you thought you were far enough away from an object, your path would shift so you crashed head first into it. Trial-and-error had to be used until you learned the pattern.

Finally, I haven’t mentioned some of the glitches I experienced as this was not release code and should be fixed prior to release. However, watching your partner running in circles and slowly float away was disconcerting. Once or twice, they also seemed to appear in front of me even though they had been a few yards behind me seconds before.

Despite this, my playthrough has actually increased my interest. Good video games based on movies are the exception, not the rule, but Digital Extremes appear to have taken a leaf out of Rocksteady’s book and crafted their own title. The visuals, music and voice-acting all help to immerse you in the Star Trek universe but the story and gameplay seem to be solid, similar to the Arkham series. Roll on April…