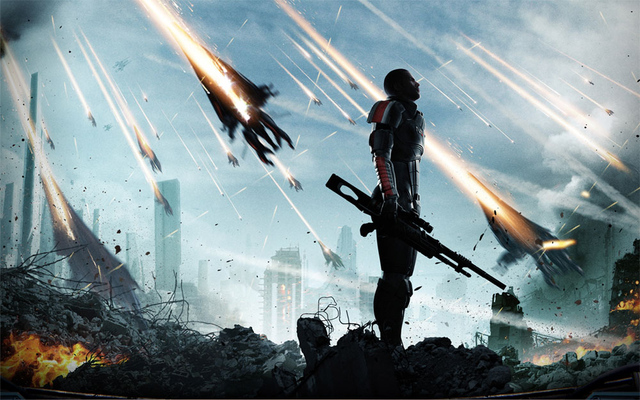 [WARNING – Massive spoilers ahead for the Mass Effect Trilogy]

From day one Shepard’s fate was sealed, having to sacrifice themselves for the galaxy; a true hero. But once you become so attached to a character, you only want the best for them. Is that so wrong? When Thane died, I had to pause and take a breather. We all knew Thane was going to pass away due to his illness, but still it tugs at your heart strings. This character whom you had come to like in the previous game was going to die in front of you. It’s only a video game yes, but BioWare manages to make you care and feel emotion for these souls they have created. The characters charm us, flirt with us, love us and even hate us. And we do the same in return.

I completed Mass Effect 3 last year, just after the extended cut was released. As a fan of the series, I was disappointed. Deep down I had a feeling Shepard was going to leave the Normandy for good. But at the same time I wanted my Fem Shep to settle down with Garrus and have cute little space alien babies. Depending on the ending you got, there is still some hope there that Shepard may return again one day …

It seems BioWare felt guilty about the ending because we are now getting more DLC content rather quickly. The company didn’t have to listen to the uproar of their fans and could have let Shepard rot, but they chose to listen. Still we acted like spoilt children because we didn’t like what we were given. BioWare can’t do right by us with Mass Effect 3, Shepard deserved a happy ending after everything the character had gone though, so why couldn’t BioWare give us that?

However, a new portion of DLC has appeared on the horizon. Yes, this is the final piece of Mass Effect 3 DLC. Citadel has been described as “an emotional ride” featuring fan-favourite characters from the series. It will be “one final, sentimental journey with Commander Shepard and their squad.” The description goes on to add; “When the adventure is over, reconnect with your favourite characters from the Mass Effect Trilogy, try your luck at the Citadel’s Silver Coast Casino, blow off steam in the Armax Combat Arena, or explore and furnish Shepard’s own living quarters on the Citadel. With unique content and cinematics featuring your friends and romance interests in the Mass Effect trilogy, Mass Effect 3: Citadel offers one final chance to see the characters you have known for years and rekindle romances.” 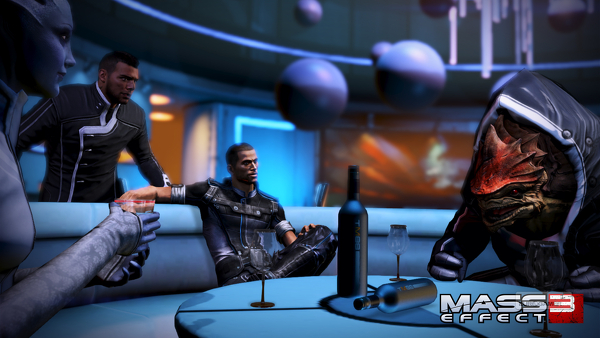 Wrex was not impressed that he had to buy the next round.

Citadel is that big, the DLC has to be broken down into 2 parts! For 12oo Mircosoft Points, the player is getting almost 4GB of gameplay. However, dont worry about paying two amounts, Part 1 is the only piece you are paying for. Part 2 can be downloaded later for free. It appears Bioware have gone all out for the final piece of this epic game. The old cast of Mass Effect 1 and 2 put in an appearance, as does Zaeed, voiced by the late Robin Sachs.

Mass Effect executive producer Casey Hudson said “We have always been humbled and driven by the passion of our fans for the Mass Effect trilogy. We hope fans will enjoy spending more time with some of their favourite characters — we have certainly enjoyed spending time creating them. We’re excited to release this final send-off for the trilogy and move forward into the future of the Mass Effect universe.”

So, will the fans be finally satisfied with this last meal? Being able to play as Shephard again is something I am looking forward to. I have decided to restart my adventures all over again once Citadel has been released so I can relive the whole trilogy in full. Who knows who will appear in Mass Effect 4, but I would possibly like to see a nod to one of the bravest hero/heroines in the whole damn galaxy.