***Please join me in welcoming new writer, Sarah, to the front page of BRB – Tim***

From Skyrim to Minecraft, it seems that we spend most of our video game time in and out of various caves, but never so obviously as this. Created by Ron Gilbert, The Cave is the newest offering from Double Fine and is a combination of a puzzler and a 2D platformer set, obviously, in a cave.

The story of The Cave is a simple one; seven characters have gathered around a campfire at the entrance to the cave, and each one is looking for a special something which will only be found within its depths. The characters are wildly varied, ranging from a knight in shining armour to a pair of creepy, Omen-esque twins, and each has a particular special ability. For example, the Scientist can hack door terminals while the Adventurer can grapple from hooks and these ability will give you alternative ways to solve the cave’s puzzles. You pick three of these characters, and your party heads into the cave.

We can’t talk about characters without also talking about the cave itself, however. That’s right, the titular cave is your narrator through the game and provides most of the game’s humour. His deep, sultry voice is a perfect match for Ron Gilbert’s trademark dry wit and surreal statements. However, he has a touch of unsettling menace which manifests itself quickly, showing that there is a lot more to the story then might be first thought.

As you would expect from a game with such a unique cast of characters, the art direction of The Cave is truly stunning. The whole game bursts with colour and, in later levels, I found myself having to be reminded that I was still deep underground. Relics fused into the rock, such as red British phone boxes, fossils and even a UFO, are delightful touches while the cartoon help menus and Cave Paintings (Found in each level, they tell you each character’s backstory) would look at home in any Pixar film’s closing credits. 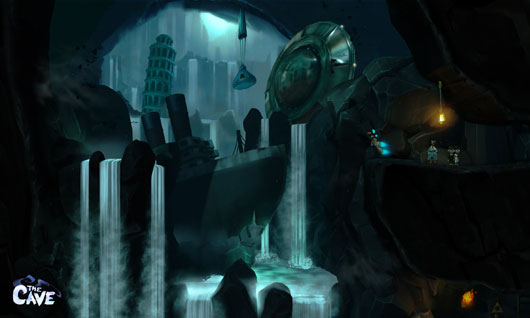 Once you’re inside the cave, you switch back and forth between your three characters at will, to solve the puzzles which are thrown your way. For example, two characters have to hold levers so that a third can pass through a door. While it may look like a platform game, The Cave is an old-school puzzler through and through. Platforming is incredibly easy and there is no real way to die. If you fall into a hazard, you’re just placed back at a reasonably close safe area, much like the 2008 version of Prince of Persia.

The Cave’s puzzles are wholly reminiscent of the golden age of point-and-click adventure games like Monkey Island, where it’s up to you to figure how to solve it. Without giving too much away, the introduction of the game sees you finding a fuse to power a vending machine to get a sausage to trap a monster to clear your path, with no clues from the game — giving you a fantastic sense of satisfaction as you complete each level. However, the difficulty curve can be a little frustrating at times. Well, I say curve, I mean wall. For example, in several places, I found that I would work my way through a level until BAM, I would not have a clue how to progress. I would then have to search high and low for things to interact with, and then try every item with everything else until I found the solution. While this is often considered a hallmark of the genre (Or perhaps testament to my terrible puzzle-solving skills), and fans may relish the challenge, it is frustrating to come across. This is made even worse by the fact that each level is fairly large, and requires a hefty amount of backtracking to find the solution.

It’s worth noting that The Cave has a quite unique level structure. Once you’ve completed the introduction in the Gift Shop, the game then alternates between a choice of level depending on your characters, and a set level which stays the same no matter who your party consists of. This results in seven full levels, which will take you around 4 or 5 hours to complete. What I really liked was how, in one part, I still visited a level for a character not in your party. I just passed through the edge of the level; not exploring it fully but seeing enough to intrigue me.

You see, you can’t just play through The Cave once. Each of the characters’ levels centres around helping them to find what they’ve come to the cave in search of, with the aforementioned Cave Paintings telling you their backstory. Complete the game once, and I guarantee you’ll want to play it again and again to find out why each character is visiting the cave.

However, this will only take you three attempts, and after that there isn’t really much of a reason to revisit The Cave. Cave Paintings are exceptionally easy to come across (I was only missing 2 out of 27 paintings in one playthrough and that was without really hunting for them), and once you know how to solve a level, that’s it. You can experiment with using different characters’ special abilities, but this won’t affect things too much, and going back through the static levels again becomes a bit of a chore. 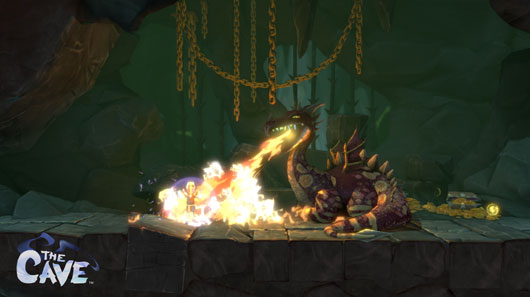 It was with this in mind that I decided to give the co-op a go. I’d already completed the game once at this point and decided to play again co-operatively, but this time with three different characters so I had a chance to play a level I’d done before and a new one. I only had a chance to play local co-op, but trying to figure out the puzzles and laughing at the jokes along with someone in the same room as you is some of the best fun you’ll have on a console… That is, if both of you are new to it. Just like the Portal 2 multiplayer, if one of has played before and thus knows how to solve the puzzles, it takes a lot of the enjoyment out if it.

Incredibly well-written humour & story
Hooks you in and makes you want to play all the stories
Beautiful art style
Lots of backtracking through levels
Frustrating difficulty spikes
Co-op’s not as fun if one of you has played it before.

Despite my criticisms, I loved The Cave. Packed to the brim with charm, artistry and wit, it’s a beautiful game which is an awful lot of fun to play and will challenge even some of the most avid puzzle game fans. However, what really struck me is that while The Cave may look like a fairly light-hearted and humourous game, it has a surprising dark side. I don’t want to spoil any of it for you, but the ending will definitely surprise you and stay with you for a long time after you finish playing.