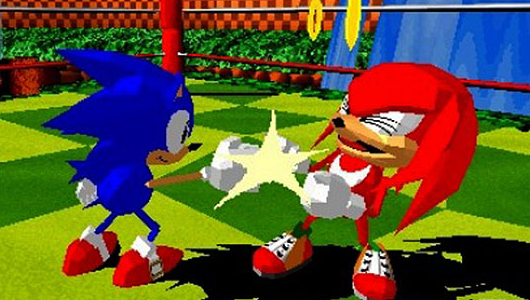 I’m not a big fan of fighting games, but I do enjoy a good Sonic game. Unfortunately Sonic the Fighters is definitely not the latter, and barely contends as the former.

Sega have had some great success in porting their classic titles to the current downloadable market, even to the extent of being able to publish them in bundled retail releases. However, for a video game company that has been around as long as Sega, it’s highly likely that some of their older games won’t have stood up well to the ravages of time – or even have been that good to begin with. So I find it hard to fathom why they would choose to port such an awful game.

Sonic The Fighters, as the name would suggest, is a fighting game starring everybody’s favourite blue-haired hedgehog and his oddly shaped chums. Jump into arcade mode, choose your fighter, and you’ll then have nine fights ahead of you; the seven characters you didn’t pick, a “dark” version of your character and finally Metal Sonic as the boss. After that, there’s a 15 second bonus round, in which you need to defeat Dr. Robotnik to achieve a ‘good’ ending. Each fight takes place in a small, walled off arena, inspired by levels from throughout the Sonic franchise, but since the camera is usually tightly zoomed in on the fighting, there’s very little chance to actually appreciate the different arenas, meaning that you’re pretty unlikely to see anything that will set off a bout of nostalgia.

The fighting itself is similar to Virtua Fighter’s mechanics, using a three button combo to kick, punch and block; the analog stick or d-pad controls movement and jumping. Some of the shoulder buttons offer quick button combos as well, such as dodging and turning around. Blocking is determined by your barriers which, if used too much, will take enough damage to break completely, and if you run out of barriers you can no longer block. You can also sacrifice a barrier in exchange for a hyper attack, which allows you to build up larger combos – these are character specific so, in Sonic’s case, you get turned into Super Sonic for a short duration. But there’s one aspect of this game that’s particularly and severely lacking – especially for a  fighting game – even with two buttons to attack, there simply isn’t a decently-sized pool of moves on offer from any of the characters, meaning that you’ll just end up mashing one button until you win.

As for a difficulty curve, it’s not until the 7th fight that you might lose a round, even on the harder difficulties, so finishing the single-player arcade mode won’t take you long at all. After that, all you’re left with is offline or online versus matches. But it’s not all bad (I suppose) – at least you get some extra characters in this particular port of the title; Metal Sonic, Dr. Robotnik and Honey the Cat are all playable but, thanks to the particularly shallow pool of moves, they don’t really bring anything to the game.

In short, 1/5 Barrels may be me being too generous to Sonic The Fighters, but it deserves the score for two reasons. Firstly, we don’t actually have a 0/5 Barrels graphic available and, secondly, I’m now 400 Gamerscore better off thanks to this game – and maxing out the achievements for Sonic The Fighters only took me about 20 minutes. If you’ve already played Sonic The Fighters in the days of the Gamecube, PlayStation 2 or even in the arcades, there’s very little reason for picking it up now. And if you haven’t played the game, my opinion would be that you keep it that way.