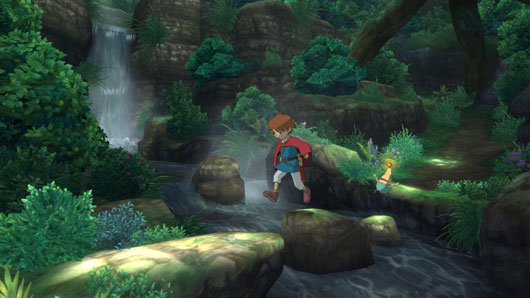 Preview: Ni No Kuni: Wrath of the White Witch (UPDATED)

[ADDITION: I played the opening section of Ni No Kuni earlier this year and you may have had an opportunity to do so yourself if you downloaded the recent demo available on PSN. With the launch rapidly approaching I got the chance to revisit the magical land of Ni No Kuni to play the opening three hours of the game. I may have still only scratched the surface, but have added new information to this article for any new details I uncovered.] [N.B: Portions of this article originally published June 9th, 2012]

Just a short time with Ni No Kuni is enough to capture my imagination. The game’s whimsical sense of wonderment has managed to remind me what it was like to be a child again. That is not to say it does not have a serious side – quite the opposite – as the story itself starts with the mother of a child named Oliver sacrificing herself to save her son, after he plunges into a river when messing around with a homemade car built by himself and his best friend. Seeing Oliver weeping by his mother’s bedside is likely to be a powerfully emotional scene for many; but given that I lost my own mother last year, this was particularly poignant for me and may have cut a little close to the bone. The fact that I walked away from the game just over thirty minutes later having been positively uplifted by my time with the game is testament to just how much of a joyful experience it is and clearly a story made by a master craftsman. 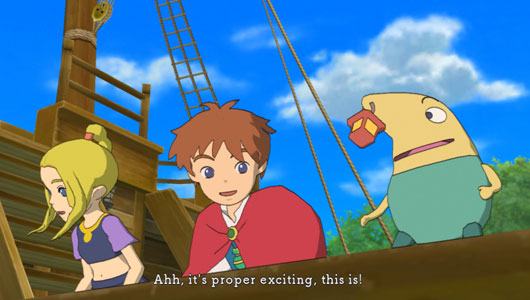 Lots has been written regarding the visual style of Ni No Kuni, particularly about the cut scenes that have been produced by Studio Ghibli and how well the graphics of the game merges from playable to viewable sections. The cut scenes do look fantastic and although there is a noticeable transition from one to the other, the playable sections and in-game engine cutscenes both look great as well – and is perhaps the closest anyone has come to matching the animation style of a Studio Ghibli cartoon. It is a bit of a cliché, but it’s fair to say that pictures alone fail to do this game justice and seeing it in motion is an absolute delight. Seeing how well the visuals of this game turned out makes it an even greater shame that Studio Ghibli have publicly stated their distain for video games. I’m not sure how Level-5 Studios tricked Studio Ghibli into making the Ni No Kuni cutscenes, but it’s really unfortunate that we’re unlikely to see more of them in the future.

I was unaware before playing, that the story of Ni No Kuni starts in America, albeit in a fictional town named Motorville that seems to be in a 1930’s-esque setting. “Ni No Kuni” roughly translates to “Another World”, and it is this other world that the majority of the game takes part. [ADDITION: Although later quests see you having to revisit Motorville.]

Oliver shopping in Motorville before his adventure begins

You are guided there by a male fairy named Drippy – who was trapped as a stuffed toy given to Oliver by his mother and then bought to life by Oliver’s tears. Drippy helps Oliver find a magic book and then shows him where to find a makeshift wand. Oliver then uses this wand to open a gateway to Ni No Kuni – and it is here that the game first shows it’s Nintendo DS heritage, as the symbols for every spell are clearly intended to have been drawn by the player. There was no sign of this being mimicked in the PS3 version, but I imagine that the optional use of a Move controller could be included if desired. [ADDITION: It will come as a relief to most gamers that no Move functionality has been included in the final build.]

Studio-5 have also revealed that whilst the DS and PS3 versions share the same central core of the story, they will have differing artwork, graphics and “story developments”. 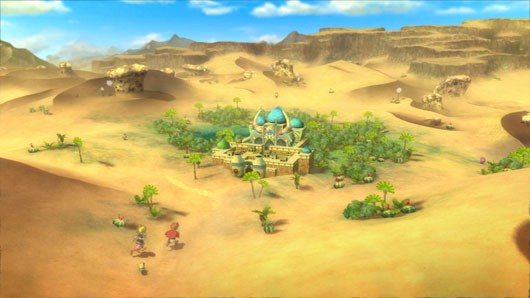 The world map of Ni No Kuni is more there as a representation of the land between levels, but unlike other areas in the game, can be spun 360º and viewed in any direction.

Once in the fantasy-based land of Ni No Kuni, the visuals take on even more of a storybook feel, with elements somehow reminding me of cartoon version of The Never Ending Story. In gameplay terms, this land is very much presented in the style of a traditional RPG; although the camera could be rotated through 360º, Ni No Kuni otherwise reminded me of Blue Dragon, especially as battles with the creatures that inhabit the land are not quite random encounters. You can see creatures from a distance on the overall map, with the action zooming in to focus in to the battle menu as you approach them. [ADDITION: Worth noting that while you may only see one creature on screen, actually going into battle may reveal two or three creatures.]

[ADDITION: Once out of the lush green environments of the forest, the later dungeon areas did even more to reinforce the similarities with Blue Dragon in terms of graphical style and presentation of combat. That said, I found the overall experience to be much more enjoyable than anything I encountered in Sakaguchi-san’s Xbox outing.] 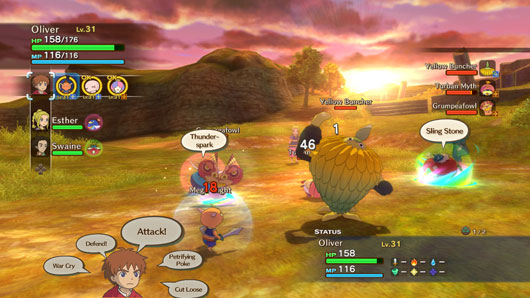 The battle menu. Note the mixture of people and creatures in your party. Also, the small symbols next to the bottom right of the picture of the creatures denotes the creatures’ class.

Combat is fairly simplistic – especially before you start to learn your basic spells – and I was just getting to grips with using my new found follower in battle when my time with the game came to an end. [ADDITION: In my latest playthrough I got to the point of using two creatures that I could bring into battle with me and had a number of new spells as Oliver. The follower creatures use “tricks” rather than spells. Certain tricks (and spells) will be more or less effective against certain enemy types – for example a water based trick/spell will be less effective against a water based creature. Both Oliver and the follower creatures have a shared health and magic bar. All this results in you needing to be quite tactical with when you swap your combatants in or out and must take into account who they are facing.] 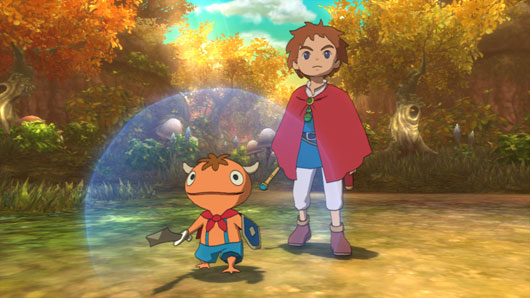 [ADDITION: Fighting through my first boss fight, against the Guardian of the Woods (pictured below) indicates an even greater level of tactics and reveals an entire new spell mechanic. You can effectively use the block option against smaller foes, but in Boss fights it becomes essential, as it needs to be engaged when they launch their bigger attacks against you. In all battles, Green and Blue orbs fall off enemies as you strike them — when collected these replenish your health and magic points. When a good portion of the way into a Boss fight, you get the chance to pick up a yellow orb that allows you to perform a powerful magic spell that acts as a finishing move.] 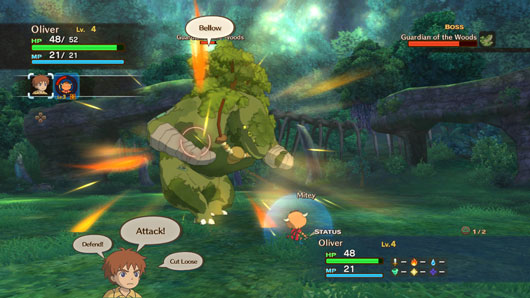 To many people, the prospect of a traditional Japanese RPG shone through the filter of a children’s cartoon might not sound that appealing – and, because of this, you may be surprised at the lavish amount of praise that I’m heaping on this game. Likewise, the inclusion of Studio Ghibli-made cutscenes might not appeal to everyone, but as I’m someone who previously loved JRPGs and has recently found no reason to journey back to them, my brief hands-on time with Ni No Kuni was enough to completely enchant me.

It may be too much to pin the label of “the saviour of the JRPG” on one game, but it certainly looks the part. I can’t wait to travel back and see the entirety of the adventure for myself and am now really looking forward to falling under its spell when it is released in January 2013.