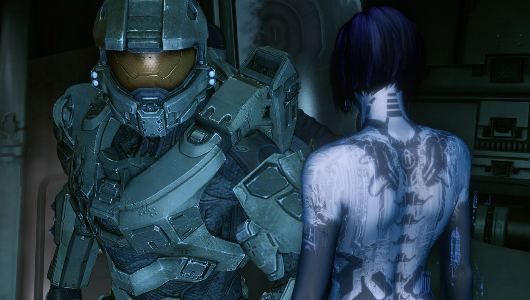 It’s crazy to think that Halo 4 is the first game that 343 Industries has ever developed, bar one HD remake. If ever a game developer had some big shoes to fill, this would indeed be it. Are they up to the challenge of picking up the story of everyone’s favourite green armoured super-soldier, or has Halo 4 miscalculated it’s slipspace jump?

After floating in the derelict aft section of the Forward Unto Dawn for years, we finally see the continuation of Master Chief and Cortana’s saga. Attacked by an unknown faction of what should be the pacified Covenant, Cortana wakes John up from his 4 year cryo-sleep to defend her and fight off the attacking aliens. But the situation escalates rapidly, as the super-soldier and AI pair discover that this isn’t a small band of rogue soldiers, but an entire Covenant fleet, and even worse, they’re all in the orbit of an unknown gigantic Forerunner planet. After a brief defence of what remains of the UNSC frigate, the Dawn and the Covie fleet are caught in a gravity well and dragged onto the mysterious planet.

Marooned, Chief and Cortana are faced with a new faction of enemies in the Prometheans, defence AI constructs of Forerunner design that work as a united front more than any other enemies in previous Halo titles. And while each of the Promethean units have glaring weakness to shoot at, the way they behave in battle means you’ll need to learn to prioritize who to kill first more than you have ever had to. Crawlers will swarm you in a pack, but are generally just a nuisance on their own, while Knights will keep their distance for the most part, only occasionally rushing you for a quick melee attack. But the Watchers will end up as your primary targets, as they can not only protect other Prometheans with hardlight shields and throwing your grenades back at you, if you don’t kill them quick enough they’ll bring other units back to life, making encounters with Prometheans much longer engagements. 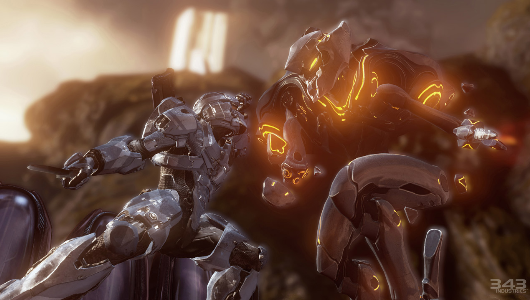 The new units aren’t the only major shake-up to the Halo formula though, even with Armour Abilities returning from Halo: Reach, now Chief and all other Spartans will always have sprint enabled, adding to the sped up feeling of Halo 4’s gameplay. The game reacts quicker to the way you play, and you have to be just as quick to keep up at times. As a result, you’ll have some small battles that feel more stressful than entire missions from other Halo games, especially on the occasions when the Covenant and Prometheans decide to work together against you.

It definitely all makes for a fast paced campaign, and unfortunately that’s one of Halo 4’s biggest setbacks, the story only took me around 6 hours to complete on normal difficulty, and more competent Halo players could probably do the same on Legendary. But for the content that is there, it’s a great play, with a rich backstory that’s explored in other media — books, terminals, Halo Waypoint — which, while this certainly fills in some of the blanks, isn’t essential to enjoy the campaign in it’s own rights.

Except the campaign isn’t on the disc by itself, thanks to the inclusion of Infinity, the in-game plot device that ties together the story of Master Chief, the blue vs. red battles on the ship’s War Games simulator and the episodic story that continues 6 months after the events of the campaign. Everything is built around the UNSC Infinity, humanity’s largest starship ever created that’s first seen being pulled onto Requiem after following Cortana’s distress signal. While the Infinity plays an important role in the story due to the characters onboard, it’s also home to an entire Spartan-IV operation, who assist the Chief while also taking on their own missions. 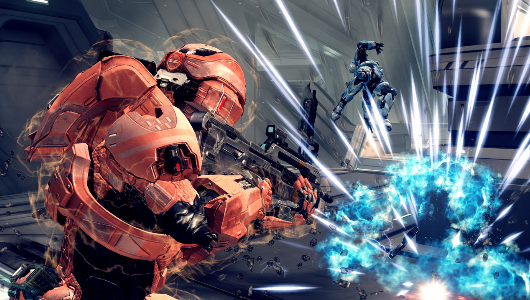 Better to be red than dead.

Spartan Ops features weekly content with the Infinity revisiting the Forerunner planet, with various Spartan-IV squads being deployed to undertake short missions, all fleshed out in story with a cinematic featuring many characters that have already been introduced. While not particularly varied, the Spartan Ops missions provide a quick taste of co-op fun taking on both Covenant and Promethean forces in a few different maps taken mostly from sections of the campaign. Sadly there doesn’t seem to be much in the way of replay value in Spartan Ops as there was in ODST and Reach’s Firefight modes that were much more varied in the way you dealt with enemies and the challenge you could set for yourself through the game changing skulls that are absent for Spartan Ops. But due to infinite respawns and no currently no objectives that you can fail, even playing solo on Legendary isn’t a major challenge as it is a way to spend 10 to 20 minutes per chapter.

Of course, if you’re looking for replay value, you’ll no doubt be hanging out in the War Games area which is Halo 4’s equivalent of previous matchmaking. Upon launch, the playlists for War Games were much more streamlined, with each gametype currently available getting it’s own selection rather than leaving it to the luck of the draw in generic playlist selections. New game modes include Regicide, a kind of mixture of VIP and Juggernaut for free-for-all matches, as well as Dominion, a base capturing team game where retaining bases will provide you with upgrades and defenses. Some modes have had some significant changes as well, such as CTF where the flag carrier can no longer drop the flag, but moves at normal pace and can use a pistol while carrying. There’s also the fan favourite infection mode under the new name of Flood, where the infected Flood players will have a unique skin applied as well as HUD, and a claw as their only weapon. 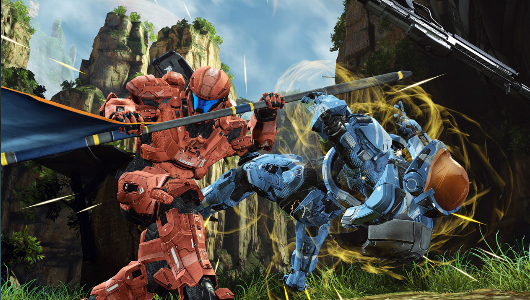 With the gameplay changes to War Games, Halo 4 has seen it’s largest change to the way people engage online, with unlockable and customisable loadouts, sprint available to all, ordnance drops earned through all support actions and non-static weapon spawns. Loadouts can now be fully customised with primary and secondary weapons from a set list, grenade types, armour abilities and brand new features; Tactical Package and Support Upgrades, both of which add a small change to your particular gameplay. This is the first time your Spartan will feel truly unique in battle when paired with the usual armour permutations and emblems you can change. So you can opt for an assault rifle if you prefer closer fights, or a DMR when you want to remove an enemy’s brain from his skull from afar. It’s completely down to how you want to play Halo 4 and the maps or gametypes you’ll be jumping into, so luckily there’s a couple of loadout slots to have all of your favourites ready at a respawn.

Halo 4’s multiplayer is undoubtedly the most controversial talking point among Halo fans, but it’s an incredibly balanced and solid online shooter that, as always, is ridiculous fun with a full group of friends. Even randoms are less of a hassle now with most game modes removing friendly fire, so there’ll be no more betraying for power weapons, especially as you could just bring your own down in ordnance.

What truly shocked me about Halo 4, is just how gorgeous the gameworld is, and how amazing it all sounds. Everything from the sounds of the assault rifle emptying it’s entire clip to viewing the absolutely monolithic design of the Forerunner architecture astound me. And this level of quality is consistent through the entire game, and has even been considered in the improved Forge mode which will now add dynamic lighting to your customised maps once you exit editing mode, adding a lot more depth to your own battlefield.

Multiplayer is very well balanced.
Your Spartan has truly become your Spartan.
Good, emotional campaign, however…
…the campaign is a little too short.
Spartan Ops so far has been a little disappointing.

While Halo 4 is by no means a bad game, in fact it’s a great game, but as 343 Industries’ first fully developed title, it’s clear that they may have tried changing things up a little too much and slightly missed out on gaming perfection for a first person shooter. But it’s definitely a worthy return to the story of Master Chief, and with the Infinity features, there’s plenty of fun to have you keep returning to Halo 4.