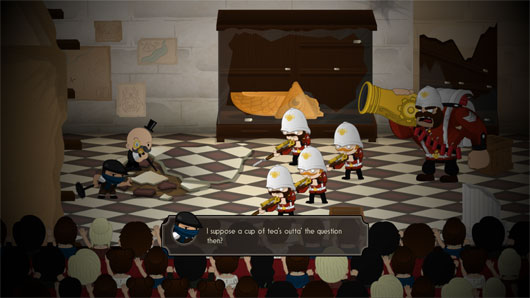 “All the game is a stage and all the men and women merely players” — This misquoted Shakespearian does a jolly fine job of summing up the premise of Foul Play. You take charge of moustached, top hat-wearing Victorian, Baron Dashforth, as he takes to the stage in a side scrolling brawler where your primary focus is not on the good olde lashings you dish out, but rather on the quality of the theatrical performance that goes with it.

You will get feedback in response to your actions, both in terms of a positive (or merely greater) score and in the reaction from the crowd that takes up the lower portion of the screen. This in itself is nicely presented, as the crowd is represented enough to be enjoyably noticeable without obstructing enough of the screen to prove distracting or annoying. 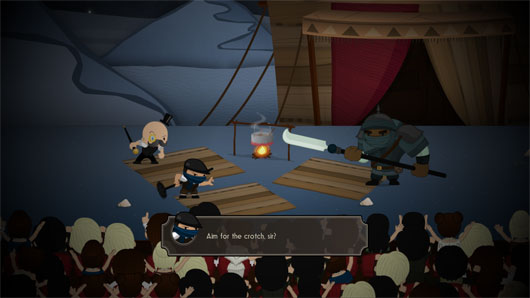 Many of the aspects of the style and appearance of the game, play up to the primary “on stage” presentation as Baron Dashforth tells you the rather remarkable (and possibly fantastical) tale of the story of his life. — For those of you who are long term listeners of BRBUK; Yes, it’s a framed narrative! — The unreliable storyteller tells his thoroughly unbelievable story as you, and up to one other friend, fisticuff your way through swarms of ‘enemy’ actors. With the other protagonist’s part played by your sidekick street urchin, Scampwick.

A lot of the amusement to be found in the game comes from the moments where you see a bit too much from behind the curtain. The flimsy set or prop, the ill-fitting costumes or just how the actors make their way off stage when beaten — rather than just flashing and disappearing (as often the case in side-scrolling beat-em ups of yesteryear) It all plays into the grander theatrical theme in a very charming, amusing and cohesive manner. 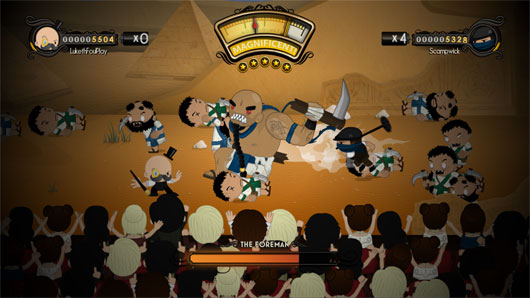 While still clearly being worked on, from my brief hands-on time it seems that the combat is shaping up nicely. The combo system is fairly forgiving, which is handy as it seems of paramount importance if you are going to gain the full approval of your demanding audience. Throws and special takedowns play their part in the combat and you can also perform team takedowns in conjunction with co-op chum, Scampwick. While these were quite devastating, they also lead to a small game-crashing bug in the demo — but this was a known issue and is being worked on, and given the early nature of this showing (I believe it was the first time it was being shown publicly when I got to see it at MCM Expo London) it is highly unlikely to be causing any sort of problem come the time of final release.

Foul Play is looking like a great vehicle for Mediatonic’s sense of humour and it is shaping up to be a fun, quirky performance that you may well want to make sure you are there in time for the curtain call on the matinee showing in the first quarter of 2013.