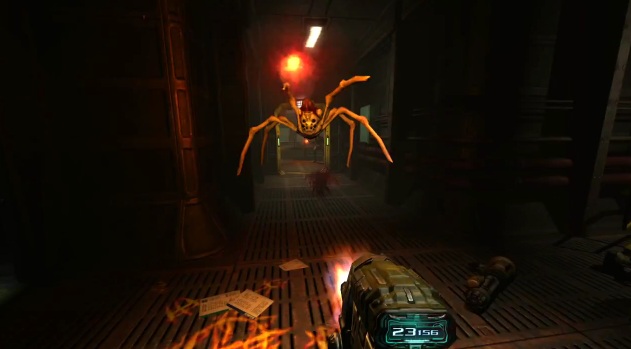 The original DOOM is, give or take, six months older than I am. So by the time I was old enough to play video games the magic that was DOOM had come and gone — what was left was it’s legacy. I could have tried to find a copy for my first system, the PlayStation, and experience it for myself, but I wasn’t really aware of first person shooters when I started playing video games. I was busy playing games like Spyro, Final Fantasy 7, and Crash Bandicoot. So, by the time I actually got around to playing anything DOOM related it was DOOM 3 for the PC. I still remember sitting at the Internet cafe playing that game and having my mind blown. Graphics-wise it was like nothing I had ever seen before. Gameplay wise, it was similar to other first person shooters but the atmosphere helped differentiate it and make it stand out. The brief time I had to play with the game stuck with me to some extent. Fast forward to 2012 where DOOM 3 had now become a divisive game for some and I had still remembered my fond yet brief memory of DOOM 3 enough to want to purchase a copy of DOOM 3: BFG Edition.

Say something nice before you criticize the game, right? Well when I purchased DOOM 3: BFG Edition I considered the fact DOOM and DOOM 2 were included as a bonus, I had primarily bought this package to play DOOM 3 in high definition. Upon playing DOOM and DOOM 2 for the first time ever I came to realize that those games were (still) fantastic games. The sense of speed was something I rarely got to experience in games let alone first person shooters. The level designs were incredibly well thought out and I desperately wanted to find every secret and collect every item, not because I’m a completionist, but because each level begged to be explored. The reward of finding weapons, armor, ammo, and other items was a bonus. I had previously played the original Wolfenstein 3D (which I had downloaded from PSN) and had enjoyed that game quite a bit too. With both DOOM and DOOM 2 holding up incredibly well and my fond memory of DOOM 3 leading the charge, up to this point it had been a wonderful experience. A great collection I would have recommended to anybody. I felt ready to jump into DOOM 3 and give those monsters hell!

The original Doom manages to still be a better game than 3.

I was ready to give DOOM 3 fair consideration and lower my expectations, despite the fact that the previous games had blown me away. Plus, I was aware that sometimes memories should be sometimes left in the past. Regardless I fired up the campaign and began my trip through Mars. For an older game re-imagined in high definition I was initially impressed with the graphics. Sure there were some muddy textures here and there but id had cleaned up the game pretty well. I had remembered why the graphics had impressed me so much back when I had originally played the game years ago.

The problem I had with the game was the playing it. For a game that has a horror setting there were no moments where I felt scared of the stupid, obvious, and repetitive monster closet jump scares. I never even felt tense walking down the barely lit hallways in the environment. Perhaps the worst part about the jump scares was that it meant that I had to engage in the boring and incredibly weak combat. Every single weapon felt like a pea shooter and while the enemy responses made it feel like I was doing some damage, pumping away bullets to drop a monster got old really quick. It felt like a bland and soulless shooter that required far more benefits of the doubt than it deserved. Considering the first two games in the series, DOOM 3 not having fun combat is totally unacceptable. I understand that DOOM 3‘s combat is supposed to be mimicking the other games in the series, but I didn’t have any fun playing it. I can only recommend this game to you if you are the kind of person who likes to play bland, boring, and monotonous games. If you like outdated first person shooters with terrible pacing, than by all means go pick up a copy of DOOM 3 BFG Edition. Even people who get scared easily by horror movies or video games, have nothing to fear when it comes to this game. Nothing about this game is scary. Whatever fond memories you have of Doom 3 are better off staying as just memories. 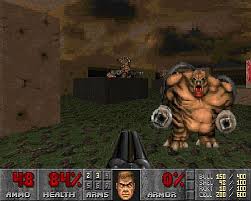 When it comes to these HD re-releases that have come out this generation, I have been able to relive some of my favorite gaming moments of yesteryear, while also being able to experience some games I might of missed out on. When it’s the latter of the two possibilities, it would seem reasonable to assume that these re-releases would be the best way to play the game for the first time. The problem with these re-releases is that they depend on a couple of different factors: How well have the developers have ported the game? Does the gameplay still meet the standards you come to expect in this current generation? And finally, if the gameplay doesn’t meet your standards anymore is that because you have different standards now, or because you don’t remember the game as fondly as you thought — and some memories are just better left in the past?

These are all topics I plan on continuing to explore as I dive further into these HD collections. Many of these games I will be playing for the first time. While in some cases I will be returning to old favorites to see if they still hold up and to see if my opinion on them still reigns true. This is a way for me to study and dissect the ageing of games in hopes to separate the games best played while wearing rose-tinted glasses, from the true classics that could be recommended to anyone.