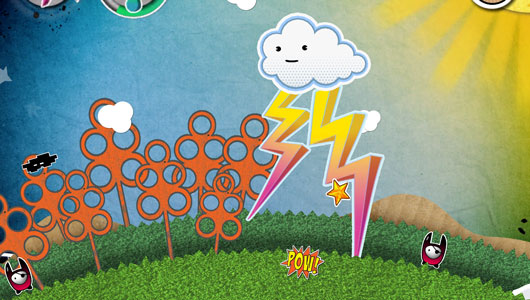 In a country as soaked in rain and eternally grey as the United Kingdom, you can’t blame a company like Blitz Games Studios for putting together a product like Kumo Lumo – roughly translating as “bright cloud”. It’s a cute little “rain-em-up” in which you play as Lumo, a deep-voiced raincloud and valiant protector of his home planet, and it’s up to you to keep the planet flourishing while disposing of baddies through the means of a liberal soaking.

Lumo has two powers at his disposal: rain and lightning bolts. He can rain on invading nasties as they trot along the ground below, but rain is primarily used to help maintain the planet’s health, which is key to knocking out those three star ratings. From growing forests and raising mountains through to replenishing oceans, each is key to your success. Lumo is rewarded for his efforts with clouds, spouts of water from the backs of whales and sheep (they are fluffily similar to clouds after all) which you can collect to replenish Lumo’s water supplies.

Kumo Lumo keeps things challenging by introducing larger enemies such as volcanoes, which spit out voluminous clouds of black smoke – contact with both is fatal. To counter this, you can unlock the power of lightning – hidden away until you have collected, or purchased, enough Gold – to rapidly dispatch foes with a single strike. No pun intended. 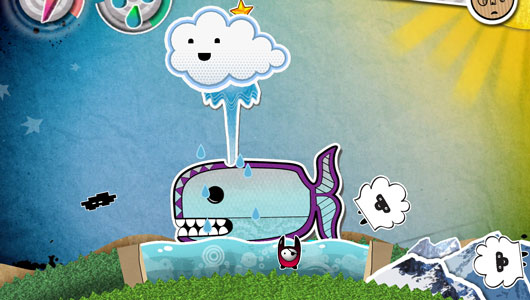 Clearing a stage with a perfect rating generally involves a large amount of floating around, raining on trees and enemies to top up the three-tier meter which dishes out the stars. If played at length, Kumo Lumo can occasionally feel like the completion of a checklist, filling in a form to ensure every single thing has been done to earn full marks. However, if taken gently – and it should be, to make the most of the game’s limited number of stages – each level is a rewarding and joyous ten-minute treat.

Save for getting your cloud legs, it’s brilliant fun to play. Getting to grips with moving around and rotating the planet is initially tricky, but it soon becomes SWAT-team-precise. Any mishaps which befall Lumo are usually your own fault, whether it’s swiping the planet too fast and running into an angry black cloud or simply getting too excitable with your rain supply without topping it up. Nothing feels balanced against you, which deserves extra kudos when the game itself is free.

That said, you will occasionally face boss fights and may consider, as I eventually did, splashing out a little for some upgrades to how much rain you can carry. Things get a little crazier as you upgrade your lightning meter, which tops up over time – akin to the energy meter in CSR Racing or waiting for something to be carried out in The Sims Freeplay or Dragonvale. As some stages require you to have lightning, there will be no escaping the occasional wait or aimless drift around a stage, waiting for the meter to top up – but these moments are few and far between.

Pretty scrapbook visuals and bouncy soundscape
Original and delivers fun in buckets (sorry)
The cloud says “aw yeah” and sounds like Issac Hayes
Take your time, or it will drag

By and large, Kumo Lumo is a fantastic free little number for your iOS device. Between its charming scrapbook stylings and Lumo’s deep, ever-amusing voice, there is a lot of charm layered over the top of some original ideas and, as long as you take your time, it makes for a rewarding and wallet-friendly addition to your app library.

The author made in-app purchases during this review.
Official Game Site

Space Hulk: Tactics is a turn-based tactics adaptation of the...

Michael seems to really like Gooigi. Urm… good for him?