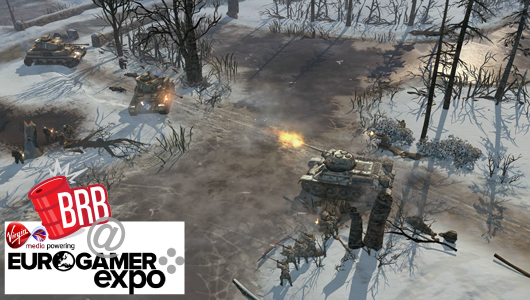 Relic are known within the PC world as the company that pretty much single-handedly redefined what Real Time Strategy can be. With Company Of Heroes, and later the multiple iterations of Dawn Of War 2, they proved that RTS games don’t need to be about base-building, or which side can produce the biggest army in the shortest time. Relic instead questioned the fundamentals of the genre by asking, “why not control a small group of specialized units in real time, directing them throughout maps with areas of cover and forcing the player to actually be strategic, rather than sitting around queueing up build orders?”

Now I’ll be straight with you: I never played Company Of Heroes. I played a lot of Dawn Of War 2, but that’s not the true predecessor to this game. As a result, I came in knowing the underlying mechanics of the game – and the strategies required to survive pretty much inside and out – but didn’t have much of a clue as to which World War the game is based in, nor if there is any overarching story component. So, to lay down the bottom line: I’m judging this game entirely off of its gameplay… Which is excellent.

The demo walked me through an early part of the game, where a team of Allied soldiers has been instructed to retake a small town from enemy control. I was given three groups of several units, and the only ability I had access to outside of moving, taking cover and shooting was a timed grenade. But the lack of ability options didn’t matter. The map, as seems standard in Relic games, was designed for the player to work with flanking strategies and cover opportunities and, as lame as it sounds, I was like a kid in a candy store. Special abilities be damned – I was enjoying splitting my units up, placing some in cover within direct eye-line of the bulk of the enemy infantry, moving a second platoon around the side of the town to ultimately flank inward, and a third platoon in a building, granting them maximum cover. It’s a level of strategy that you can certainly derive from more traditional RTS games, but for whatever reason – maybe exclusively the cover aspect – it’s way more satisfying to me in this form.

Upon seizing a couple of capture points within the town, I opted to withdraw what was left of my forces back to a resupply zone, where I was able to replace my injured units with healthy ones. Once that was done, I took one more building on the offensive, before the game changed everything up by putting me, for the first time, on the defensive. I was instructed to defend the building I just captured from several oncoming waves of enemy units – and defend it I did, with the help of a new heavy infantry unit that could suppress the enemy in a manner that’s similar to my other big RTS squeeze, the aforementioned Dawn Of War 2. While that suppressing fire was laid down, I hastily negotiated some other units around the map to flank the incoming waves, ultimately catching them off-guard and resulting in murder tactics the likes of which have not been seen since that “clever girl…” guy took a Velociraptor to the jugular in Jurassic Park.

The final part of the mission involved capturing and repairing a tank and then using it to destroy a rival one. It was also at this point that I was given the ability to call in an airstrike. Little did I know that, in Company Of Heroes 2, an airstrike means business. It doesn’t just hit once, it goes on for several fly-overs. I was not prepared for this eventuality, so suffice to say I lost a lot of what I assume were very good (albeit virtual) men – probably with (albeit virtual) families waiting for them back home – when I ordered them to wipe up any remaining troops in the area that I’d designated as the target for my airstrike. As the men following my poorly thought-out orders were rained upon by a cavalcade of falling explosives, I saluted their bravery and then remembered I had this whole ‘tank’ thing to deal with.

Fortunately, despite my inadvertent – and totally pointless – sacrifice of many good men, I captured the tank and went to proverbial town on the opposing forces.