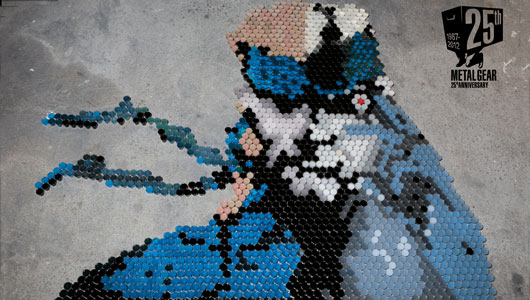 2,100 shots is a lot, regardless of the situation – you’re either rubbish with a gun or born with a liver of steel. Or, to put another spin on it, the Loading gaming bar in Falmouth, Cornwall has hit the news again this week, creating an image of Solid Snake using 2,100 shot glasses and presenting a framed print of the work to Hideo Kojima himself. 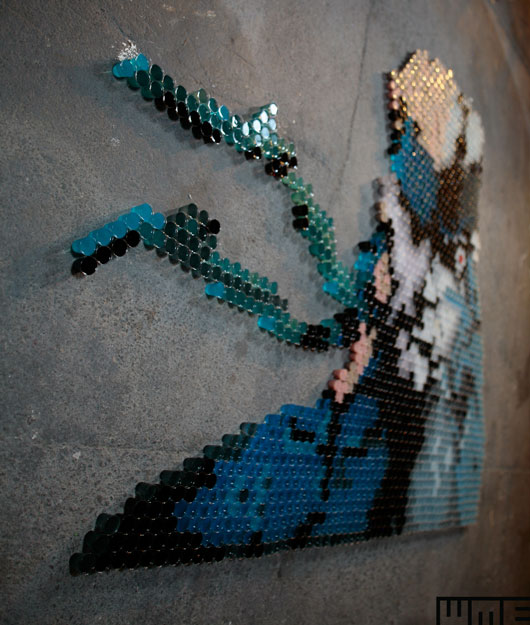 Loading, which has been running for two years and is currently aiming to open a London venue, is well known for coming up with visually appealing – or unappealing – drink creations. You’ll have spotted Minecraft shooters, matching Portal 2 shots and the world’s most disgusting cocktails (the ones that look like poo and blood) here there and everywhere recently. To celebrate the 25th anniversary of the Metal Gear series, Loading owner James Dance and designer Joseph Payne collaborated to create a dotted design, 25 Shades of Snake which they replicated on a warehouse floor using the glasses, each filled with a different shade of paint.

Presumably without keeping a straight face, Dance said of the project:The finished design took 12 hours to complete and takes up a 2m squared area. Once complete, an A3 print was framed and handed to Hideo Kojima following his presentation of the annual BAFTA Games Lecture on Friday 28th September, who promised to put it up in his office in Roppongi Hills, Tokyo.

“Once we found Konami’s Codec code and got through to them to discuss the idea of a drink, it was the logical step after my Octocamo invisible/tap water cocktail idea was deemed a failure.

“Whenever Hideo Kojima visits countries I’m sure he gets showered with gifts relevant to the culture, so we thought we’d do our bit to uphold the stereotype of England being a nation of drinkers with this liquid tribute to Solid SNake. I’m no artist, never was, never will be, I’m just an old fan hired to do some wet work.”

…Very good. The full design can be viewed at Payne’s personal blog. Loading is based in Falmouth, Cornwall, and offers up free gaming on consoles and PCs along with free WiFi for patrons – but if you’d like to see one in London, you can donate to the Loading London Indiegogo here.