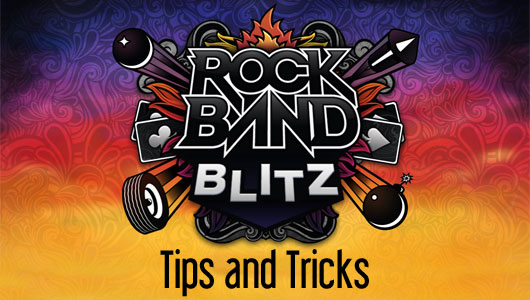 Rock Band Blitz has graced PSN and XBLA for a week now, comfortably giving your DLC a new lease of life long after your plastic instruments started collecting dust. For those of you just starting out in the world of Blitz, we’ve put together some tips and tricks for how to best max out your scores.

Blitz‘s core gameplay is made up of a few initially complex-looking systems: Blitz, multipliers, score tiers and checkpoints and whatnot. Breaking them down one-by-one reveals that there isn’t actually much to think about all at once!

Hit enough notes without making any mistakes and Blitz mode is your reward. It’s a streak which awards up to 500 points every ten notes played, gradually rewarding more bonus points the longer you play flawlessly. The secret to nailing Blitz mode, at first, is to play tracks sequentially until you feel confident, maxing out each multiplier and then jumping to another track as soon as you spot a big enough gap in the notes. Four mistakes will wipe out Blitz until you can build it back up again, so take care if you want to hold onto those extra points.

Scoring points in Blitz is easy. Simply punch out the notes on the left and right channels of each track – I can’t stress enough: switch your control scheme to Freakish to avoid major hand cramp – until you max out the multiplier on that track. Each track has its own multiplier, built up by notes gradually. The great thing about Blitz‘s multipliers is that they stack and stay stacked, so if you want to jump out of a track and switch to another one without filling the multiplier up that’s okay – you can simply switch back and finish it off later. This is great if there’s a massive chain of notes coming up on a different track.

Once you have filled up the multiplier on a track – indicated by the “road” being completely coloured in, rather than bordered by black bars on each side – move onto another, and fill it up too. Filling up every track before a checkpoint is the basic key to huge points: filling in every one can extend your multiplier’s reach by up to three multiples (for example, from 3x to 7x), but is ultimately limited by the least-filled-in track.

Big tip: learn your songs. Do a dry run without power-ups and the like to learn where tracks – more often, vocals and keyboards – stop during sections so you can tap them out before anything else and top-up their multipliers first. 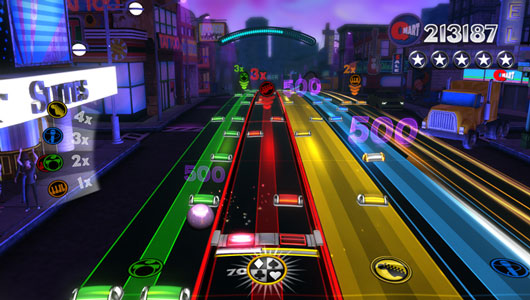 Things can get pretty hectic in Rock Band Blitz. Play dry runs through songs you don’t know so you can plan which sections to tackle first – your multiplier will thank you!

Power-ups are, multiplier stacks aside, your best friend in Rock Band Blitz. There are three kinds available, and one of each kind can be used during a song. Power-ups cost a certain amount of coins per use, and coins are earned by playing songs and taking part in Rock Band World challenges and Score Wars. Let’s cover each of them.

Tip: Restarting a song won’t return the coins you used to buy power-ups. So you’re better off finishing a song and winning some back!

Overdrive power-ups work like Overdrive inside Rock Band or Star Power inside Guitar Hero. Built up by playing glowing white notes and deployed at a point of your choosing, these point boosters keep going as long as you keep that bar topped up. Here’s a run-down of each one.

Tip: Holding onto Point Doubler towards the end of a song can double your point bonuses for each track at the end. Ideal for longer tracks with big multipliers, it can push you from one star rating to another at the last minute! 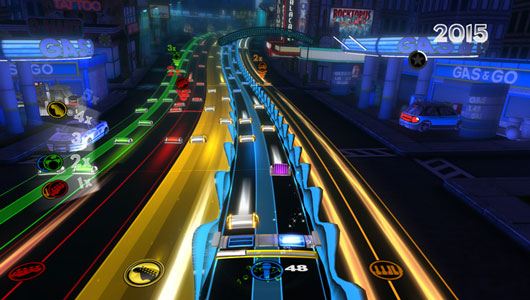 Purple gems like these unleash the Note Power-Up you selected at the start of the song. Get to them if you can.

Note power-ups sporadically appear during songs in place of regular notes, and each one carries out a unique action. Some of these glowing purple gems are more passive than others, and twitchy fingers are required for nearly every single one. So be ready!

Cheap-and-cheerful point boosters, Track power-ups will boost any of the tracks in a song – drums, bass, guitar, vocals and keys – by multiplying each note’s point worth by 1.5 times. So if you’re playing one of Rock Band‘s hundreds of hardcore metal songs, you’re probably gonna want to opt for Super Guitar. Rap goes best with Super Vocals, new wave loves Super Keys, and so on. As before, do a dry run of a song and note which section has the most notes – and run with it!

Tip: This combo works best on songs with short or no solos at all, allowing you to make the best use of Bandmate rather than leave your Overdrive high and dry during single-track episodes. 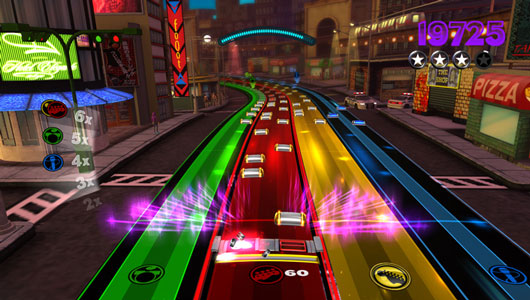 Sections like this are made for Bandmate and Jackpot. Playing white Overdrive notes whilst in Overdrive will keep the meter topped up!

Rock Band World and Score Wars are great tools for gaining extra coins for buying power-ups and Blitz Cred, which is used to rank you and your friends on the general leaderboards. Rock Band World requires a Facebook account to use.

Rock Band World features weekly-updated goals which you can pick and choose at. These span genres, artists and decades, and each one rewards you with huge stacks of coins and Blitz Cred. If you’re running out of coins, jump onto Facebook and select a few goals. They’re ready to play as soon as you join them on Rock Band World, and require no further activity other than playing relevant songs to complete.

Score Wars can be fought between you and friends on the same console. There are two ways of instigating a Score War: challenge a friend over Facebook using Rock Band World, or by looking at Rock Band Blitz‘s Recommended screen, which will occasionally match you and a friend up to play a song you both own. Easy enough to give a quick turn and come back to, Score Wars last three days, and can be attempted as many times as you like. Both winner and loser come away with Blitz Cred and coins to spend, so if the option comes up and your songs are drying up, it’s hard to turn a Score War down.

Getting better at Rock Band Blitz involves a combination of planning, practice and memorising song structures. Choosing the right power-ups for each song can involve some trial and error, and finding combos that work for you and your playing style. Give new songs a dry run before jumping in with a full loadout: just because the game says that a particular track is hugely difficult doesn’t mean that it’s necessarily the best one to go for – and you might do better with a rhythmically simpler track which actually features more notes to play.

The basics of thriving are thus: practice, learn songs, make sure you mark up every multiplier and always, always make sure you’re playing something. If you’re holding a long note and a flurry of others are flying past you, you’re missing out – switch over and build up the multiplier for that track and save yourself a headache at the next checkpoint. Rock Band Blitz rewards fast fingers and quick thinking on the go; so jump in, flex those digits and experiment with everything on offer. Now go and get those high scores!