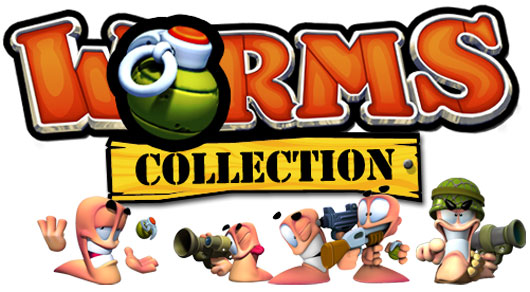 As a gamer you are probably, at least loosely, aware of the zany weapons and turn based combat that is at the heart of all the games available in the Worms Collection. The disc based Collection consists of three previously released XBLA and PSN titles; The Original Worms, Worms 2: Armageddon and Worms Ultimate Mayhem — which consists of content that originally made up Worms 3D and Worms 4: Mayhem. The collection also includes all of the DLC from Armageddon. For the die-hard Worms fan it is *nearly* the ultimate collection, only missing out on the prestigious title as it excludes later additions to the franchise such as Worms: Forts and spin-off titles like Worms: Golf.

While we will revisit the issue of price in a moment, the value for money proposition is without question, you get four lengthy campaigns, which each contain roughly 8-10 hours of gameplay. You also get a whole bundle of challenge levels and quick battles that can be played in single player. The multiplayer and online functionalities from all three downloadable titles are also available on the disc. The campaigns is where Worms games have always sadly fallen short to the quality of the multiplayer options. Travelling through the ages of Worms available on this collection, it is quite clear than Team 17 have never quite got this right. The campaigns come across more as a group of loosely associated minigames or puzzles that need to be solved in a very confined and linear fashion, relying on you solving one challenge before the next becomes available. This often leads to difficulty spikes and needing to replay a level more often than you would naturally want to. 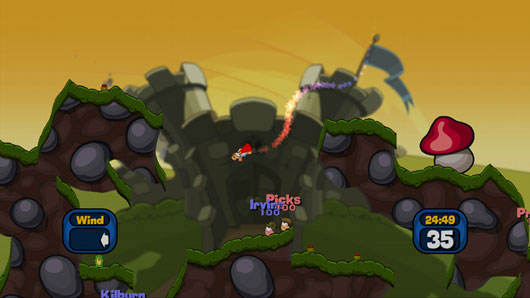 It is a bird? Is it a plane? No…it’s a SUPER SHEEP!!1! Flying through the air in the world of Worms 2: Armageddon.

Many campaign levels have a single solution to them, or where simply one misplaced jump can leave you wasting thirty minutes of your life. Watching an opponent fling themselves suicidally into the water is amusing — at least for the non-victim — in multiplayer, but doing so yourself in single player is never anything short of an annoyance. All too many of the campaign levels, particularly in the 3D versions, rely on the jumping mechanic and other environmental traversal mechanics such as jetpacks, ninja ropes and girders. This just serves to undermine the game controls and highlight how poorly these are implemented. It is almost entirely forgivable in the random generated worlds of Multiplayer mayhem, but can all too often lead to frustration when it means having to replay a whole level just because the controls of the game let you down.
I can not go much further without discussing the issue of price — and here price really *is* an issue. The original Worms is good, if a bit overly simplistic, but the transition to the world of 3D was not the smoothest for the series. As such, the content available within Worms Ultimate Mayhem — Worms 3D and Worms 4: Mayhem — is not of the highest quality. It is fun, of a reasonable quality and for a fan in the Worms series they prove, at the very least, to be a number of hours of destructive distractions. Where this package does start to become a good deal is when you start to take the DLC into account. Even though this is almost half the price of a full cost retail release, the component games can be purchased separately for a similar or lower price via XBLA or PSN — especially given that you are probably just beter off picking up Worms 2: Armageddon in isolation — but the Expansion Pack DLC adds a lot of good and interesting content that adds up to better value, both in financially terms and in the quality of gaming experience, than the other games that come in the package. 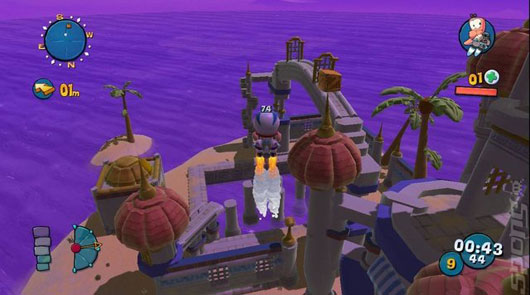 Jet Packing up the 3D and heading back to the world of 2D! Thanks!

A Warzone mode (where you battle against a series of increasingly difficult sets of enemies across different levels with various limited weapon options) and a Body Count mode (a variation on a Survival mode) are both added in just the Battlepack and come with a set of six new weapons — including my new favourite the Ferrets which crawl along the scenery until they encounter an enemy worm, at which point they repeatedly explode. The Battlepack may be the largest of the DLC packs but there are five others that include other worthy content such as Puzzle, Fort and Time Attack challenges. For the uninitiated, it may seem a limitation that all of the DLC relates to the 2D title rather than either of the later 3D titles, but it is welcomed as Armageddon is arguably a high point of the franchise as a whole — playing through the other games again further cemented this belief!
Ace turned based worm warfare strategy mayhem
Tonnes of content
Good value for money for fans of the series yet to take the plunge
3D Games are not of great quality
Campaign modes are overly linear and can be annoyingly so.
Would have been nice to have better front end presentation and have cleaned up some smaller technical issues such as long slow loading times

Recommending a disc based re-release of a collection of existing downloadable titles can be a bit of a minefield. Any big fan of the genre or series has probably already invested in at least one of the downloadable versions, which will likely make this a less attractive package. Any person who is not already a fan of the series is hardly likely to run out and spend a higher price just to get all the games available. However, if you are a fan that was previously sat on the fence, or simply did not have internet access, then this could be the ideal solution for you. Likewise, any fan that has yet to pick up Armageddon, this could be a good way of getting your worm on.  If you view buying the Collection as purchasing Armageddon and all the DLC, while getting Worms and Ultimate Mayhem as additional freebies then it becomes all the more attractive. All that said, you are really not going to get the full value out of any Worms title without playing it in multiplayer, and even with the modern additions of online multiplayer, Worms is still, at least to my mind, one of the best classic examples of same couch combative four player gaming known to man…or invertebrate!