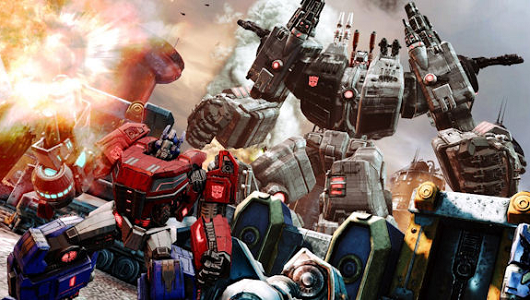 Cybertron can no longer sustain the life of its inhabitants, the Transformers, and so a new source of energy must be found. Shortly after the events in War for Cybertron, the sequel takes place during the Autobots and Decepticons final days on their home planet. Throughout the game you’ll take on the role of famous Transformers from both sides of the war; Optimus Prime, Megatron, Soundwave, the mighty Grimlock and even more than meets the eye.

The game begins in the same manner that the demo began — which we previewed a little while ago — playing as the scout, Bumblebee, aboard the Autobot Ark as it leaves Cybertron to escape through a space bridge portal. At the end of this tutorial mission, we’re presented with the iconic clash between Optimus Prime and Megatron with some extra dialogue between the two, and Bumblebee’s epic sacrifice that has him take a potentially fatal shot to the chest that was intended for Optimus. The story shifts to six days before the launch of the Ark. We’re now in command of Optimus, as he rallies his forces to defend the Ark and Autobot City from a full-on Decepticon assault. The situation escalates quickly, as Optimus discovers that the sleeping giant, Metroplex, will heed the call of the last Prime to assist, and from here the true scale of Fall of Cybertron is shown.

Unlike War for Cybertron, each mission has only one playable character with the removal of campaign co-op, but this has allowed for some pretty extensive gameplay in which different characters have levels designed around their particular play style. There’s a stealth mission for Autobot cloaker Cliffjumper, one with lots of platforms to grapple to for Jazz, a full-on aerial assault for the Combaticon chopper, Vortex, and eventually a pure path of destruction for the leader of the Dinobots, Grimlock. This results in one campaign that’s split between the two factions with a varying pace, occasionally switching between characters at a moment’s notice. The locales are also a lot more varied than War for Cybertron’s simple grey and brown setting, giving some major aesthetic changes which take us from rusted-over ruins built in a dust storm, to the dank, toxic, dripping underground of Cybertron where the Insecticons dwell. While being a vast world with rich environments, Cybertron is an entire planet ravaged by war, with fallen Transformers from both sides of the conflict spread out across the land. Combine that with the game’s incredible soundtrack, and you get the true atmosphere of a world slowly being destroyed by conflict.

Often the difficulty level will spike throughout the campaign, not unlike its predecessor. This tends to occur when the game’s no-cover system philosophy is directly contrast to encounters that really only work in that format.

The campaign is a stark contrast to War for Cybertron’s highly structured campaigns, and the variety offered in all of the missions and characters best shows off some of the gameplay changes made in the sequel. Cliffjumper’s stealth mission even utilizes tunnels that the Autobot can scan his surroundings from, but at the same time the mission adds the Guardian class Decepticons, which can detect Cliff even while cloaked and transform into aggressive soldiers when they spot him. Then there are those moments that play like nothing else in the game: Bruticus and Grimlock for example, play nothing like the rest of the cast, with very different control sets to best display their sheer size and raw power. 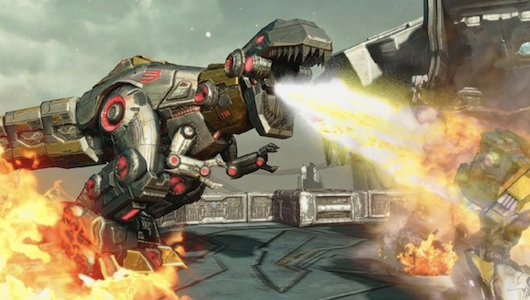 In Multiplayer the gameplay is completely down to you. Rather than picking your character from set models, each class has a number of different parts to make your own Transformer with the chest determining your vehicle mode. You can still opt to use the full character setup as an armour set, allowing you to wage war online as your favourite Autobots or Decepticons. The aesthetic parts are all purchased with Energon shards you earn for your efforts online, and buying a part from one armour set will discount the price if you later decide to buy the full set at once. Weapons, upgrades and abilities, however, are based on your class level that you increase via XP earned through your online performance. There are a number of choices available for the four different classes, which when unlocked can mean your Transformer plays very differently to other players’. Each weapon and ability has space for one upgrade, with each dramatically changing the way they behave, from speeding up the wind-up time of the Titan class’ Scrapmaker to increasing the amount of time the Infiltrator can stay cloaked.

War for Cybertron’s multiplayer had a mild case of Cybertronian plague, resulting in some issues when trying to play with your friends on the same team, or being booted out of a match because the host threw a Grimlock hissy fit and left. Fall of Cybertron’s multiplayer has resolved these issues, and by the AllSpark, that makes it incredible fun to play. A third person shooter that doesn’t rely on a cover system, replacing it with vehicular modes. So it’s no surprise that standard game modes like Team Deathmatch, Conquest and CTF will be familiar, but play like only a Transformers game can. Sadly, with fixing previous issues, some problems with balancing seem to be present. With Infiltrators being completely underpowered and certain combinations of weapons and abilities on the Titan class rendering them nigh unstoppable from the front. This will no doubt be refined in future updates, and definitely doesn’t spoil the majority of what is a good, solid online shooter. 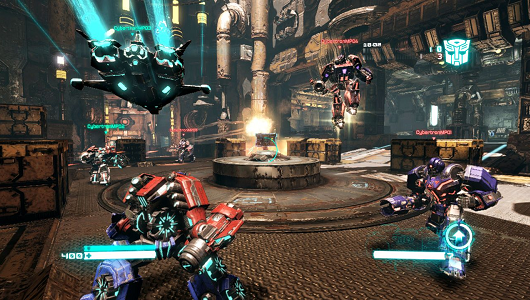 If crushing AI bots and cons is more your thing, and you want to do it with friends or randoms, Escalation mode offers you the chance to do both. While there are no huge changes, Fall of Cybertron’s wave defence mode offers some good metal crushing action with up to three other players, with the addition of being able to play in public lobbies for people to drop in and out. There are only four, predetermined characters to choose from, sadly, with their abilities and starting weapons also out of your control. This means that if you join a game mid-way through, you may be stuck with the one character you’re terrible with, but let’s just consider it multiplayer training. By defeating enemies, you’ll earn shards that you can spend opening doors, purchasing weapons, health and ammo, or even setting traps that can take out multiple bots quickly.

Transformers Fall of Cybertron isn’t a huge leap from its prequel, but it manages to fix practically every minor issue there was while adding a campaign with a much larger scale and deeper connection with the characters, but sadly omitting the boss battles that War for Cybertron had in bulk loads. What will hopefully keep gamers interested in Fall of Cybertron are the online multiplayer modes, but we’ll have to wait to see, ’till all are one.