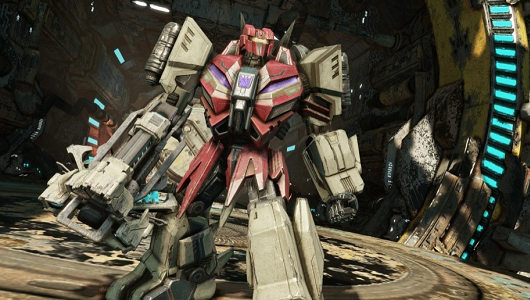 The demo comes preloaded with two extracts from campaign missions, as well as a trimmed down version of the multiplayer, including two game types and one map. The demo’s first campaign mission, Exodus, serves as a tutorial mission to give new players a feel for the game, and veteran players a chance to see the improvements made. You’ll take control of Bumblebee aboard the last Autobot escape vessel leaving Cybertron, the Ark. While en route to a wormhole that will lead the Autobots to prehistoric Earth, the Ark comes under attack and is boarded by the Decepticons. A brief battle on the bridge gives you the option to change your look inversion settings, and get your first taste of the standard combat controls. After this, Bumblebee is tasked with getting the weapon systems back online, and must traverse the Decepticon infested Ark to do so. To get around obstacles, you’ll be instructed on how to use the more basic functions of the Transformers, jumping, dashing, melee attacks and eventually the ability to transform in vehicle mode. As far as tutorial missions go, it’s like teaching Dinobots how to suck Insecticon eggs up until the point of being able to transform, but from that point onwards Bumblebee launches a full on frontal assault on the Decepticon forces in order to help Optimus Prime who’s caught in a confrontation with Megatron.

This is where the demo’s first mission and tutorial ended, and while the core gameplay remains largely unchanged, there have been a few tweaks that I noticed. Primarily, the lack of a second special ability, which has been replaced with a dash for all Transformers. Unlike in War for Cybertron, the dash now serves the purpose of a quick movement in one direction, like many third person games have with an evade, but if held down, the dash button will also make your character sprint. One of my biggest gripes with the previous game was how cumbersome the movement was in some of the classes, especially the soldiers which made them easy targets, but now they all have the ability to dodge and run, speeding up the game while also allowing more opportunities. There also seems to be the complete omission of grenades within the game, a risky move for shooter games of this day, but given how unrefined the actual grenade throw was in the first game, this looks like a good call.

The second mission of the demo, Death From Above, puts you in the place of Vortex, a Decepticon helicopter and part of the Combaticons team that can combine to form Bruticus. Tentatively lead by Starscream, the Combaticons have planned to hijack an Autobot transport to steal the Energon it holds. Blast Off and Vortex are tasked with clearing a path for Brawl who will take out the supports for a nearby bridge. The first thing to notice about this mission, is just how much larger the playable area has become. The path you take is still linear, but you get a lot more room to move about, allowing you to tackle that path anyway you want. After a brief flying section in which you try to keep up with Blast Off and shoot the homing mines that are locking onto him, you land in front of a group of Autobots and the you’re instructed to use the Shockwave special ability, destroying them all in the blast. From here, combat really opens up for Vortex, and you have the option of flying straight over the combat at the risk of getting shot out of the sky, or taking the Autobots head on.

Before combat though, you have the option of purchasing upgrades through Teletraan 1, an in-game store for upgrading things like your health and shields, changing your weapon loadout or buying consumable perks such as deployable turrets. This could be a big game changer for the difficulty of the campaign, as the enemies are already hitting harder than before and these are just nameless Autobot soldiers. So the addition of upgrades could suggest that the harder difficulties will become even tougher than before. So without access to high explosives in the form of grenades, what could possibly give you an edge over the campaign’s enemies? It’s crazy to say this, but the ability to change which hand your gun is in on the fly! In a game with no cover system, this is actually more useful than it sounds, as now you’ll be able to shoot from behind cover on either left or right, without having to have the entire character vulnerable. 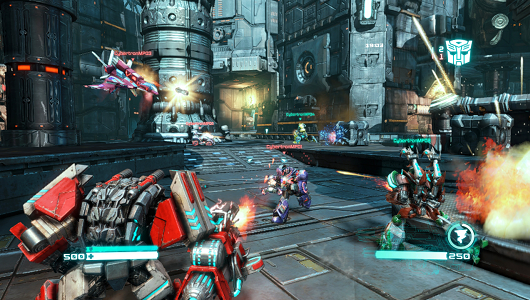 This is the real heavy metal war.

The multiplayer section of the demo gives players a glimpse at how the character and loadout customisation will work. You can now change individual pieces of each of the four classes, for an entirely unqiue look when combined with the colour options as well. You’ll have to level up your characters in order to unlock new abilities, perks and character pieces in the final game, and there are only a few available for unlock in the demo. The two game modes available for play, Team Deathmatch and Conquest, will have teams face off on the Array map and really displays what many loved about War for Cybertron. The ability to transform and utilize vehicle mode effectively can win or lose you the match, and having to adapt to other people constantly changing tactics really keeps you on your toes.

The demo is available now on Xbox Live and PSN, with the full game being released towards the end of this month. I recommend you at least try the demo out while you can, or have a look at the Retrospective Ramble for Transformers War for Cybertron for another take on the first title.