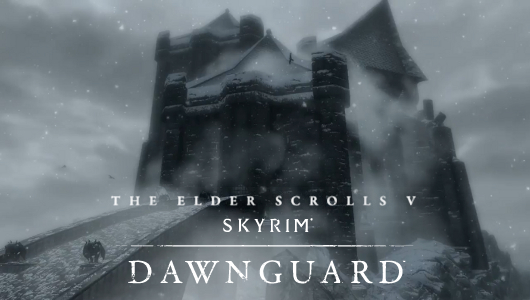 Dawnguard is the first of hopefully many “mini” expansions for The Elder Scrolls V: Skyrim that adds a plethora of new things for your personal Dovahkiin to do. While it doesn’t blow expectations out of the water, Skyrim’s first DLC sets a good bar for future add-ons to follow.

Dawnguard, the DLC, focuses on the Dawnguard, an ancient group of vampire hunters who are reforming in light of a growing vampire menace in Skyrim. These vampires are led by one Lord Harkon, who is on a mission to fulfill a prophecy to rid vampire-kind of its greatest weakness: the Sun. While your story in this fight starts with you joining up with the Dawnguard, you very quickly get to decide which faction you’d like to shack up with.

As to be expected, your choice doesn’t have too much impact on what quests you do or where you do them, as both factions are trying to get to the same goal for different purposes. There are some minor differences here and there, but what your choice does have a major impact on is the story that’s told around you, and how the denizens of Skyrim, the Dawnguard, and the Vampires react to you.

Siding yourself with Lord Harkon and his vampires gives you immediate access to the DLC’s most interesting gameplay mechanic: the Vampire Lord form. This of course makes you a vampire in Skyrim’s basic sense, but it also lets you transform into a third-person wrecking ball of vampiric destruction, much like the Werewolf’s beast form, but with, you know, more sparkling.

I kid, of course, but only slightly. The major difference between the Vampire Lord and the Werewolf is that the vampire has access to an array of magical abilities (see, sparkles!) at its disposal in addition to being able to go into fisticuffs mode and beat its enemies to a pulp old-school style. The magical abilities are fun to play around with and can make for some interesting encounters. The form itself is just as unwieldy as the Werewolf form, and can make getting through some of the tighter areas of the game more of a problem than it’s worth. It’s a minor complaint that’s rendered nearly moot when you take down a dragon as the Vampire Lord.

Now, I know what you’re asking: “What do you get for siding with the Dawnguard?” Well, you get a… crossbow. Yup, that’s right. Sadly, even playing as a nearly max-level archer, the crossbow (or its enhanced version) was frankly not that good. This is especially disappointing considering that with the DLC you can craft Dragonbone weapons, and the Dragonbone Bow blows the crossbows completely out of the water. I can imagine that a lower level archer joining up with the Dawnguard could get some good use out of the crossbow, but warrior or mage characters won’t get a whole lot for siding with them.

One thing you do have the potential to get for siding with the Dawnguard is access to the new perk tree for Werewolves. The Vampire Lord has its own perk tree as well, and both trees gain progression from “feeding” on your foes. Sadly, the Dawnguard doesn’t give you the chance to become a Werewolf, so you’ll have to do the Companions questline from the main game to do so if you haven’t already, and if you have already cured yourself of lycanthropy, you can ask Aela to change you back.

Besides the new perk trees and the story, Dawnguard adds a few new abilities and trinkets for your Dovahkiin to play around with. There are a couple of new shouts to learn, a spell to summon an undead horse, an NPC in Riften to makeover your appearance, the ability to craft any type of arrows as well as the aforementioned Dragonbone weapons (and crossbows,) and even some new spells to use. You’ll also pick up plenty of vampiric and Dawnguard armor from your foes as you progress, and the end-game and side quest items (which I won’t spoil) are extremely awesome.

While a majority of the story in Dawnguard takes you around Skyrim itself and into familiar looking areas, the few new areas that are introduced are fantastic and plenty of fun to explore around. If you’re an Elder Scrolls lore fan, there are also some surprises waiting for you in the storyline, though those particular surprises were a little abrupt with how they were introduced. You’ll also find yourself facing familiar enemies, but there are some new faces among their ranks as well. Vampires side themselves with Death Hounds and Gargoyles while the Dawnguard has a host of Armored Frost Trolls to fight at their side. Two new dragons have been added to the game to challenge players at the higher levels, and new creatures and variants on existing creatures will appear as you progress through the story.

Even with the minor inconvenience of the dozen or so hard lockups I encountered when playing through the DLC, I find it hard to not recommend this add-on to anyone who’s a fan of Skyrim and is looking for more. I spent somewhere around 15 hours playing through Dawnguard, and I’ll likely spend another couple of hours working on getting the achievement for maxing out the Vampire Lord perk tree.

An interesting, well-told story that you can experience from either side.
Plenty of new weapons, armor, and abilities to play with.
10-20 Hours of gameplay, with quests rivaling the best of the vanilla game.
Not much for a high-level character to gain.
A majority of the areas you visit will feel very familiar for Skyrim veterans.

If you’re invested in Skyrim, this is definitely a piece of DLC you’re going to want to get. That said, if you still have a laundry list of things to do in the main game, you’re not going to miss out on too much if you decide to wait for a sale or just pass on Dawnguard all together. Personally, I just wish it had bumped up the skill cap by 10 or 20 points and added some new perks to the main trees to have something to work towards, but that’s a minor complaint since it took me hundreds of hours to nearly max out my character. Maybe in one of the later DLC packs, my wish will be granted.

As an expansion, Dawnguard is less meaty than say The Shivering Isles for Oblivion, but is far more substantial than The Knights of the Nine or any of the add-ons that were released for Fallout 3. That makes sense considering the price point is right in between those types of DLC. Here’s just hoping that the future releases may bring us a whole new world to explore like The Shivering Isles did.