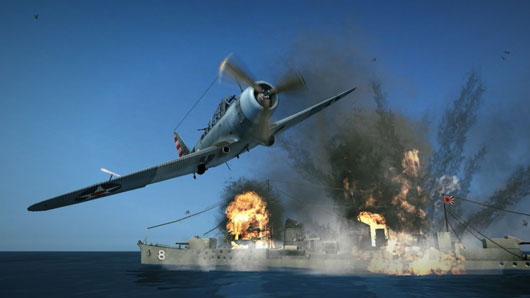 Damage Inc Pacific Squadron World War II is a long title that tells you varying amounts about it’s content. Just to clarify, it is an arcade orientated flight simulation in a World War II setting, with missions based around historically accurate recreations of events from the American viewpoint of the Pacific rim campaign. These events inevitably pick up the story from the point America was dragged into the war, after the fateful day of the attack on Pearl Harbor. While the opening cinematic does set the scene from the American viewpoint, it does at least attempt to show it’s unbiased nature by presenting some facts about what influenced the Japanese into taking this drastic action. After America cuts off Japan’s oil supply, the American narrator tells us that the Japanese retaliate with what any country would have likely done given their situation, in making plans to go to all out war. 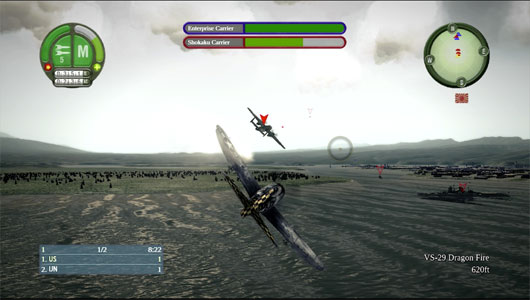 The training level I played through, starts off in Pearl Harbor in a relatively peaceful and otherwise serene setting, especially given the impending horrors to come. Taking off from the small island based runway is a simple matter of applying some throttle and then gently lifting the nose of the plane when at speed. From here you are soon flying through the blue skies of the tropical setting and tasked with some fairly simple maneuvers to get used to the feel of the fighter plane selected. These include flying over various landmarks, doing a flyby on the radio tower and then a tighter, lower course through a causeway of closely moored ships. It soon ramps up the difficulty by then asking you to use your front mounted machine guns to destroy some ground and air targets in the forms of abandoned jeeps and floating weather balloons. It is at this point that I take my first nosedive into the ground.

That is not to say that the game controls badly, just that I personally did not control it that well. At this stage I should mention that I am previewing the game using the Pacific AV8R FlightStick, this comes bundled with the Collector’s Edition version of the game. While it is perfectly possible to use a standard controller throughout, the flightstick does give a degree more control and accuracy, but does come with a learning curve for anyone like me who is implicitly more comfortable with a control pad. The AV8R does give you the satisfaction of replacing the A button with a trigger to fire your machine guns, with bomb or missile controls and target selection controlled via the remaining face buttons. It also neatly gives you control of the yaw of the plane by rotating the stick, a function that I have never personally seen on a flight stick before. I also like the front mounted lever that controls your throttle for that extra air of authenticity. 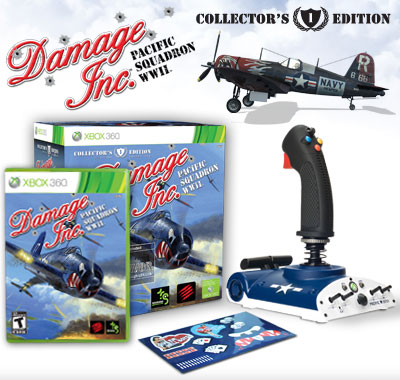 It is tricky to get use to the small movements you need to make to ensure the plane does not veer around the skies in jerking, jolting movements, but I got more comfortable with this as time went on throughout the hour or more I was playing and am pleased to say that I eventually managed to safely land my plane after completing all of the training level objectives. As I said, in the training level my first crash only occurred went first attempting to fly and shoot at the same time, but the controls do give you some additional help in this regard. With the AV8R these controls are mapped to the rear switches which allow for camera control and use of “War Speed” — essentially just a boost to make longer journeys less dull, but can also be helpful in more quickly making a pass for another attack run — but it is the last switch that gives the most assistance when lining up shots as this gives you control of “Reflex Mode” which is a limitless Bullet-time-like slo-mo effect, giving you more time with your target in your crosshairs.

You will have to make full use of all these assists, as the gameplay is certainly not easy. The Reflex Mode is definitely most welcome when in dogfights and shooting at ground targets, but can also be used in the game’s other mission types too. The single player campaign is said to last for more than twelve hours set over twenty missions and features thirty-two upgradeable aircraft. There are a variety of mission types including two differing bombing mission variations, using Dive and Torpedo bombers. I tried my hand at a Dive Bombing mission where you were tasked with swooping down upon some aircraft carriers, preferably before they allow their attack fighters to get up in the air. Again this is not an easy task to perform, but you are given some additional help with some visual indicators in the middle of the screen that display the optimum attack speed and angle of approach, as well as a ‘drop zone’ indicating targeting reticule. I played in the Arcade setting, but there is also a Simulation mode available that is supposed to be the optimal way to play with the AV8R FlightStick. This also allows you to play in the cockpit view and the smaller analog stick on the top of the AV8R FlightStick  then gives you control of your head movements. 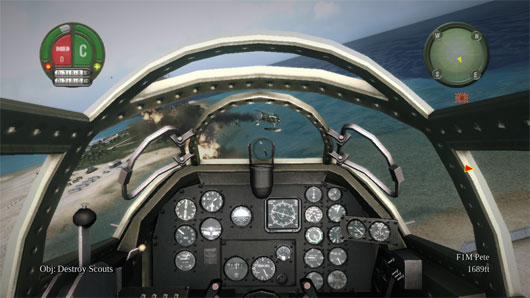 The code I got to play was not final and as such did not contain any of the multiplayer elements, but the final version will contain online modes for between two to eight people with single and team based Dogfighting deathmatches, survival modes and a mode where you are charged with attacking the other team’s aircraft carrier. Most interestingly of all perhaps, is the opportunity to take part in a co-op campaign mode with up to four players. I would like to see a few things tightened up in time for launch, while the planes are quite well detailed, it is hardly the most graphically impressive game and the clouds particularly could do with some graphical retouching. That said the details on the ground and water do already look a lot better than some recent flying games such as Tom Clancy’s HAWX. It may be too late to do anything about the decidedly ropey voice acting, but that may prove to provide more amusement than just an average job of this would have done anyway. You can decide for yourself when Damage Inc goes chocs away and launches into your airspace worldwide on the 28th August.