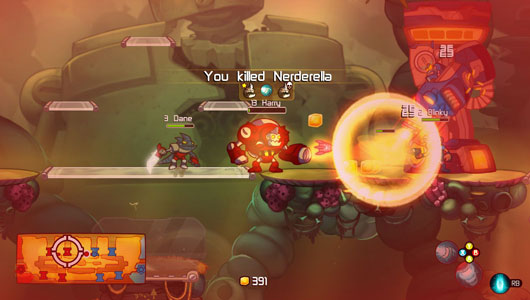 When booting up Awesomenauts, there’s a brilliant Saturday morning cartoon feel to the proceedings. Squidgy sci-fi scoring not out of place in The Transformers: The Movie plays a backdrop to a dramatic voiceover: the year is 3587, huge star-hopping armies are in endless conflict over a rare element called Solar, and the only force able to end the stalemate between the warring tribes is … the Awesomenauts! Cue the silhouette of six zany, ice-cold creatures looking cool for the camera as the high-pitched theme song singers wail “Awesome!” over the montage. And then everything explodes.

This perfectly pitched intro betrays Awesomenauts surprising depth. Despite the animated cartoon stylings and a tongue firmly wedged in cheek, the side-scrolling shooting and slashing has more in common with DOTA and League of Legends than it does Rayman. Two teams of three are pitched against each other with AI droids for company and backup, the ultimate aim being to best the other team’s arsenal of turret guns and identically equipped droids and blow up their base — a drill mining for precious Solar.

Each of the six Awesomenauts has an exaggerated personality, but each is a distinct class with strengths and weaknesses to consider. Whether playing as Clunk, the tank-like class with “batteries included” or the French lizard Leon, who specialises in cloaking and dealing extra damage by literally stabbing enemies in the back, each character is unique and offers up gameplay gently derived from a general template of finding things to hit, and then hitting them. Loadout selection at the beginning of each match is a brief two minute affair, encouraging action over hardcore strategy, but leaving room for some quick thinking before the game gets underway. The strategy continues inside the game itself, as Solar dropped by fallen enemies is then spent on the pre-planned loadout in any order the player desires. 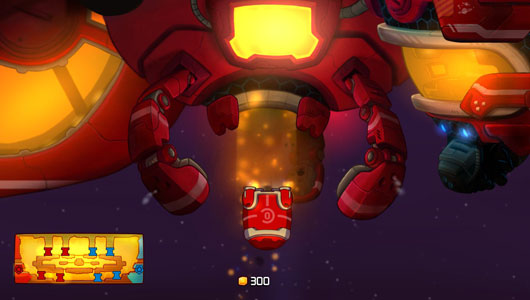 Each spawn in Awesomenauts launches player characters from an overhead spaceship - the descent allows players to collect extra Solar.

The AI droids, if left to their own devices, will simply meet one another in the middle of the game’s three maps and remain in stalemate, meaning that player intervention is the only way of driving them forward. Once they approach a more lethal turret, they will engage shields to improve their longevity, allowing smart-minded players to hang behind them and deliver a double-whammy of firepower. The design is a carefully considered one which leaves responsibility for the outcome of a match entirely in the hands of the players, and their choices of class, rather than the actions of a wayward computer-controlled robot.

As a solo experience, Awesomenauts is boring. AI Awesomenauts, who also fill in empty player slots online, are too competitive and lightning quick when it comes to moving about the stage and aiming vertically as they move. Playing against them initially at least is a frustrating experience, and the game truly comes into its own online. Split-screen gameplay for up to three players is a welcome feature, but the frame-rate drops dramatically and the limited screen size only serves to highlight how difficult it can be to make out individual characters when the Awesomenaut equivalent of a dogpile gets underway — which happens more often than may be expected.

The misgivings are outweighed by the excellent design choices and merry visuals, complemented by pitch-perfect sound effects, voice acting and deliberately lightweight backstory, which takes a backseat to the blasting and bombing. The surprising depth offered up by a three-slot loadout and a 2D side-scroller will be intimidating for some and potentially off-putting. But Awesomenauts has the charm and accessibility to do more than give existing MOBA (multiplayer online battle arena) players a new prowling ground. It has the potential to offer up new converts for the war effort.