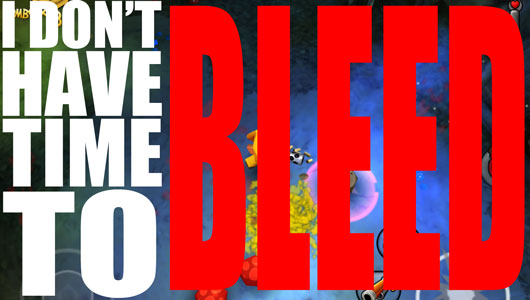 Scene: Technicolour graveyard. Actors: a zombie, a bloated clown, and a man with a machine gun. The man opens fire as they advance, and one scores a hit. “I DON’T HAVE TIME TO BLEED,” the gun-toting man growls, sounding like a hungover Duke Nukem on his day off. With a cold. The monsters fall, and the man trots onwards, bleating “IT’S TIME TO GET YA'” at the top of his rumbling voice. He says these things over and over again for five hours.

That is Lock ‘n’ Load in a nutshell. An iOS twin-stick shooter from Polish development studio GameLab, it starts out as something initially entertaining, if only because it seems like a joke. The character is laughably bad, his catchphrases nonsensical, the subtitles poorly localised and the voice acting atrocious; and this is all very funny until it becomes consistent and haunts the overall experience an irreparable amount. 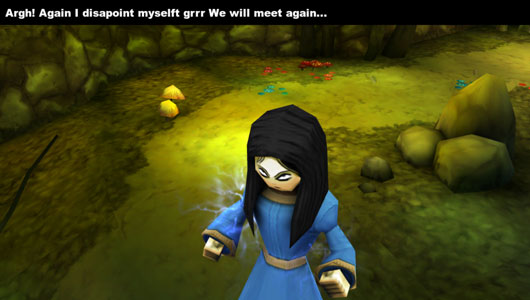 Argh! Again I disapoint myselft grrr We will meet again...

The overall experience, regardless of awful presentation, isn’t exactly pleasant. GameLab’s design document is apparently made up of the words “corridor” and “kill room”, as these two areas are linked together repeatedly over the course of the game’s 16 levels, with zero imagination in between. When there is zero relief from this, save for the occasional shooting gallery – introduced, with confusing grace, by the game’s villain – the experience is tedious.

Shooting at things isn’t much better. Controls are so imprecise that it’s not worth sticking with the two virtual joysticks, the better option being to use an auto-aiming fire button in place of the right-hand stick – at which point the game becomes a monotonous rat-tat-tat of endless machine gun fire. There are alternative weapons available as you progress, provided you collect enough in-game cash – and this is where Lock ‘n’ Load really offends.

Like many titles on offer from parent company EA, publisher Chillingo has seen fit to place everything just out of reach of users unless they splash the cash on some in-app purchases. The average player will collect enough money to buy a health potion each level, which they will doubtlessly use because the auto-aiming is so terrible. But dying after using it, and before reaching a checkpoint, will not bring it back, as the checkpointing system forgets your previous ammo and health potion count, leaving you with what you had when you died. Thus, the only way to keep some money back for weapon upgrades and unlocks is to die repeatedly instead of keeping health potions, effectively cheating the game to perform better. That shouldn’t be necessary. 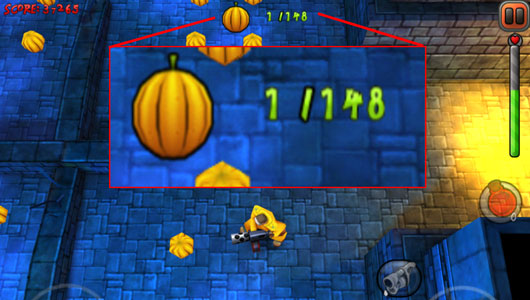 Lock 'n' Load's game design is at its richest when the kill rooms stop and you're asked to collect 148 pumpkins instead, for no reason.

The in-app purchase woes continue when it comes to unlocks and a shocking ending cut-scene. Despite having purchased the game already (69p on the App Store), bonus stages such as extra challenges aren’t actually unlocked by collecting the pickups that litter the game’s levels. Instead, the option to buy the bonus stages is unlocked, and the prices are always just out-of-reach to the penny-penching player.

And despite being a brand new title, Lock ‘n’ Load‘s story ends with a cutscene encouraging you to buy the included expansion pack for £2.99 worth of in-game currency, an amount impossible to attain simply by playing the game. The £10.49 “Premium” package, which offers up infinite in-game money and access to all expansions in future, is a slap in the face and a sign of bad publisher influence – it’s no Jetpack Joyride, a title as fun for free as it is once you invest a penny or two. Forget pay-to-supplement: this is purely pay-to-win, and the game’s penultimate stage almost demands a minimum IAP investment in order to progress.

Looks alright
It doesn’t crash when you turn it on (most of the time)
Distinct lack of a personality and monotonous gameplay
“I DON’T HAVE TIME TO BLEED”, fifty times a level
Appalling emphasis on in-app purchases required to succeed

There isn’t much that can be done to save a title like this. Monotonous gameplay, poor presentation and a complete lack of personality do nothing to help Lock ‘n’ Load, and a horrendous emphasis on in-app purchases for a game already purchased is the final nail in the coffin. Do yourself a favour and grab Beat Hazard Ultra instead.