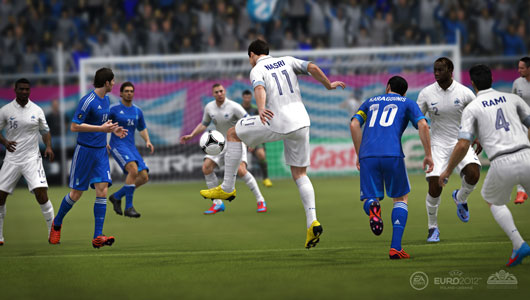 Every two years, EA gets a new pop at producing an extra football game alongside annual release FIFA, heralded by the return of the FIFA World Cup and UEFA Euro championships. Each title is tied into each event, with all involved teams and the like, and produced as a standalone game on occasionally tweaked game engines, which sometimes addresses any flaws of the last full-blown FIFA entry — or screws it up more. This year, the UEFA Euro 2012 tie-in game will be released in the constraints of a new business model: a digital download add-on for FIFA 12 for around £15.99 rather than as a disc-based release.

For less than half the price of a standard game release, the add-on will feature updated versions of all 53 EUFA international teams and the eight stadiums in host countries Poland and Ukraine. Dynamic challenges based on real events in the Euro championship will be downloaded to the game as they are made available, and a new mode called “Expedition” will allow players to craft their own international team and take it all the way to European glory, with a self-nurtured Virtual Pro player from FIFA 12 as captain.

The digital-only release of the Euro 2012 tie-in signifies a definitive shift towards digital-only releases for a number of publishers. Compared to Mass Effect 3‘s £57.99 price tag on the PlayStation Network, it’s a mild surprise to see what would normally be a full-blown game be released at a comparatively cheap price, but a decent gesture nevertheless, which shows understanding of how digital pricing should operate. Since the game will be running on the most recent FIFA engine, as many previous Euro/World Cup games have in the past, EA saves a bundle on manuals, CDs and game boxes and seem genuinely keen to pass these savings on to the end user. It can only be a good sign.

Of course, ownership of this add-on requires that a user also owns a copy of FIFA 12. While something of an Achilles Heel at first glance, it’s worth remembering the original title has been out since last year, and its price has been drastically cut since.  Amazon currently offers it up on both PS3 and 360 for £25.00, meaning that the game plus Euro expansion costs around the same price you’d have paid for a standalone game, give or take a few quid. The install base of FIFA 12 is also massive, with 3.2 million copies being sold in the first week alone. The number of people who invest in the add-on will doubtless be huge, given the game’s large following and the performances of standalone Euro games in the past.

EA’s willingness to release a previously complete release as a digital add-on to a game, which once served as a backbone to that release, shows a good understanding of the shift toward digital — and, it must be said, a neverending wish to combat pre-owned sales by making them impossible. That it directly avoid retailers in favour of direct profitability could be seen as a declaration of how the market may change; the low price point would account for no longer having to satisfy stores by increasing the price. GAME’s downfall may well have encouraged EA to rethink their digital strategy (having realised that specialist retail is no longer something to be feared). The repercussions and thoughts that it conjures up are numerous, but one conclusion is clear: the release of FIFA Euro 2012 marks the beginning of a decent age of digital by a large-scale publisher, in which a price finally accounts for the lack of a manual, box or physical disc.