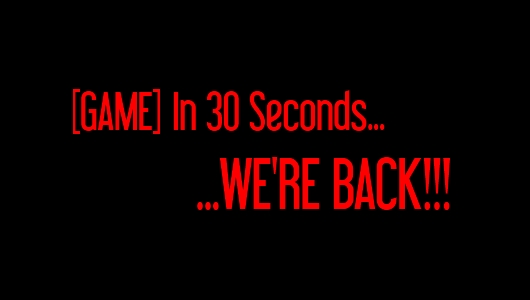 A long time ago, and by “long” I mean a couple of years back, I had a vision. A vision of 30-second videos in which I talk about a game without describing anything particularly relevant about it. Nobody, not even I, ever knew what the end result would be per video, but it tended toward amusing and that was good enough for the hundreds — sometimes thousands — of viewers who tuned in whenever a new episode was posted.

Those videos still exist somewhere in the aether.  Still, people lamented the lack of new episodes being produced (seriously, I got emails. I never get emails from users, but I got at least two for this!).

One of our mighty overlords and Master of PR Representation and Being Cockney, Tim, has been bugging me since the inception of Big Red Barrel to revive the feature. Well, Tim, here you go.

In all seriousness though, [GAME] In 30 Seconds has always remained close to my heart, and I never stopped coming up with ridiculous ideas for it with every game I have played over the last couple of years. And now it’s back. Back For Good, as Barlow would put it.

So please join with me in welcoming back the feature that will never, ever last more than 30 seconds because that would totally invalidate the conceit of the whole feature: [GAME] In 30 Seconds.

…Or GITS as the staff tend to refer to it. If you’re British, that’s a funny word.