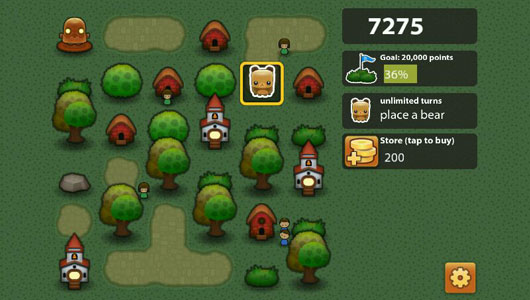 It’s extremely busy being An Internet Superstar. Allow me to elaborate: in between writing things like this, working the day job and keeping busy with other projects, I don’t actually get much time for gaming unless it’s for review or for jumping into the odd game of Battlefield 3. At the moment, the majority of my gaming is done on my phone in bite-size chunks on my commutes to and from the beautiful, bustling city of Glasgow, Scotland. This means I dip into some of the usual things: the Kairosoft Stories, the one about the moody avians, the occasional session of Fruit Ninja where I loop my finger round and round and pretend that I have some kind of elegance to me.

And then along came Triple Town. Undoubtly gifted a massive amount of publicity by Yeti Town‘s blatant plagiarism, the game itself will not become a victim of this surge in popularity. This is because it is very, very good.

Produced by Spry Fox, an independent developer comprised of just two people, Triple Town is essentially an evolution of the typical colour-matching game. It adopts the scoring mechanism of games like Puzzle Bobble and Bejeweled, and then turns the three-in-a-row concept on its head by turning matched triads into a singular, more advanced game piece which can score higher points rather than making them simply disappear.

Let me give you an example: grass. Grass is Triple Town‘s base piece and, when lined up in a row or formed as an L shape, turns into a bush, placed at the position of the piece that finalised the match. Three bushes lined up in the same manner turn into a tree; three trees turn into a hut; three huts turn into a house, and so on. Rather like Tetris, each piece is chosen at random and given to you to place. It’s up to you how you place it, making each game unique.

Things are made more complex by the presence of bears who, just like other pieces in the game, are placed by you on any blank space on the 6×6 game grid. Bears are simply annoyances who move with each piece you place, but stopping them from moving is fatal and turns them into a gravestone. Three grave stones means a church and three churches equals a bigger, points-loaded cathedral.

The result of a few minutes on Triple Town turns your numerical score into a visual plateau of success or failure, depending on how well you manage to line things up and deal with bears. Bad planning can result in a scattering of random blocks and a messy, low-scoring finish, whilst using your head and carefully locking bears in can result in a town up to its figurative eyeballs in large houses. It’s satisfying to watch the process unfold and amazing fun to work towards the game’s next medal.

Where Triple Town also succeeds is in siphoning funds from your wallet. The game, which is free to download and play from the off, comes with a finite number of turns which slowly replenish over time. Turns can be bought using in-game coins – which can also be used to instantly and strategically use a piece of your choice – or can be made infinite with a $3.99 one-time transaction. Real money can also be used to buy coins ranging from $0.99 for 2,000 through to $4.99 for 50,000. For some perspective: trees, the highest-ranking building blocks available save for special items, cost 400 coins to receive on demand, rather than waiting for it to appear in your hand.

I have been vocal in the past in Other Writings about free-to-play games that give you the illusion of control before asking you to hand over vast sums of money. Here’s a terrible example: Tiny Tower, a tower-building game in which no actual gameplay is had – instead, it becomes a daily routine of tapping each floor of your skyscraper to replenish stock and waiting for it to finish before doing so again. And again. And again. The process, of course, can be sped up by investing some Actual Currency in the game. But to do so in Tiny Tower is like paying a restaurant so you can do their dishes.

The team at Spry Fox understand what it means to get a solution to a difficult problem, and the puzzles you will inadvertently impose on yourself in Triple Town will sometimes be resolved by the introduction of a lucky piece, and sometimes they will result in failure. I’ve had times where I have been doing particularly well and have chucked a guilt-free $0.99 the way of the development twosome because, shucks, I like their game. Some people will be opposed, which is fine – in-game coins can be earned simply by completing towns, regardless of how good the score is, and they can buy turns that way without spending a single Real Penny.

But as for me? I am a slave to Triple Town, a game of magnificent design, incredible time-passing qualities and money-spending opportunities, which, occasionally, are genuinely appealing whether looking to rescue a particular game or just support a couple of guys who have produced an excellent little mobile title.

Honestly? A little part of me feels sorry for them after the Yeti Town fiasco. They deserve some damn good lawyers, and I don’t mind chipping in for that if it means protecting Real, Fun Innovation.