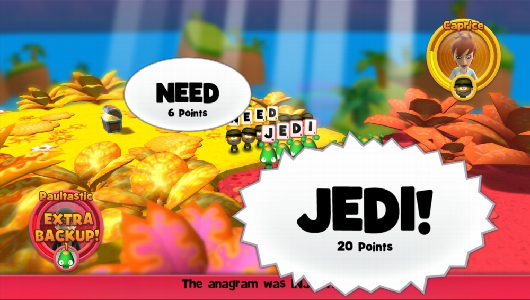 If you already know about Quarrel, it’s probably because you’ve already played it on your iOS device. But this is the original version of the game… that came out after the iOS version and… OK, it gets a little complicated there. So let’s go through what you need to know about this game.

Quarrel is a wonderful mix of Risk and Scrabble, with two to four players fighting for control of regions of a map until one player controls the entire board. All very Risk-esque so far. Well, this is where the Scrabble portion of the game comes in. To take a region, you and your opponent must create the highest possible scoring word from the same eight letter anagram, the person with the highest score wins the Quarrel. But this is more than just a battle of word smiths, there’s a strategy involved, as you can only make words with as many letters as you have charming troops to take into a Quarrel. The end result blends in strategic planning to keep your troop numbers high and fast lyrical thinking to make the highest scoring word possible with the number of letters you have.

There’s a tonne of different game modes to test your vocabulary in, from simple quick matches to map Domination and Challenge modes. Each one pitting you against a variety of digital opponent styles to keep you on your toes, and with different requirements to move onto the next round. It’s all scored on your word IQ as well, not only calculated on whether you can unscramble the anagrams, but also on how often you can earn the maximum amount of points based on the number of letters to have to work with. New to the XBLA version though, two to four person online multiplayer, along with public and friends leaderboards to boot. However, these differences from the mobile platform are all pretty standard on the Xbox Live Arcade scene, so you’d be forgiven for choosing not to continue reading if you’ve read reviews else where. 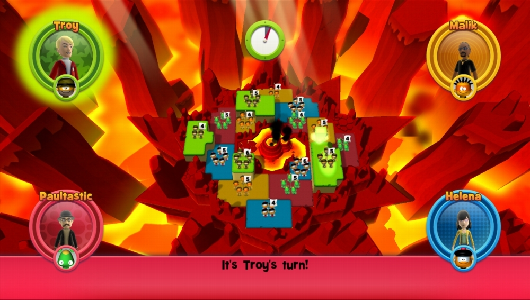 The main fun in this game? Winning a Quarrel with the word: GIMPS

If you’ve continued to read on, it’s all good news from here on. The game looks good, and it’s the little things such as the tones when cycling through menu options that make Quarrel a delight to play. The overall layout of the menus is clean and intuitive, and that trait carries through into the gameplay itself. You’d have a hard time not understanding what’s taking place during play, so the only hard part is coming up with those high-scoring words. This is another slight drawback. In most of the game modes, you’re given a fairly short time limit to make your letters worth something. It’s certainly enough time when you can easily spot a word, but it really alienates those who aren’t quick-witted with vocabulary.

Colourful, intuitive layout
Good set of singleplayer features
A good test of your vocabulary
Not much new in this version
The sounds soon get irritating

So, while there’s plenty of different game modes to sharpen your skills, Quarrel is always going to favour the sharper pencils in the pot. And you know what? That definitely wasn’t myself, yet I still enjoyed the game enough to recommend that you check it out — if you haven’t already. The XBLA version is available now for the measly price of 400 MSP.

Review code provided by the Publisher