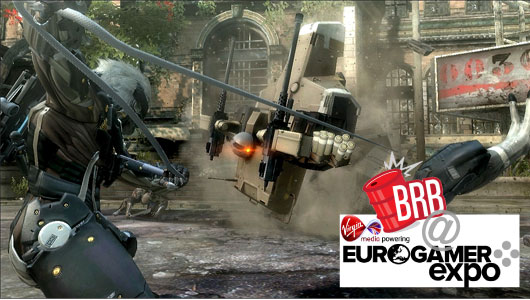 If there’s one thing that needs making clear before playing Rising, it’s this: it’s not a Solid title, but it is a solid separate entity. We feared that it would be the hack-and-slash equivalent of The Bourne Legacy: functional, a bit terrible, with existing names thrown in to bolster the appeal. The great news? We were wrong – so very wrong.

Rising is beyond functional: it is stellar. Playing as the re-armed, guyliner-equipped Raiden is an absolute joy, whether hacking away at chunky clumps of living meat or precision-cutting through giant robotic legs, watching the owner keel over on the stumps and explode.

The 15-minute demo from the Eurogamer show floor takes Raiden through a typical war-torn city, facing off against humans and mechs alike. Combat is open-ended, never encouraging particular moves over others – thus far, at least – and so it’s up to you whether to play it as a straight combat title or to indulge in slow-motion, right-stick-controlled precision joy. It’s a guilty pleasure to flick the stick back and forth, reducing enemies to salami before before reaching in, ripping out their pulsating blue spines and crushing them in an angry fist. Not sure a chiropractor can fix that.

Defensively, Raiden lacks a typical block button a la Bayonetta, instead relying exclusively on parrying hits by moving towards an advancing enemy and attacking them right back. It takes a lot of practice to perfect this, and the demo doesn’t quite give you enough situations to make the best of the mechanic. A rock-solid end boss takes infinite pleasure in dispelling your parries and introducing a rapid chainsaw to your chest, which errs towards controller-tossing levels of frustration, even on normal difficulty. 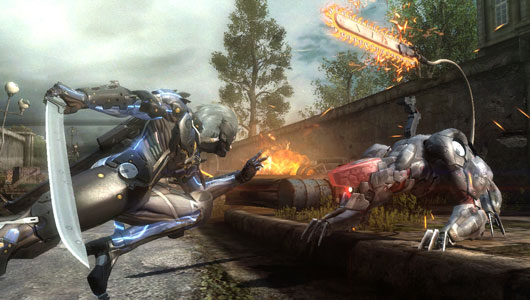 It’s this boss fight which raises questions about what exactly Rising‘s intended pace is supposed to be. Mechanical enemies require a touch of wearing down before their legs can be run through properly, but by and large the pace is rapid – y’know, characteristically long cut-scenes aside. However, when squaring off against the end-level quadruped, the speed at which everything happens slows down and the fight becomes a test of patience.

You’re paired off against an enemy which takes its time attacking you, and will unleash a lot of damage just as you decide to make a move yourself. Perhaps the expo environment encouraged too much hacky-hacky behaviour in an attempt to just get the fight over and done with, but those of a similarly speedy disposition might find the leaps and bounds in pace uncomfortable, if not irritating.

Pacing issues aside, the combat is superb, the interface Metal Gear-esque without just stealing old assets and the industrial visual theme comfortable whilst moving the setting to a new, brighter location. It’s clear from watching Rising in motion that whilst Platinum have had an order to fulfil Kojima has, in his executive producer role, given them room to breathe, allowing them to fill the scene with their own visual quirks. As an action game it is excellent: but only time, and a full playthrough, will determine if it’s still got Metal Gear and the right intentions at heart.