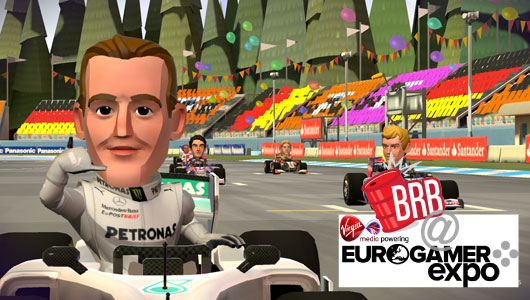 In case it hasn’t been made clear, F1 Race Stars is not F1 2012. It does everything it can to eschew realism: the bobbleheaded drivers, the fantastical track design, the fact that everybody is best mates and, unlike actual F1, Pastor Maldonado isn’t the only person attacking others. Despite the unveiling of F1 Race Stars sending controversial ripples throughout Codemasters’ existing fan-base, the biggest surprise of Race Stars isn’t that it exists. We may well have here a karting game that out-Marios Mario Kart because it chooses to lead, rather than follow.

Rather than follow in Mario Kart‘s shadow – in the vein of Crash Team Racing, Modnation Racers and, more recently, LittleBigPlanet Karting – Race Stars carves out its own niche in the kart-racing sub-genre. The secret to its success is that it remains faithful to the concept of Formula One racing whilst injecting the landscape with a hefty dose of colour and blessing the drivers with heads massive enough to contain even Lewis Hamilton’s ego.

The handling is sim-inspired, rather than drift-heavy: powersliding is out altogether, erasing snaking and similar problems – not to mention keeping the driving as authentic as it can be when driving something that looks like a Micro Machine. Instead, the comfortably heavy cars corner best with a tap of the brakes beforehand, rooting the handling somewhere just above arcade levels of perkiness. 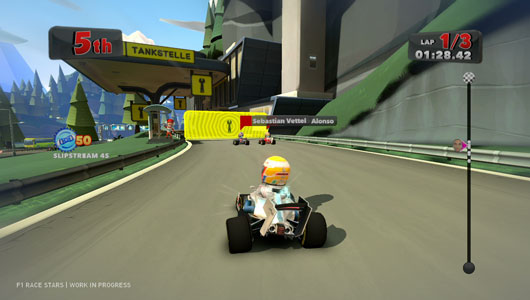 The impressive and impeccable adherence to the spirit of F1 continues in every corner of the game’s design. Blue turbo strips serve as passing points, charging up the KERS battery inside your car by pumping the accelerator; cars damaged by power-ups can take advantage of pit lanes which line the track in several locations each lap. There’s even an adorable safety car – genuinely the only word for it – available as a power-up, which takes off ahead of you to slow up the rest of the pack. Everything has been considered from a loosely authentic point of view, charming even the steeliest F1 fans with its undeniable cuteness and dedication to its own cause.

The German-inspired track on the Eurogamer Expo pods combined elements of the Nurburgring circuit whilst winding through deep forests, cottage towns and, towards the close of the lap, a stretch of autobahn motorway. There’s even a majestic, jump-filled castle resembling Hohenzollern; hidden within is a shortcut unlocked with a key picked up earlier in the lap. To keep the race balanced, those towards the back end of the pack will be the only racers able to pick it up, but be wary of the odd bit of rubberbanding.

It all comes together incredibly well; better than it may have been expected to, for a game that is, for Codemasters, the first pop at anything like this. F1 Race Stars is, at its heart, unapologetic in its existence. You didn’t ask for it, and you probably sneered at it, yet it’s willing to take this all on the chin provided you give it a spin (with up to three friends at once – split-screen is back). It’s okay to be impressed with it afterwards. We won’t tell.