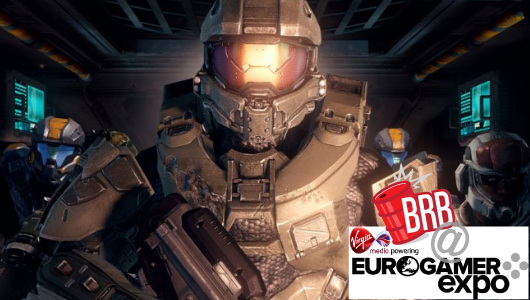 Halo 4 was my unofficial opening to this year’s Eurogamer Expo and, as a massive fan of the franchise, pretty much my first stop after getting through the doors. And, if that wasn’t enough Halo goodness, my time with the game was shortly followed by the developer session from Frank O’Connor. Despite being provided with a new video every other week, it was fantastic to finally get hands on with the game and see the direction 343 Industries were taking with the upcoming Reclaimer trilogy.

My first match was a straight up free-for-all on a rather vehicle heavy map, Exile. Before starting the match there was a brief chance to play around with some of Halo 4‘s new customisation options, from the wealth of armor permutations to far more in-depth loadouts that let you choose a chosen primary and secondary weapon, as well as an armor ability.

The first impression I had was that this was definitely a Halo game: veterans of the series aren’t going to be stumped by the changes that have been made. Exile is very reminiscent of the classic Battle Creek map in terms of its aesthetics, but it provides a large, circular path around the edge for vehicles, while there are tight corridors and a central area for close combat. Jumping straight into a Ghost, I noticed just how much more substantial the engines sounded, a trait that carried on to the weapons which felt very hefty against enemy Spartan IVs. Still exposed, and taking fire, I abandoned the Ghost in favour of a Banshee, getting a few kills before meeting my end at the hands of a  shot from a Scorpion tank. As I’d earned quite a few points in that run, I had a personal ordnance supply waiting to be dropped near my location. As the pod dropped, however, I was engaged in a firefight, using the assault rifle for the first time. 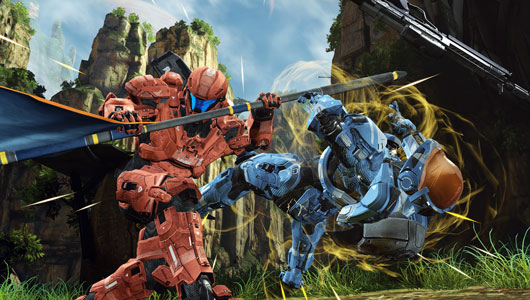 This is when the dramatic changes in audio became apparent. In previous titles, the assault rifle was always an adequate mid-range weapon, but in Halo 4 it felt and sounded like a a real powerhouse, despite being a starting weapon.  I finished the session at the top of the leaderboard, after some last minute dominating in the seat of the Scorpion tank.

My second match was in the recently announced Flood gametype on the Complex map, a slightly altered version of the Infection mode from previous games. The Flood have taken over a few Spartan IVs and are hell-bent on spreading to the remaining Spartans. Armed with a shotgun and pistol on all loadouts for this gametype, you’re going to rely on your armor ability to give you an edge. I picked the the Hardlight Shield, which when used correctly, will save your life countless times in this type of mode, as you can easily block incoming attacks from the front in a split second, and leave the Flood vulnerable to a round to the head. Once the Flood have taken over fellow Spartans, they can also use a selection of abilities, including the Thruster Pack, which can propel you into the range of an enemy before they’ve got a chance to react.

Halo 4’s multiplayer impressed me more than I thought possible. I knew this would be a true Halo game, but it looks and plays fantastically well, and really feels like a brand new game whilst maintaining an air of familiarity at the same time.

If you want to check out Frank O’Connor’s developer session, the event was recorded by Eurogamer for your viewing pleasure. Frank took on a section from the third mission of the campaign, where the Covenant and Prometheans wage battle on each other. Spoilers ahead!