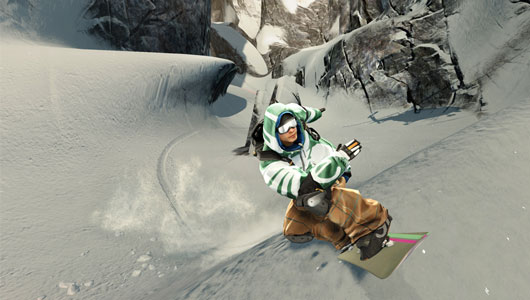 There’s a moment late on in SSX, during the game’s World Tour mode, at which your character is preparing to snowboard through some cracks in Mount Kilimanjaro. The helicopter pilot preparing to drop you into the ether shouts something about how this is something nobody has ever done, and yet when you take the plunge into the mountain there’s an array of almost comically huge rails ready for grinding down.

It’s an oddly jarring moment which sums up exactly what is right and wrong with EA’s snowboarding franchise reboot – the team have been so desperate to revitalise something that was already great that they’ve sort of created a mishmashed Frankenstein, equal parts ugly and beautiful. It’s a game of two halves, one of which sucks so much that it’s only because the other half is so incredible that you’re able to forget how bad it really is.

In order to bring SSX into the year 201x, EA Canada have seen fit to rejig the controls for a modern, trigger-happy joypad – moves are performed with a combination of face button presses, or Skate-style flicks of the right analog stick. Extra gadgets, gimmicks and gizmos (more on them in a bit) are activated with a variety of other buttons now freed up as a result. SSX veterans can opt to use the traditional, shoulder-button-favouring controls if they wish, but the game has changed so much that it’s not worth the bother, especially since none of the in-game tooltips update to accommodate your selection of control layout.

As it is, pulling off a dazzling array of tricks is as easy as launching yourself in the air – highlighted ramps dotted across the various ‘drops’, or circuits, are especially good at propelling you upwards – and squeezing a button or two, or flicking the stick, and accompanying it with some slick spins and fast-flowing flips. It all looks super impressive, and combos can be strung together with new ground tricks, a feature akin to the introduction of the manual revert in Tony Hawk’s Pro Skater 3. With some practice, entire runs can be nailed in a single combo, with successful strings of tricks eventually activating ‘Tricky’ and ‘Super Tricky’ moves which score even bigger points. Without a doubt it’s accessible, encouraging of freeform experimentation and ultimately very fun. Cut it any way you like, but SSX‘s decade-old style still has it.

Gameplay across SSX‘s three primary modes unfolds across one of three simple templates: racing against other ‘boarders, pulling off massive combos to outscore your rivals, and facing off in a survival run against the environment around you in what the game calls Deadly Descents. These Descents, originally a subtitle for the game when originally unveiled, mark a “darker” tone for the game in that it’s possible for your rider to be bested by the elements and out of the running until you hit the restart button – menus even show a ‘survival’ indicator telling you how likely you are to even finish an event.

This ‘darker’ tone is, at best, a complete hindrance in the way of what makes SSX an absolute joy to play. The World Tour mode the Descents call home is a mess of two-dimensional characterisation, tedious motion comics and a plot that involves ‘Team SSX’ facing off against some former teammate gone rogue, or something. It’s all so mind-numbingly boring that you wonder why they bothered tacking it onto the equally flimsy gameplay of the World Tour mode that follows. 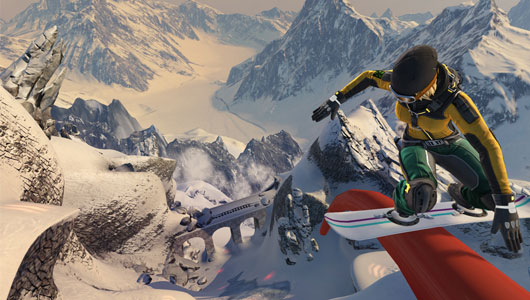 The World Tour is split up into nine different mountains, and introduces each utterly plain character and their special equipment – wingsuits, heat-generating solar panels, oxygen masks, flashlights. The whole mode is a gentle tutorial on how to use each one, but once you’re done you’ll wonder why you were taught to use something you never wanted in the first place. The difficulty spikes and the gimmickry of the various equipment – clicking the right stick to ‘breathe oxygen’ feels like babysitting – hardly improve the new features’ collective image; the only saving grace is a new real-time Rewind function which saves your bacon at the cost of letting everybody else race ahead while you correct your mistakes. But even that falls flat when you’ve gone so far before making your mistake, meaning rewinding is futile and a full restart is needed. A lot of the new features are, frankly, a mess.

Where SSX succeeds is in doing what it knows best, which is to wow you with your own ability in its other game modes. The Explore mode leaves you to do whatever events you want on whatever mountains you’ve unlocked with whoever the damn hell you like, and an Autolog-style system called RiderNet recommends you new events to do depending on which events you like best and if your friends have beaten your scores. You can leave collectibles hidden in every level for other people to find, which can boost the money you use to buy new snowboards and other equipment.

But the real meat of SSX lies in its Global Events. While the game is lacking in real-time matchmaking, EA Canada has opted for an online feature much better in the long run: an essentially endless array of challenges with a dazzling prize pot at the end for winners. Entering sometimes costs, but if others are racing at the same time as you, you’ll see them side-by-side on the run in real-time. Imagine it as a real snow resort, with other riders doing their thing all around, and you get the idea. It’s very cool, and the huge money on offer is great for boosting your in-game gear collection (provided you have an Online Pass, which is the one gateway to actually picking up those winnings).

There’s a number of things that eat away at SSX‘s core: it’s not the prettiest EA Sports title, not by a long shot, but the crisp whites and contrastingly vibrant red oil pipelines of Alaska are a particular highlight, and it’s generally alright to look at. But this doesn’t matter when the game is as impressive, but as dull, as a bank manager’s wealthy portfolio. 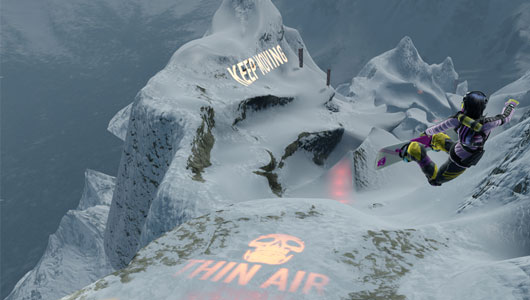 Each Deadly Descent in SSX features Splinter Cell-style imprints on the environment warning you of upcoming hazards.

What really whittles down SSX is that it’s lacking the one thing the titles of old had in spades: character. This is an SSX for the dubstep generation, one that listens to Skrillex rather than Space Raiders; not that it’ll matter once you’ve put on your own soundtrack, and experienced the surreal ‘Remix’ feature EA have created, which fades and mixes your music with the on-screen action as it happens. The new characters are as dumb as a doornail and the old ones are barely recognisable. The new parts of the game feel completely diluted, and the only thing that is truly great about the game, at the end of the day, is the pure SSX gameplay we’ve all known for quite some time.

When the debut trailer for the game was shown, there was a lot of negative reaction and as a result, brighter, peppier trailers were shown later on, probably as a result of reworking to make the game appeal to fans of the pre-reboot series. As a result of this Frankenstein-esque amalgamation of old SSX and new, the game feels disjointed and conflicting with itself, unsure of whether it’s a hyper-realistic death-defying jaunt through avalanches and run-ending cliff drops, or whether it’s really just a chance to be an awesome snowboarder. That the latter shines through so much once World Tour is dealt with is testament to SSX‘s long-term appeal, yet at the same time you can’t help but question why they bothered with everything new when you’re going to hate it anyway.

It has been difficult deciding just how ‘high-quality’ a title SSX is, but time and time again each perfect combo run and extra Online Event prize answer the question for me. The World Tour takes very little time to beat and, difficulty spikes and unnecessary character exposition aside, is generally fun because it’s mostly comprised of classic SSX gameplay. The game as a whole is wicked fun, both nostalgic and fresh all at once, and provided you just breeze through the ugly new additions with your eyes shut you’re in for an absolute blinder of a time.

Brilliant, relatively untouched core gameplay
Online Global Events are a masterstroke when combined with RiderNet
A whole array of new features that, frankly, are a hindrance
A complete dullard in terms of personality
SSX – Official website
The review copy of this game was provided by EA.