I was lucky enough to have recently attended an early presentation of Assassin’s Creed III. I know most of you probably want to hear about the hog roast that we had afterward, but for those of you that care more about games than pork products Tommy Francois, IP Director of the AC franchise gave us some details and showed us a context video, an early pre-production video and a full ten minute gameplay video. I blended with the crowd and was able to overhear the following details.

The Animus may be the ideal technology to help Desmond relive the past, but with Assassin’s Creed III, Ubisoft are looking to the future. The game has been in development for two to three years, since the “senior” team finished production on Assassin’s Creed II. The latest installment of the franchise has a number in the title, meaning that unlike Brotherhood and Revelations, ACIII features a new “historical playground” – set in the New York and Boston area of Revolutionary America – along with a new protagonist named Connor Kenway and a whole new engine, AnvilNext, developed especially for the purpose. AnvilNext is said to be capable of delivering improved graphics, more detailed character models and revamped crowd AI with increased interactivity with NPCs. This is clear when we are shown a close up of a character model with double the previous number of bones in their face (compared to older AC titles) or a battlefield with up to 2,000 people simultaneously waging smoking-musket warfare. 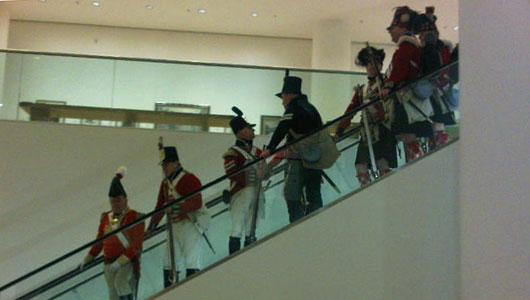 The new AnvilNext technology also allows for a new fighting system, with more brutal two handed combat and a whole set of new animations. Rock climbing animations have been added for much more fluid, natural movement when scaling rock faces and new animations have been added to allow Connor to move naturally across uneven or undulating ground and when traversing through the heavy snow of the new environments. Connor can move through the natural environment in a way which looks much more lifelike, counter-balancing his own weight when moving rapidly downhill or slowing down to deliberate plodding steps in heavy snow drifts.

Those worried about concerns of the rooftop-heavy action moving to a more natural environment with sparse density or a lack of tall buildings can rest easy: not only has this been thought about, but some solutions have been deliberately integrated into the technology or design of the game. These include simple elements such as having trees as jumping points in between buildings in towns, alongside more complicated adjustments that allow you to easily traverse the natural environment in a way only previously possible on the more rigid man made structures of the Italian and Middle Eastern urban settings. We are told that “vistas are still an important part of the game”, as “social stealth is all about understanding your environment”.

The ten minute long gameplay video we are shown at the end of the presentation is testament to seeing those solutions put into practice. The trees offer an “organic climbing puzzle” and not only do Connor’s movements across their branches look precise, but the trees also react to his movement, bending or drooping under burden and springing back up in a cloud of disturbed snow as our protagonist elegantly lurches from tree to tree. The Frontier is the natural environment where roughly 30% of the games missions take place and is approximately 2km by 2km, making it roughly 1.5 times the size of Rome in Brotherhood. Everything in the environment is climbable and we are told that moving through the environment should “be as fun as skiing”.

The gameplay demo also allows us a first glimpse at some of the other improvements that will lead to increased fun or immersion. Leaps of Faith can now be done on the move and into moving objects; the example on display is Connor jumping into the back of a moving cart. It also appears as though snow has replaced the age-old hay of yesteryear to break your fall when Faith-leaping, a better fit as it is for the setting. Connor automatically crouches whenever he enters foliage and there is evidence of some sort of cover system with cover-to-target kills available. One of the nicest new additions was the inclusion of internal environments during chase scenes – a first for the franchise – and seeing Connor dive through someone’s house to keep up with his escaping target seems so natural and realistic you might wonder how the series has got along without it to this point. Technological advances have also led to the inclusion of a detailed weather system that in turn affects gameplay. Fog will make it easier to sneak around unseen, but perhaps most significantly rain will prevent muskets from firing, meaning tactics will have to change depending on the weather.

The story takes place over a thirty year period of Connor’s life from 1753-1783, and much care has been taken to preserve the accuracy of the time frame while still keeping the gameplay as fun as possible. During production, six people have been working full time purely to research the American Revolution. Care has also been taken to ensure that the new technology works well alongside the artistic vision and the core concepts of the Assassin’s Creed franchise. The universal themes are listed as; Liberty or Death, Power or Oppression, Control or Freedom, Being a Nation’s Pioneer and Inspiring the World to fight for freedom. We are told that Altair story boiled down to “duty”, Ezio’s to “revenge” and Connor’s story is motivated by “justice”, after his village is burned down as a child. Major historical figures from the time will make an appearance with Washington, Lafayette and Charles Lee woven into the tale. It appears as though Benjamin Franklin will be stepping into Da Vinci’s shoes as your slightly mad but very helpful inventor companion.

The early pre-production slice of the game hints at some factors that fell by the wayside while designing the game, highlighting the meticulous research and efforts of the team. Scalping was removed from the design doc when it was realised that Connor was the wrong type of Native American to take part in this tradition. There was also a Chain Blade that could be thrown at enemies and then pulled back in; this has been replaced with a Rope Dart, which can still be used for the purpose of ensnaring people and hanging them from tree branches, but is less of a departure from the technology of the time period. The animals found in the Frontier are said to help produce some “magical moments with animals never before seen in videogames”. It seems as though they were much more excited about this before Red Dead Redemption beat them to the punch, but hopefully this will allow them to learn from some of Rockstar’s mistakes.

As a response to accusations of franchise fatigue, Assassin’s Creed III seems like it is aiming to hit beyond the heights the series has previously been capable of. I had, even as a big fan of the franchise, begun to lose a little faith with the series. With everything I have seen added, my faith has been restored and I am eagerly awaiting the opportunity to leap back into the hay, even if it’s now snow. Tommy was clear to point out that Ubisoft now has more than six months to just add levels of polish to the game before its release shortly before Christmas. Let’s hope they are put to good use as the time and effort put in so far seems to have resulted in a game of the high standard fans were hoping for.