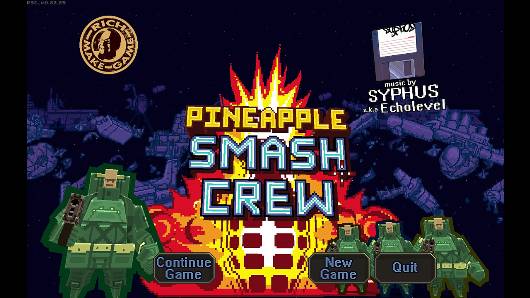 The indie development scene has been heavily populated over the past few years by retro-looking games powered by modern engines. This has resulted in mostly competent, fun experiences that instill a profound sense of nostalgia to a large number of adult gamers. Team Meat’s Super Meat Boy was just about perfect in its design, both mechanically and graphically, and it stood out, and held its head high among the heavy hitters of today’s big-budget industry.

Pineapple Smash Crew occupies that very same space, evoking classics like Alien Breed and Cannon Fodder, but unfortunately pulls too many punches to allow it to stand out in any meaningful way today.

Pineapple Smash Crew begins simply enough: You are given a list of missions to choose from in which the win parameter will be one of three objectives: Clear all enemies, destroy all toxic containers, or find all artifacts, in the red rooms on the map. Each mission spawns a randomly generated map that displays its full layout in the top-right of the screen, clearly showing the red rooms (mission objectives), the Communications Room (in which you’ll find a computer that increases your chances of finding the Mothership, as well as providing an entertaining written log to read regarding “The Wasabi War”), and each of the ancillary rooms and their adjoining doors.

The object of the game is to complete enough missions to successfully calculate the coordinates of the Mothership. Along the way you will earn credits that will level up your team, allowing you to unlock a variety of grenade pick-ups. Credits also act as a continue mechanic, letting you pay for a new team to teleport into the place in which you just got wiped out. At the beginning of the game credits don’t really come into play outside of unlocking grenades, but as you progress through the latter missions death becomes pretty much inevitable, and credits will be used more often than you’d like in order to bring in new team members in place of the useless ones that got themselves killed!

Okay, so maybe it was my fault that they all died. And also the group after that … and after that. The point is that Pineapple Smash Crew, though reasonably difficult, plays really tight, and by that I mean there’s a great sense of control over every action your characters make. Every time I lost a party, I knew it was due to me doing something stupid. Maybe I didn’t pay attention to the explosive canister next to me or maybe I shouldn’t have ran past twenty enemies into a dead end. There were times when I would throw a grenade and have it land somewhere completely useless just because I was paying more attention to running around like a headless chicken rather than aiming or detonating at the appropriate time. 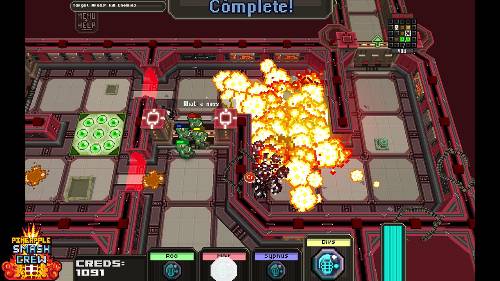 You have four characters that move around in tight formation, each equipped with a basic machine gun that relies on a rechargeable cell in lieu of ammunition pick-ups. The first thing you will likely learn, in point of fact, is how important it is to manage the use of that weapon versus your grenades and dodge-and-hide tactics, which will allow enough reprieve for that power cell to fully recharge. The machine gun doesn’t do a great deal of damage and becomes somewhat less useful towards the end of a campaign, but it’s invaluable at the start of each playthrough — prior to unlocking your array of grenades — and learning how to manage the timing of firing versus recharging makes for a much less irritable time.

Which brings me to the key marketing point for the game: grenades. There are thirteen grenade types in total, with a ranging array of abilities that — when controlled by a mindful player — can be used in combinations to clear entire rooms or just flat-out save your proverbial bacon. Grenades are available as randomly dropped pick-ups when enemies are killed, and each of your four characters can only hold one each at any given time. The mouse wheel switches between which character takes point, which in turn defines which grenade will be used when clicking the right mouse button.

You will start each playthrough with only two pick-ups unlocked: frag grenade and rocket. The frag is pretty self-explanatory: One click fires in the direction you’re aiming, and a second click detonates it. The rocket is similar, but rather than simply detonating on the second click, you can change the direction and have it plough into something — or someone — that is potentially around a corner. Other grenade types include a warp that sucks everything within its radius into its centre (including projectiles), and a teleporter that not only moves you instantly from point to point but kills anything in that line. The ability to control the flow of combat using grenade combinations in collaboration with environmental hazards and four power-ups gives Pineapple Smash Crew a very strategic edge that is seldom found even amongst big-budgeted action titles. 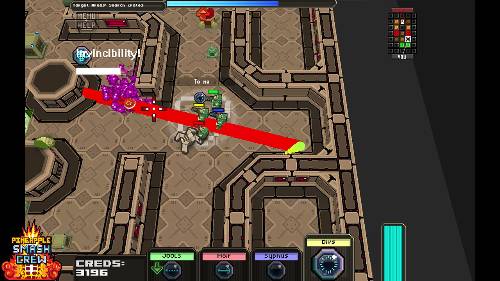 I found myself playing the game for 15-20 minute chunks at a time, for the most-part. Sadly it does begin to feel repetitive all too quickly. The grenade types are fun to begin with and learning what combinations to use in certain situations is great, but once you’ve unlocked more than six varieties of pick-up, the ones you truly want to keep using — including the essential health grenade — begin to drop less and less in favour of less useful ones. To be fair, the drops are entirely random and there’s always a chance that you’ll come across useful pick-ups all the time, but the inevitable downside to increasing that pool of potential drops is that you are less likely to find one you really need at any given time. This is a trait that is shared by a lot of Rogue-likes, and there is certainly an audience to be found that would consider it endearing, but that doesn’t make it any less infuriating when my team is in dire peril, and I haven’t seen a health pick-up at all within one mission.

Bosses appear on the more difficult missions within the final objective room on any given map and make for a nice change of pace to start with, but it quickly becomes apparent that there is only one type of boss, the only difference between them is the amount of shielding they have to start with. And as for the final mission of your playthrough? The Mothership is no different to any other randomly generated map in the game, it’s just a bit bigger and has better shielding. I feel like the way to go here would have been to make a greater variety of boss archetypes, maybe throw in a consistent, more exciting Mothership map and unique end-of-game boss? 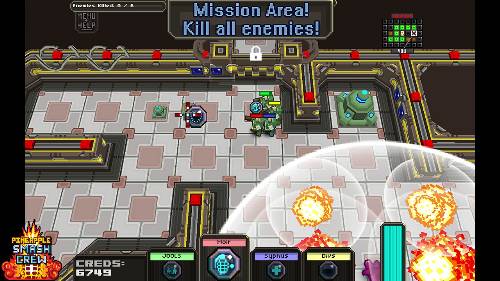 There’s also an argument to be made that Alien Breed, Cannon Fodder and Chaos Engine — all marked as influences on the game –were at their best when playing with a friend — a feature that Pineapple Smash Crew is noticeably lacking. It could be argued that no game should be judged based on what it doesn’t have, but the lack of cooperative play here is glaring and seems, given the genre, a completely necessary thing to have included.

Pineapple Smash Crew offers a really engaging experience, but only if that experience is segregated into relatively short play sessions. The combat is incredibly engaging, especially when it eventually becomes very hectic,  but there’s no denying the repetitive encounters that will occur with the short list of enemy archetypes and environmental hazards. I can’t help thinking that if the map style changed as the campaign went along, and if the bosses were more varied in ability and design, that sense of repetition would be far less overt. Completion progress is shown in an entirely generic percentage value, and any sense of escalation throughout a playthrough is countered by the final mission being nothing more than just another random map.

That all being said, I can’t deny that I had a lot of fun with Pineapple Smash Crew. Even if it did drag a bit towards the end, the core of the game is as solid as any fan of shoot-em-ups could desire. And despite its anti-climactic ending, it is definitely worthy of its intention of being a replayable experience. Were it to come to a portable platform and include leaderboards, I know it’d be a game I would keep on hand at all times.

It’s also worth mentioning that this entire game was created by one guy, Rich Edwards. And the stellar soundtrack is by chip-tune artist, Syphus.