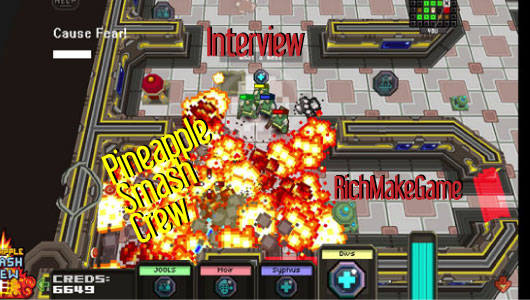 Those of you clever enough to have already read Kev’s review will no doubt know exactly what we think of Pineapple Smash Crew. Those of you of even greater mental acumen will have already watched our Big Red Ramble and will most likely be aware of the very small part that Kev and I played in helping to push Rich Edward, the creator of the game, into his first meeting with Valve.

We have been keeping a close eye on the game ever since. Now that it has finally been released, I took some time to catch up with Rich to Smash through some questions and get some details on all things Valve and Pineapple related.

We first bumped into you showcasing Pineapple Smash Crew at the Eurogamer Expo last year. How useful was the experience of being able to show the game to the public and get some feedback?

RichMakeGame: Eurogamer was amazing! I’ve never attended an event that big, and showing my game to people in person was quite nerve-wracking. It was hugely helpful though. I’d had people testing the game over the internet, but it’s never the same as watching over their shoulder how they play.  And you do have to bite your tongue and just watch. It’s so tempting to slide over and offer tips but if people are having difficulty, it’s best to just let them and mentally work out how you’re going to stop that happening in future. I came away with a full notepad :).

After talking to you at Eurogamer, you have patched in an early form of 360 pad support (good news for the less mousewardly mobile of us). Is this a function you will look to support in the future and does it indicate that we could see a console version in future too?

RMG: Yeah, it’s only in a rough state at the moment which is why I don’t advertise it on any store page, but I intend to go back and improve it. Part of the problem is the menus, there’s a fundamental difference between selecting and clicking with the mouse, and having menus you can flick between options using a pad. I’ll certainly give it some attention. I don’t have any plans to bring the game to console as of now, though.

You have mentioned that two major influences on PSC were Alien Breed and Cannon Fodder. What made you chose this style of game and what were your other influences?

RMG: Yeah, there’s a ton of influences mixed in there – basically everything I used to play as a kid! Alien Breed mainly influences the setting and atmosphere, Cannon Fodder – I kind of wanted to get the feeling of ‘team’ into a single-player game, and feeling protective of them. It’s a sad moment when any your very first guys kicks the bucket. I initially had a mechanic where you could split the team up, but it slowed down the pace a lot. In the end I decided to remove it and make the game more action-focused. But I hope the vibe still remains! As for other influences, I used to play Space Hulk, so I loved the idea of these tile-based spaceships, and how you could create so many different play areas with the same set of tiles. And there’s an old Mastersystem/Megadrive game called Gain Ground, which features characters with different abilities. I had the idea of combining that with the random presents in Toejam and Earl to create the random grenade pickups. I think Pineapple Smash Crew turned out to be quite a different game to any one influence, but hopefully you can see the connections.

There are lots of humourous cult movie references throughout the game. Are there any well hidden gems or personal favourites?

RMG: Hehe, yeah one of my favourite movies is called American Astronaut, directed by and starring the genius Cory McAbee. In the film the main character visits a space-bar and asks if he can use the bathroom, and the bartender replies ‘sure… it’s a real toilet, so be careful’. Sometimes the Mercs will talk about visiting the Ceres Crossroads and marvel at it’s genuine toilet

What is your favourite/most effective grenade combo?

RMG: Ooh, tricky one! I’d probably have to go with Bait and Mine; it makes me feel clever :).  It’s particularly good if there’s any of the orange exploding bugs nearby and it causes a chain reaction.

How has it been working with Valve? Could you briefly describe the process of getting your game onto Steam?

RMG: Yeah, a few indie developers have been interested in this. I’ve been very lucky with the chain of events – firstly, I was selected for Eurogamer by Indie Arcade organiser David Hayward (who worked on the original Alien Swarm mod), so a huge thanks to him for the opportunity! I was then lucky enough to be selected by Rock Paper Shotgun to win their Indie Arcade award, and, finally, that’s when I met you and Kev White just after you’d been to see Valve. They were at the show to demo the new Counterstrike GO – I remember you mentioning Chet Faliszek was around and that I should try and have a word about getting onto Steam. It turns out that was a great suggestion! I had to wait until Eurogamer was winding down because the Counterstrike area was so crowded, but eventually I spoke to Chet and he introduced me to Anna Sweet – thanks to the RPS award I convinced them to come see the game. I was extremely nervous but they liked my pitch enough to sign me up :). So I need to give a huge thanks to you and Kev for the tip!

How long have you been working on Pineapple Smash Crew in total and how does it feel to finally release?

RMG: I started the very first version of PSC back in February last year, so I’ve spent about a year now working on the game. It feels amazing to see it out! I used to work in a bigger company, but they went under, and starting up by myself has been lonely in comparison – most days sat in a small back room “office” working away. So when I get feedback from people who have enjoyed the game, it’s fantastic – makes the sacrifice feel worth it, and less lonely now that everyone can see what I’ve been working away on :).

RMG: Good question! It’s hard to pin this down. I’ve always loved games, and I’ve often had ideas for things that I’d like to play but don’t exist. So that’s where the motivation begins, but it’s incredibly satisfying to make something and say, “this is what I like” and for other people to respond and say “me too!”. I think its mostly the latter that makes me do it.

RMG: Another tricky one! It’s a bit of both but definitely again much more towards the latter. I’m not super geeky about designing the perfect system and being proud of my creation- it’s much more about what feeling the game evokes when you play it.

What is the best piece of advice that you would give an up and coming independent games designer?

RMG: Well, as you can tell from the Steam story it’s incredibly difficult to intentionally engineer all the things you’d like line up so you can be noticed. I think the best thing to do is focus on making a game which you enjoy playing so you’re confident at least some people will like it and then try to get it to as many conferences, trade shows, etc. as possible. You can’t engineer your chances, but you can improve them by getting yourself in front of other people. If you look at all the steps getting the game on Steam, each one involved making contact with new people.

It is a nice feature to never have to fight through the same environment. What are the challenges of designing a game with procedurally generated levels?

RMG: It was pretty tricky. On first glance, you might think, “well, just random everything and there you go,” but if you do that it’s a total mess. You have to somehow funnel the process towards getting a result that looks like someone *could* have designed it by hand, rather than pieces just falling out the sky and landing where they land. That was a good portion of the work.

There is some great music in the game, supplied by Syphus. Are you a general fan of chiptunes or was it just a good fit for the retro feel of PSC?

RMG: I’ve always been a fan of chiptunes. I’m partial to some Trash 80, DMA-sc (and anyone in the YM-Rockerz such as 505 and crazy-q) and Tettix. I was searching for artists I liked when I found Syphus and noticed he lives in the same city (Newcastle, England) – it seemed like a sign! He did a fantastic job with the soundtrack :).

Do you eat your 5 portions of fruit and veg a day? How many of those portions are pineapples?

RMG: I eat a pineapple every day. Not the fruit though, just mk2 fragmentation grenades.

What is next for RichMakeGame?

RMG: Ooh, top secret! Nah, I’m (half) joking, in the immediate future I’m going to focus myself on support for PSC. I’m working on an initial bug-fixing patch with some extra usability features, and then I’ll plan an update with extra content to keep things fresh :).

Thank you very much for talking to us today and best of luck for the future!

RMG: Thanks for the opportunity to talk with you and your readers!