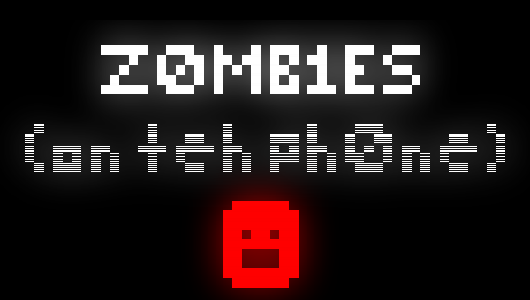 Z0MB1ES (on teh ph0ne), as you may have guessed, is the Windows Phone 7 port of the highly popular and successful Xbox Live Indie Game, I MAED A GAM3 W1TH Z0MB1ES 1N IT!!!1. This is the third outing that James Silva (of Ska Studios) has made into publishing an official Xbox Live Arcade enabled title cutting his teeth in the Xbox Live Indie Games.

Rather than take the easy route by simply porting the original game to the mobile platform, it’s refreshing to see that Silva has made Z0MB1ES into a package deal.

It features the original IMAGWZII in all it’s rocking glory, the room clearing ENDL3SS Z0MB1ES!!!1 mode and the spiritual successor to Z0MB1ES, the side-scrolling title Time Viking. All three games are a twin-stick shooter variants on the same objective:

“Shoot everything you can and don’t die!”

So far, you’d be forgiven for thinking that this sounds like pretty standard stuff for this genre of arcade game. So what makes Z0MB1ES different and worth parting with your hard-earned cash?

Simply put, this top down twin-stick shooter refuses to take itself seriously. This is made wonderfully clear in the rock soundtrack to IMAGWZII, which was written and performed by its developer. This magnum opus of rock features such incisive lyrics as “I made a game with zombies in it,” “It only costs a dollar” and “I hope you like it”.

Whilst the soundtrack might not be shuffling its way to the top of your MP3 playlist, the music has gone a long way in making this game so popular and successful. The whole game revolves around it, with the arena and enemy types changing as the song gets into a new chorus, or interlude. 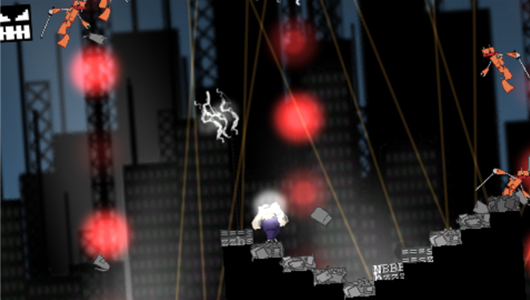 The power to kill a robot, from 2 inches away... with MIND BULLETS!

Time Viking continues this trend, with the touch of heavy metal you would expect from a title such as Time Viking. Your character is a viking (obviously), thrown forwards through time (again, pretty obvious) and has to destroy enemies and other destructible items to build a tower high enough to destroy the moon … oh, and he does this with mind bullets, cleverly disguised as lightning bolts. Win.

Much like the other titles in this package, Time Viking is a frantic twin-stick shooter but mixes things up by chucking in a tower building mechanic to the side-scrolling action.

The basic premise is that Time Viking is limited to moving around the top of his tower (of Nordic power), but, because he’s a complete and utter bad-ass, the debris from your fallen adversaries adds to your raging tower’s height. But whilst the top of your tower is the only area on which you can move (and very limited), it’s still defendable with the aide of some mind-bending, mind bullet powerups.

Since that’s not enough of a challenge for a time travelling Viking bad-ass, even despite the strobe lighting effects, hard rock backing track and other accoutrements, the camera tilts in time to the heavy metal soundtrack in this game, meaning you need to be quick to notice this and adjust your twin-stickery to match.

It’s highly addictive once you get into a good groove, and soul-crushingly frustrating when everything goes pear-shaped. Still, if you ever wanted a decent game to play as a lightning-wielding Viking (and let’s face it, who doesn’t?), this will definitely give you a good fix.

The final game in this trio of frenzied madness, is ENDL3SS Z0MB1ES!!!1, essentially a mod on the original IMAGWZII that features a room to room endless survival mode. Y’know, just in case seven minutes of zombie shooting mayhem wasn’t long enough for you.

Each room is kitted out with different types of enemies, much like the originals various waves. To keep you from playing the same easy rooms over and over, the game forces you to play through eight rooms in the 3×3 grid before you can return to the centre room. There’s even an achievement for being able to do this three times. 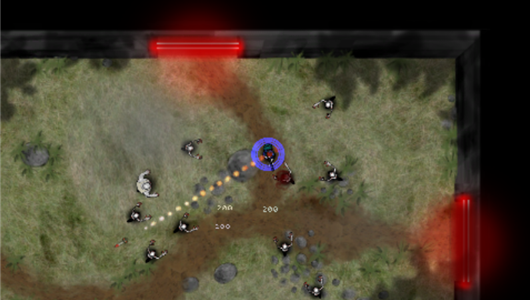 More zombies than you can shake your thumbs at!

Whilst entertaining enough, the move from a console arcade system to Windows phone has led to a few niggling issues. Chief among these being that none of the game modes can be paused to take phone call, or when you’ve exhausted the period of time that is reasonable to be on the toilet, foiling your efforts to achieve a high score. As soon as you hit the Windows home button, or accidentally hit the search button, your progress is lost, meaning that if you want to do well in this game, you need to carve out some time in your day to concentrate on it. While that’s fine on the Xbox 360, it’s something that takes part of the mobile aspect away from mobile gaming.

Then there’s also the Mega Games Creator 2000, which allows you to swap out the enemies in the two Z0MB1ES game modes for pictures you have stored on your phone. Great, if your phone’s photo library is filled with people you hate, but they’re likely to be your friends and family.

It’s pretty crude in it’s design, and from experience, it actually makes the game difficult to play. The circled pictures that result from importing images from your library are larger than some of the enemies, giving you false targets to hit and avoid. It also means you’ll be missing out on some of the interesting enemy designs in Z0MB1ES and of course the wonderfully over-the-top graphic violence that has been a staple of Ska Studios.

These issues aside, it’s a good way to kill some time, and even better when you’re listening to the theme tunes (even if you’ll have them stuck in your head for days afterwards).

I MAED A GAM3 W1TH Z0MB1ES 1N IT!!!1, evidently wary of violations of the Trades Description Act, remains true to it’s theme song; the game only costs a dollar. But since this is a bundle, so do the other two games, meaning that you’ll be parting with 3 hard-earned dollars for the lot.

This Game was purchased by the Reviewer.
Official Game Site Link