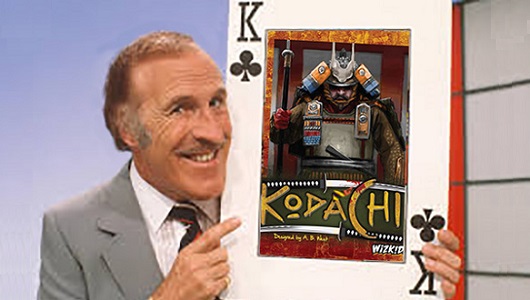 A deadly game of Bruce Forsyth’s “Play Your Cards Right” may not sound like a recipe for success, but here we are. Not only is this Ninja-themed push-your-luck game possibly my favourite game of 2019 but also a strong (or sneaky) contender for my favourite ever small box game.

And it crams a lot into it’s small form structure. This makes more sense when finding out that this was originally a larger game (named Ninjato) that was reworked and streamlined into this new more compact version. It feels efficiently elegant and refined — distilled to its purest form. Super-concentrated ninja flavoured greatness.

The end result is a game that feels somewhat larger on the inside than the outside. The small box houses big crunchy gameplay with seemingly easy decisions balanced with weighty consequences. In turn players reveal a Guard and a possible reward. The Guards are the currency required to trade in for the reward cards and the currencies come in four types – as well as a gold coin that can represent any of the four. The artwork is attractive and the symbols clear and logical – making some of the initially difficult to grasp mechanics easier to follow and once mastered, easy to pick up and play again.

The push-your-luck element kicks in after overcoming the first Guard and choosing to venture on for the possibility of defeating more Guards to pick up as many cards in one turn. Interestingly, whatever way you choose to defeat the first Guard sets the style of attack that you must follow for the remainder of you turn. Sneak passed the first enemy (by playing a number lower than the revealed Guard) and you need to carry on sneaking but overpower the first opponent with Strength and you will have to carry on playing higher cards throughout your turn.

Even deeper strategy kicks in when adding the reward cards to your hand. These cards can give you more skills to help you win battles or more victory points but also have a value when played in battle. The constant ebb and flow of weighing up the value and possible consequence of adding a card to your overall deck or the hand of cards you have currently available is consistently engaging. While there does seem a number of possible routes to victory, it does feel like the game rewards the player most able stay alert and adjust their approach on the fly. Which is not only fun but feels very in keeping with the theme.

I especially like that Kodachi also does a great job of keeping non-active players engaged – principally by offering the possibility of rewards on other players’ turn. A few other people I played with commented that they were surprised or disappointed that there is no direct player interaction – while I am a fan of take-that style mechanics or player on player combat, this game benefits from not doing so. A player’s turn can be lengthy at times (by luck or just being later in the game and having lots of skills available) and player interaction would disrupt the flow of the game. I prefer to see a well designed and implemented way of keeping non-players invested in other player’s turns – and Kodachi does that well.

Quick to play and scales in interesting ways for two to four players. Everyone who I have played with wanted to play again, including me. This is one of those games that anytime anyone says they want to sneak in another quick game I will jump at the chance.