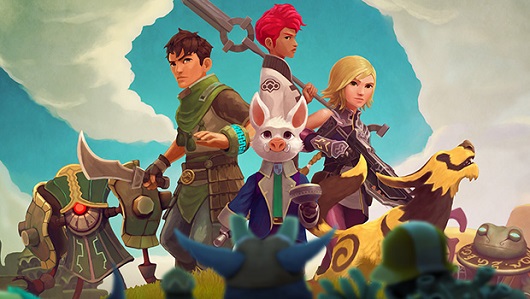 Originally released in September 2016, I had seen Earthlock: Festival of Magic pop up several times on the PlayStation Store, but for some reason, I never picked it up despite the fact I’m a huge fan of Japanese style RPGs. As it turns out, waiting may have been the right choice. Roughly six months after its initial release, developer Snowcastle has opted to stop pre-production on its sequel and instead switch its attention back to Festival of Magic, a game that in their own words “wasn’t quite there in terms of quality”.

Over the following few months, they fleshed out the entire game from the story to the game-play, even retouching the animations. For everyone who had already bought the game on PC and console when it was known as Festival of Magic, they got the game-changing update for free. Finally, they dropped the subtitle and released the fully updated title on the Nintendo Switch as simply Earthlock.

The newly released version of Earthlock is a fantastic little RPG, heavily inspired by old school JRPGs that Square was known for in the 90s, and for the most part, it’s a great homage to that era of gaming. It has a cute, simple visual style and an engaging turn-based combat system, a good amount of side quests and distractions to complete over the varied environments, and a fantastic soundtrack.

Where I found Earthlock to be lacking, however, was in the story and dialogue. The main story thread focuses on Amon, a scavenger from the desert town of Zaber who, along with his uncle, finds an ancient artifact in an old ruin. After his uncle is kidnapped by a mysterious organisation, it falls to Amon to find his uncle and keep the artifact safe.

Along the way, he meets and joins up with several characters, each with their own missions and stories that all end up weaving together more out of circumstance than fate. There’s a bit more to it than that but I would hate to delve into spoilers. It’s not a bad story by any stretch of the imagination, it’s just a little simple for my taste. 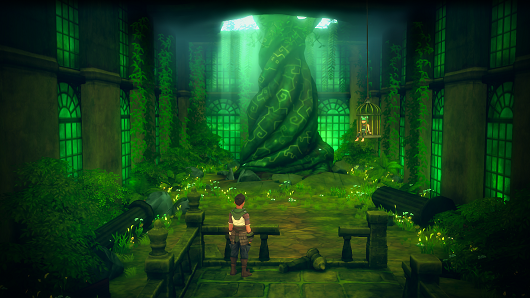 There’s almost no conflict or resistance between the main cast of characters. Whenever Amon meets a new party member, there’s a brief explanation about the missing uncle, the new character explains their mission and then that’s it, everyone agrees to help out. No one’s mission seems particularly important, and they all just kind of bumble along the path to the end game.

Even major twists and important plot points are glanced over. More than once, there would be a big revelation and the most the party could muster in response would be an “Okay” before moving on to the next thing. Usually, this kind of quick-paced conversation would be welcome in a genre that’s known for lengthy dialogue sections, but the quick talking and simple language goes a long way to detract from any major character development, at least where Amon is concerned. A couple of the other party members fair a little better, and I hope the success of Earthlock gives Snowcastle the opportunity to hire some extra writers for the sequel to really flesh out what has the potential to be a lore-rich world.

Earthlock’s biggest strength by far is the combat system. Enemies can be seen walking around the overworld and dungeons, and once an enemy sees you a ‘!’ appears above their head and a countdown begins. Pressing circle before the countdown ends initiates battle with a First Strike advantage to the player party. Fail to initiate battle, however, and the advantage goes to the enemy. Initiating battle instantly seems like the obvious solution, but aggro-ing multiple enemies and pulling them all into the same battle will give you a massive exp and reward boost so there’s a true risk/reward element to how you approach encounters.

Once initiated, battles are turn-based, and each character has two stances. Whichever stance a party member is in determines which abilities they can use in that attack round. It is possible to switch stances during battle, but it uses up that character’s turn. 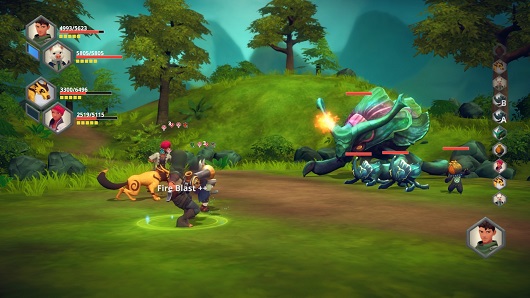 Combat menus are fantastically streamlined; the left analog stick is used to select between items and abilities, and each item and ability a character has assigned is mapped to one of the face buttons. R1 allows a character to change stance and pressing L1 once the Bond bar is full will make a character switch to a Super stance for a short time, giving them access to more powerful attacks.

Party members are paired up, and as well as gaining regular XP for defeating enemies, each pair also receives Bond XP. Character pairs can be levelled up five times and each level gives the pair access to helpful passive abilities and an increased Bond bar giving them extra time when in Super stance. These perks are only available when the two characters are paired together.

For such simple ideas both the pairing and stance systems add a real level of strategy to combat and party creation. Working out which party members’ abilities and pairings best complimented my play style added some much-needed depth to what could have been just another standard turn-based battle system. 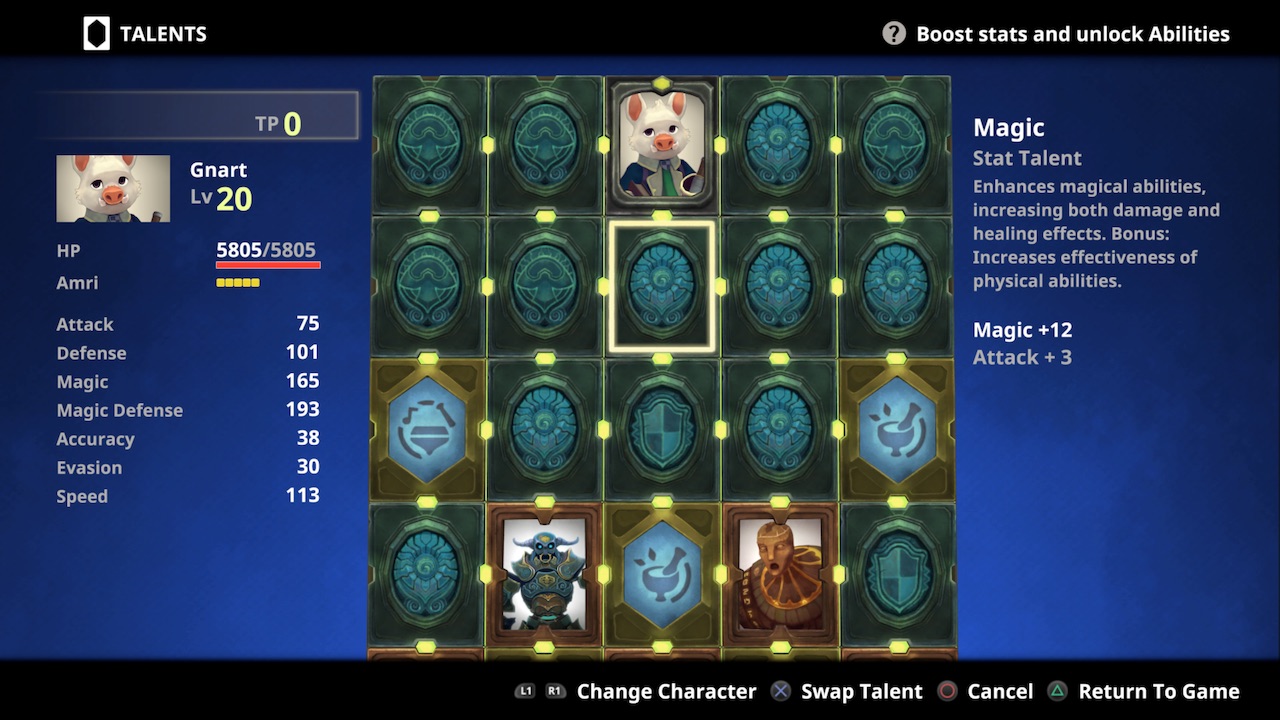 Although simpler than similar systems in bigger budget games, the talent board is a great inclusion that allows for quite in-depth character customisation, complementing both the aforementioned pairing and stance systems, allowing players to create unique custom parties out of the 6 eventual available party members. Another strength of the freedom of these systems becomes apparent when tackling tough bosses; I’d occasionally feel like I’d hit a wall in the difficulty, but after spending a few minutes readjusting my party (and gaining a couple of levels) I found that all challenges could eventually be overcome.

New abilities are found as treasure or given as rewards after boss fights, but new talents can be crafted on Plumpet Island once the correct materials have been acquired. Plumpet Island is home to several crafting stations for items and equipment, as well as areas to decipher maps and tablets for treasure hunts, and a garden to grow plants used for crafting materials and ammunition. Once the ability to fast travel between save points and Plumpet Island became available, it became my main hub and I spent a lot more time there cultivating ammo plants and mixing potions than I’d care to admit.

The world of Earthlock, Umbra, is small but varied. It consists of five main overworld areas, each full of side quests and hidden challenges, and a selection of small dungeons to explore. You can select any character from a radial menu to be the main character you control in-game, and each character has his or her own ability that can be used to some effect while exploring, for example, the character Gnart can pick plants that give the party temporary stat boosts, and Taika can dig for treasure. It’s a nice idea, but I did find the switching back and forth between characters could get little jarring while trying to explore certain areas.

Overall I enjoyed my 23+ hours playing Earthlock. There were a couple of areas and bosses where I felt a severe difficulty spike and admittedly lost my temper and had to walk away for a while (I’m looking at you, Desert!), but I found that most situations like that could be solved with a bit of levelling and some talent readjustment. And although I feel like the story and dialogue needed some work I absolutely adore the combat and talent system and can’t wait to see how they evolve in the sequel.

If you’re a fan of Japanese style RPGs then I can’t recommend Earthlock enough. Snowcastle have the beginnings of what I hope will be a fantastic series, and I can’t wait to see what comes next. In the meantime, I think I’ll be tracking down the companion comic to see what else I can learn about the world of Umbra.