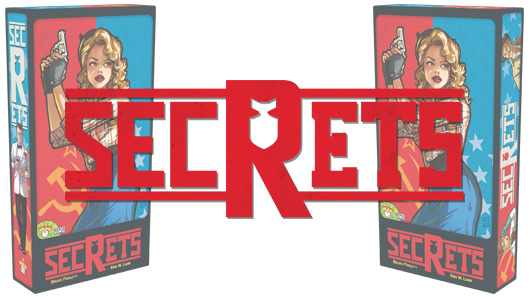 [REDACTED]s is a Cold War themed team based hidden identity game for four to eight people. Whether you are a member of the KGB or the CIA your goal is to make use of the characters at your disposal with the aim to have the best score at the end of the game in combination with your teammates. The only difficulty here is identifying loyal teammates and enemy players as well as being mindful of the pesky hippies. The Hippie can save the world and only wins if they have less score than any other player.

Everyone’s identity is kept [REDACTED] at all times and designated by Identity tokens which are randomly distributed at the start of the game, with one unassigned token also in the middle of the table. The Identity tokens are heavy plastic discs, with the three factions etched into them, which have a really nice weight and tactility. Each player then looks at their own Identity token and then other discs are possibly revealed to players based on the number of people playing – for instance if playing with five or six players you also look at the identity token on the player on your right. Identities could be swapped throughout the game and players will have to keep track of the tokens known at the start as well as trying to add to this information throughout the game.
–
Each player, in turn, takes two cards from a deck of character cards. There must always be a choice of two different characters, which are declared to everyone and then marked on a character board so that everyone can easily keep track of the possible options. The active player then [REDACTED]ly selects one of these two cards and offers it to any other player. This player can choose to either; accept the offer, which sees the card placed face up in their scoring area, or they can refuse the offer, which sees it placed face up in the active players scoring area. Having limited information about the cards being offered further adds to the game’s overall nice balance of risk and reward and fun elements of bluffing and deduction.
– 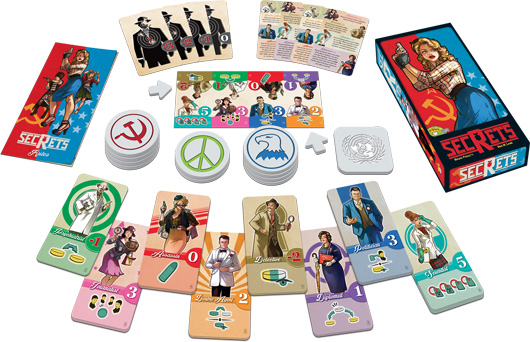 –
Most of the game’s components, especially the aforementioned tactile tokens, feel of high quality. There are nice oversize cards but the artwork on the cards is good and functional rather than particularly outstanding or memorable. The character board is a welcome addition but is bit flimsy and both the board and marker arrows are a bit small for a game of seven or eight people to crowd around. The game’s mechanics are balanced well by the rule changes for four to eight but I found the real sweet spot was seven people – allowing up to three people per team and up to two Hippies.
–
Each type of character card will either positively or negatively affect your points total but each character also has a power which is activated immediately when it is placed on the table. Those characters with a negative score, such as the Psychiatrist or Detective, have potentially useful powers which can swap other players identities or allow you to secretly look at any identity token. The Journalist has a nice healthy positive additional score but at the risky cost of having to show your identity to all other players. The Politician has a similar positive score but has to be given away to another player – whose identity is then [REDACTED]ly revealed to the provider of the card. The Double Agent and Diplomat have a smaller positive score but allow for some swapping and revealing of identity tokens. The Assassin scores nothing but allows the recipient to add a bullet card to someone’s scoring area which has a secret value scored at the end of the game.
– 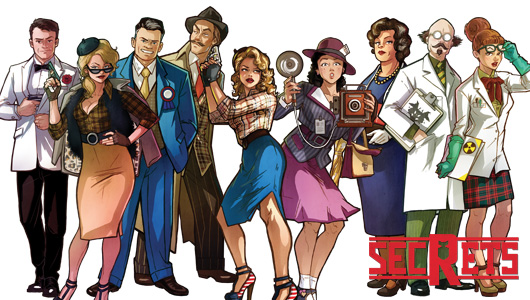 –
The game is over once any player adds a fourth or fifth (depending on the number of players) character to their scoring area. Accepting or declining the offer of a character has an interesting push your luck element to consider – if any player has two of the same character in their scoring area then they cancel each other out. The two cards are turned over and count towards the total number of cards in front of you but without adding or subtracting to your score. This effect is magnified with the most valuable scoring character, The Scientist, as if you have two of these they turn over all cards in your scoring area reducing you to zero. This leads to a variety of entertaining inner monologued, voiced or screamed questions cropping up throughout the game; Is the person offering me this card on my team? Do I even know what team I am on? Does my opponent know what team they are on? Are they being cruel or kind? Do they know I am Hippie?
–
Overall the elements add up to a fun and entertaining game that is relatively easy to teach and quick to play. The theme works well with the mechanics of a generally well-balanced game but this also leads to some limitations. Most games are kept close all the way to the wire with some nice rubber-banding mechanics – being mindful of who the Hippie is and not knowing if team allegiances have or will switch, keeps games close and this is further reinforced by the UN Token. The UN token allows the player with the least number of cards to intercept the offer of any card, keeping it for themselves. However, some players who like to play tactically may find some frustrations when a carefully executed plan played throughout a game can easily fall apart at the last minute with a switch of Identity tokens. While a last-minute switch of teams (or perhaps effectively not knowing what team you were really working for) fits nicely within the theme, it may not sit so well with control freaks. A lot of switching of identities and other changes will happen beyond your control and the amount of reliable information available to you often varies greatly from game to game or even from one moment to the next.
Fun hidden identity gameplay with good quality components
Easily accessible rules to play and explain
Theme and mechanics fit together well
Control freaks might freak out about the lack of control
Strategic gamers might strategically avoid
Board and indicators could be larger

[REDACTED] is a fun, easy to pick up and play hidden identity game that plays best with a group of seven people but still fits well with four or more. Strategic gamers or control freaks are warned that they may have to relinquish some form of control to fully enjoy – and those gamers that cannot do so comfortably should probably avoid. A worthy addition to your game collection given the low price point which should deliver good value for money. [REDACTED] is a nice palette cleansing game that will often encourage players to jump in for a second or third game before they switch their allegiances to another agency.

N.B: We had Secrets as part of our Tabletop Tuesday Christmas Special and a copy will be available to play at Loading Bar in Dalston from now one. You can find more details here.