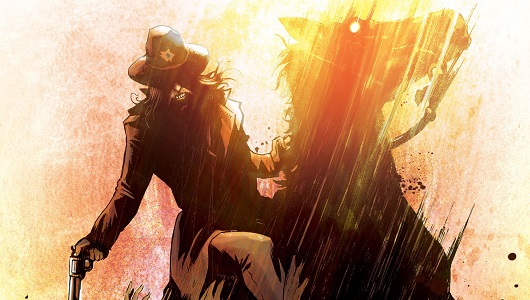 Review: The Grievous Journey of Ichabod Azrael (and the Dead Left in his Wake)

In addition to having the longest title of any graphic novel you’re likely to read this year, the Grievous Journey of Ichabod Azrael (And the Dead Left in His Wake) is also one of the best. Born from the pages of 2000 A.D and collected here in one complete volume, The Grievous Journey… is a western taken to its mythological extreme, as the ultimate stoic gun fighter battles his way from the gates of purgatory to the end of the afterlife in pursuit of lost love.

To say too much of the story would spoil the more inspired twists and turns so I will summarise it as succinctly as possible: Ichabod, the titular gunslinger, is a famous outlaw killed when his lifetime of evil catches up with him. Rather than succumb to the natural order of things however, he does everything in his power to defy the ‘System’ of creation and find a way back to the land of the living in order to be reunited with the mysterious love of his life. Along the way he encounters the hosts of heaven, the legions of hell and a sarcastic talking horse. Who is unquestionably the funniest equine sidekick since Donkey from Shrek.

Although the beginning starts out strong with its supernatural western vibe, it is really a few dozen pages in that the story truly establishes itself as something other than just a neat idea and a gimmick stolen from Garth Ennis’s Preacher. The middle chapters of The Grievous Journey…, at the point where it gets most grievous, are equal parts fascinating world building, high octane action blood bath and metaphysical musings. The fact that the entire narrative and character interaction is shot through with a rich vein of jet black humour raise it above the level of most of its contemporaries. Again saying too much of the dialogue here would spoil the eventual laughs, which I enjoyed all the more for not seeing them coming. But I don’t think it spoils too much to say that one of Ichabod’s companion’s opinions of certain American minorities manage to provoke laughs that would seem in bad taste coming from a less obviously moronic character.

Ichabod himself is an interesting choice for a protagonist, specifically because he seems like the last choice for a hero. It is hard even to call him an anti-hero, since he’s quite content to gun down men, women and children in order to accomplish his selfish goal. His backstory makes no attempt to exonerate or justify his behaviour either, making it quite clear from the beginning that Ichabod’s capacity for selfishness and violence exist for no other reason than to keep him alive against all odds. Luckily the supporting characters provide enough optimism, selflessness and humour to keep the audience engaged with the story, considering the pace at which the narrative moves it’s quite a feat.

The artists too should be commended for finding enough space in all the panels for the dialogue, which adheres to a western style of being simultaneously terse and loquacious. They deserve even more commendation for the world and characters they’ve brought to life. There are no superhero body types here; every individual in the world of Grievous Journey has a figure and facial features you’d find in a seedy saloon rather than at the Avengers Tower. Even the Angels, who look as cherubic and classically handsome as you might expect still lack eyes and carry with them a sense of inhuman emotionlessness. 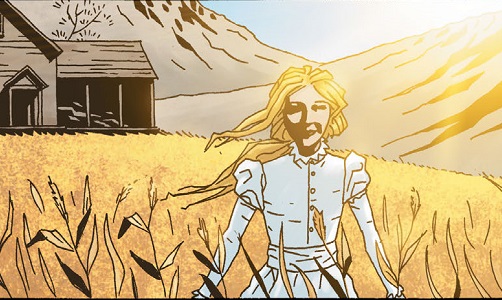 It’s not all doom and gloom in the afterlife.

Colour is used particularly effectively in the story too, with the afterlife painted exclusively in black and white, eschewing even the now cliché Frank Miller black, white and red trap that it could so easily have fallen into. That said, there’s plenty of red to go around in the other scenes, with images of gore and carnage given real weight even in monochrome. The colours used to depict the world of the living meanwhile are muted and dirty, giving everyone and everything rendered within them a kind of grim, grimy tinge well in keeping with the story’s tale of morally bankrupt and senseless vengeance.

If I had to pick up on one fault, it’s the ending. Although the momentum of the story and the struggles of the titular character build to a somewhat satisfying conclusion, the last section is laced with a few unexplained inconsistencies and a sudden dramatic increase on the amount of uncalled for philosophising. That none of that does anything to detract from the weight of the story is a testament to how well the art and words work together, but it’s difficult not to feel a little perplexed by the sudden arrival of never before mentioned characters and out of place monologues.

Flawed and Fascinating Characters
A human story with an epic scope
A Talking Horse!
The plot gets a little muddied towards the end

Overall though, The Grievous Journey of Ichabod Azrael (and the Dead Left in His Wake) is a fantastic tale of gun slinging, revenge and talking horses. Some of the most common clichés of the western genre brought to life in reinvigorating ways and paired with a fantastical road trip through purgatory (and a few other more familiar locales.) If you only read one western featuring a talking horse this year, make it this one.