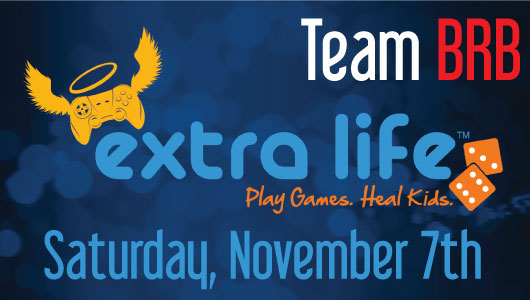 Once again, Team BRB has stocked up on coffee, energy drinks (we know you have a secret stash of Tornadoes somewhere, Coleman!), snacks and, of course, awesome games, in preparation for the amazing event that is Extra Life!

Extra Life is a 24 hour gaming marathon that raises money for sick kids and Children’s Miracle Network Hospitals, and it is taking place this Saturday 7th of November. We would love for you to join us on what will be fun, yet definitely slightly crazy 24 hours, and would be extremely grateful for your support. Every single penny will go to the healthcare of kids who desperately need it! Every little bit helps – whether it is a donation, no matter how big or small, or coming to watch our caffeine hyped gaming streams, or even by joining Team BRB!

We also thought it would be a good idea to let you know what we will be playing on the day and where to watch our streams on the interwebs!

Big Red Raid *of Destiny* will be taking place on www.twitch.tv/bigredbarrel around 13.00 GMT with Dan, Kev, Dave, Coleman, Jaime and English Dave. More Destiny raids to follow and keep an eye out for our second channel www.twitch.tv/BRBTVLive for some gaming goodness as well!

Lauren will be playing Borderlands, Wolf Among Us, The Walking Dead Season 1 and Gears of War

Dave will be playing Destiny, Halo 5, Rocket League, and any other random games that might be on sale or in his pile of shame.

Kev will be playing Diablo III, Destiny, Rocket League, and others to be decided on the day.

Alex will be playing Dragon Age: Inquisition race to Skyhold and Might and Magic Heroes 7

Also, BRB Team Member, Simon is planning on catching up with the marathon on the following Saturday 14th November.