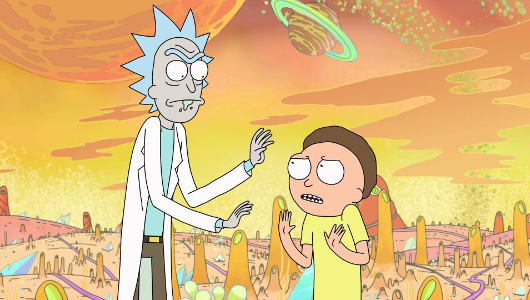 Why Aren’t You Watching Rick and Morty?

If you are watching Rick and Morty please feel free to ignore the above question. If not, seriously what the hell is wrong with you?

Rick and Morty created by Dan Harmon and Justin Roiland is the best thing currently on TV at the moment. It’s the first proper ‘adult’ cartoon I’ve ever watched consistently. And you should be watching it too. Stop reading this article. Go and watch it!

Imagine Doctor Who but the First Doctor was an alcoholic who was a dickhead to his granddaughter. That is the basis of Rick and Morty. Rick Sanchez is a surly, selfish scientist (and very possible the smartest man in the multiverse) who takes his naive grandson Morty Smith on dimension-hopping adventures.

Most episodes subvert a sci-fi trope in some way leading to some brilliant puns in the titles such as ‘Lawnmower Dog’ and ‘Total Rickall.’ All of the episodes have A and B stories, one focusing on Rick and Morty travelling through the universe and the other focusing on Morty’s family. Morty is, more often than not, coerced by Rick into going with him and the family story usually results from Rick’s sci-fi world intruding on their mundane lives.

Rick and Morty works so well because from the outside it seems like Rick and Morty don’t actually like each other but as the series progresses you learn how much they depend on one another. Rick doesn’t dislike Morty he’s just more honest than most people about the degree to which he does like him. In an episode in series two he tells Morty, ‘I remember you as a whiny piece of shit Morty! I’ve got about a thousand memories of your dumb little ass and about six of them are pleasant! The rest is annoying garbage.’ He’s a loving grandfather, honestly.

We are all secretly Rick. Rick is the part of everyone that is tired of the rest of the world’s bullshit. He’s the part of you that when some cuts in a queue wants to grab a baseball bat and tell them to get to the back or it’s going to get ugly. But we can’t because we are not Rick.

When people describe Rick and Morty as an ‘adult’ cartoon, they aren’t just saying adults watch it. This stuff is dark. Rick accidentally destroys the world and casually takes Morty to a universe where they both died so they can replace them and get on with their lives. Rick takes this in his stride but Morty is haunted by the knowledge that his body is buried in the back yard. Rick upgrades the TV so they can watch shows from any universe and they see an advert in which the Lucky Charms leprechaun has his stomach cut open by children who then eat the cereal from his intestines. Like I said: dark.

However what really makes Rick and Morty for me is that it isn’t just a straight sci-fi comedy. The stories aren’t afraid to throw real emotional weight behind them. When Morty’s sister Summer attempts to run away Morty reveals to her that his dead body is buried in the backyard. When she asks him, ‘So you’re not my brother?’ he tells her:

‘I’m better than your brother. I’m a version of your brother you can trust when he says, “Don’t run.” Nobody exists on purpose. Nobody belongs anywhere. Everybody’s gonna die. …Come watch TV?’ 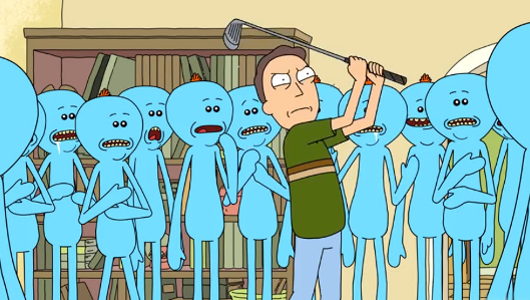 Similarly after a botched house party when Morty decides he’s had enough adventuring with Rick, Rick’s best friend Bird Person (who has a brilliant deadpan voice courtesy of Dan Harmon) tells Morty the truth behind Rick’s catchphrase, ‘Morty, do you know what “wubba lubba dub dub” means? It’s not nonsense at all. In my people’s tongue, it means, “I am in great pain. Please help me.”’

I’m really selling this as a comedy aren’t I? The thing is, it is better than a comedy. It’s a drama that is funny. It is a culmination of every cartoon show in recent years. Futurama is a very obvious reference point but the emotional component is much higher. Fry’s dog was cute and all but Rick and Morty is an ongoing character exploration of the most damaged man in the universe and his grandson who is just trying to makes things better.

Rick and Morty is available on Adult Swim in the US but is annoyingly difficult to get hold of in the UK. Some episodes are available on the website others not.