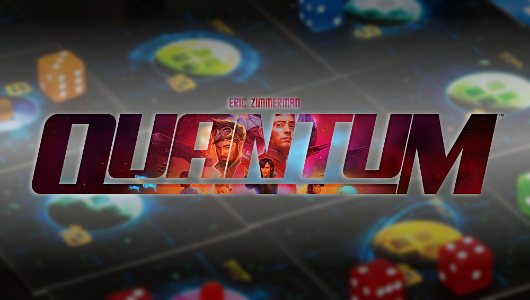 Do you like 4X sci-fi games? Want to conquer the galaxy? In which case let’s take a look at Quantum.

A game of Quantum starts by building a galaxy to fight over. Each tile has a single planet surrounded by 8 space making up a simple grid for you to manoeuvring your fleet around. The game is a race to construct all of your Quantum Cubes onto the planets before the other empires, but that doesn’t really tell you much about the game. 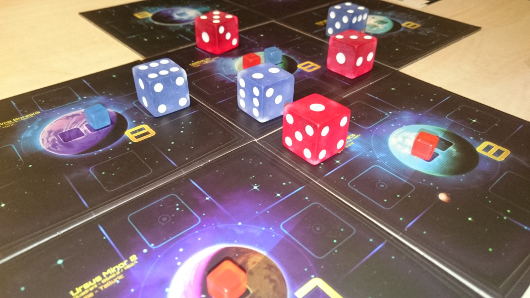 Every turn plays out like a tactical puzzle; how can you use your spaceships to build a Cube on that planet. You are only allowed one of your Cubes per planet and each planet requires a specific value of ships around it to construct a cube. Those “8”s next to the planets in the picture mean you need ships with a sum of 8 positioned around the planet to build a Cube. Your ships are represented by standard d6s, used in a really clever way, each value represents a different type of ship and the value corresponds to the ship’s speed and attack value. Lower is better in Quantum when it comes to fighting – each side rolls another d6 and adds the result to the value of their ship, lower result wins. Each turn you need to manoeuvre and position your ships to construct Quantum Cubes faster than your opponents; outflanking them on one side and attacking where they are weak on the other. 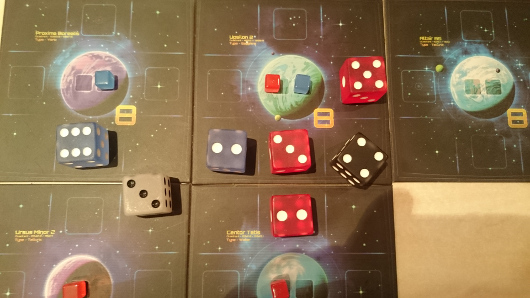 Adding an extra layer to the puzzle each type of ship has a special power that can be used once a turn. Destroyers, that’s a “3”, can warp, swapping positions with another of your ships, frigates can transform into another ship type and so on. This adds an element of combo-ing moves together; move the destroyer here, then swap it for my battlestation (a “1” great in a fight but painfully slow) that can destroy my opponent’s ship leaving the space free for my scout to move in, giving me just the right ships to build a quantum cube on that planet next turn. It creates a rich array of ways to play smart and beat the others to key planets. 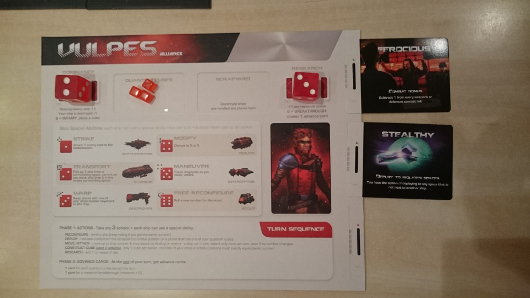 On top of that each time you place one of your Quantum Cubes you can take an advancement card that gives you some sort of special power. It might be as simple as making your ships more powerful in battle or as tricky as letting you deploy your ships deep in enemy territory. This adds just a hint of customisation and fine tuning to your empire, making your ships unique from your opponent’s ships, but it also gives you new tricks to stay ahead of the competition.

A tight, tactical space battle
Plays fast
Really smart design
Can be complex, particularly at first
Theme isn’t quite as strong as I would like

Quantum has taken a 4X model and stripped it back to the bare essentials. You have spaceship battles, “tech” advancement, colony building, in fact everything expect real exploration. But all of these elements are finely honed like a knife edge. It makes for a finely tuned machine that plays smoothly, elegantly, and lighting fast. This isn’t a grandiose epic that you can sink hours of play into, and the austere gameplay disappointing is probably going to be disappointing if you expect a true space 4X game. Equally the layers of options mean you need to play it once or twice to get your head around what’s possible. If that hasn’t put you off you will find a brilliant and smart game that is not only fun to play but also a beautiful piece of game design.