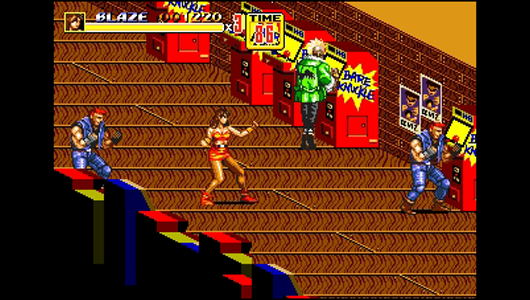 Time to give those Bare Knuckles a work out as Streets of Rage 2 comes back for another round!

Streets of Rage 2 originally came out way back in 1992, since then, hardly any side scrolling beat ’em ups have come close to it. In the first Streets of Rage, you play as one of three ex cops, Axel, Blaze or Adam, then punch and kick your way through hundreds of bad guys. Finally taking down the evil Syndicate leader Mr X, ending the corruption in the City. Now a year later, Adam has been kidnapped by the not so dead Mr X and it is up to Axel and Blaze, along with 2 new characters Max, a huge wrestler, and Skate, Adam’s younger brother, to save their friend.

The story is paper thin, but that is not the important thing here, it is all about the combat! While you only have three buttons to use, the combat can get surprisingly deep. You have a jump button, an attack and a special attack, and depending on your character choice, pressing both jump and attack at the same time does a backwards strike which is useful when you get surrounded. The special attack is also useful to clear out nearby enemies, but costs you a small portion of your health bar. Each character has their own quirks as well, Skate is the only character that can dash seeing as he is on roller blades, the other characters have an extra move when double tapping the forward direction and the attack button.

There is a couple of different game types that you can choose from; there is the Standard game, where you pick a character and battle your way through 8 stages, and then there is the new Rage Relay mode, which has you switch character every time you lose a life. Also included are a few different difficulty selections, you have got the original mode which has you punching bad guys until you deplete their entire health bar, casual mode lets you finish off opponents just by knocking them on the ground. Upon beating casual mode, you will unlock Fists of Death mode, where you only have to touch enemies to KO them, even bosses! There is also a 2 player mode on offer as well but seeing as how it is local co-op only, I was not able to test it out for myself.

Going into the options, you can switch between the International and Japanese version. While not massively different, the splash screen says Bare Knuckle II as that was the game’s original title. There is also a couple of things censored in the International version, such as Mr X chomping on a massive cigar in the Japanese original, as well as Blaze’s jump kick animation, as in the Japanese version you can see a couple of pixels of underpants. Don’t ever change Japan! You can also switch between the Mega Drive and Mega Drive 2 version of the game, but I have failed to notice any difference while playing. 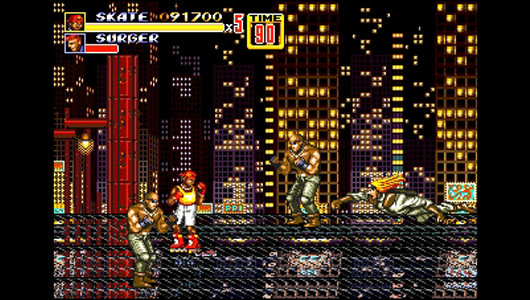 While I hardly ever use the 3D on my 3DS, I always switch it on for a bit just to see how it looks, and to be honest, I forgot that I even had it on after a while. The effect is actually pretty impressive on the New 3DS, the objects in the foreground seem to pop a bit more than usual and it gives the game a bit of depth. There is an option to switch between two different 3D types, but I found the default one looked far superior.

Speaking of visuals, this is my only real issue with the game. Stages consist of a number of different areas, but some of them are completely disjointed. Stage 3 for instance, has you start on a city street, then you go into a bar, to a pirate ship, back to the street and then into some weird alien jungle complete with exploding facehugger pods.

Apart from its strange level design continuity, this is still one of the greatest scrolling beat ’em ups available. While it is not bringing much new to the table, it has still got some satisfying combat with a wide range of moves on a limited button set, and some great chip music. If you have never played Streets of Rage before, this is a great place to jump in and experience it.

2 Posts in Total See Them »