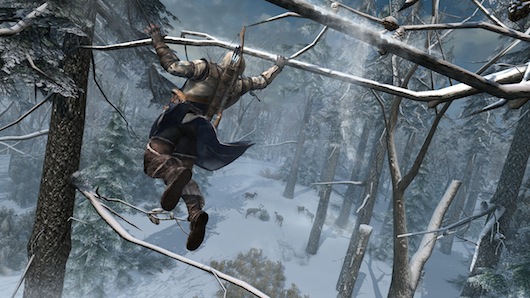 Looking back on the pre-release hype now, it’s easy to see why the world was so excited for Assassin’s Creed III based upon its first trailer. Wolves! Jumping across trees! Hundreds of angry British redcoats charging across the Frontier plans of Revolution-era America to meet their death upon the end of a blade wielded by a feisty Native American Assassin. It was all pretty exciting.

For the most part, Creed number three was pretty well received by critics and players alike. This was largely because the game functioned. It loaded when you pressed the Start button, it created an expansive world on your television and gave you a man with a hood and some knives with which to explore it. 10/10.

No. Assassin’s Creed III is perhaps the series’ messiest and most disjointed title, powering past even the oddly apathetic Revelations to scoop up the (de)merits. Perhaps through little fault of their own, the team at Ubisoft Montreal took the promises made in the expo trailers and reduced them to static set-pieces and overwhelming quantities of features and menus, all while creating a protagonist infinitely less interesting than the villains he was up against. That it functioned is undeniable – whether it was great is debatable. 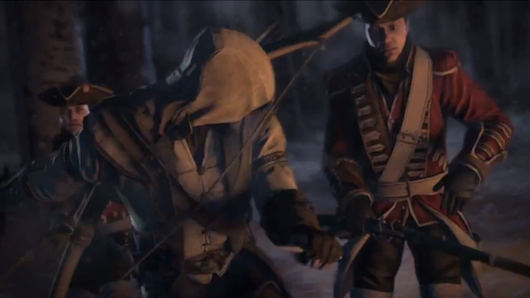 Connor Kenway, distant relation of series mainstay Desmond Miles and American-Indian Assassin bore, lacked the gravitas bestowed upon the suave and infinitely charming Ezio Auditore of three Creeds gone before. What he did have was a super interesting and spunky dad, Haytham, but the two hours or so spent playing as him at the start are only there to reveal that he is part of the Templars – enemies of the Assassins and series bad guys. The next two hours following are spent playing as the surly Connor as he grows up in an Indian commune showing off to his mates and leaving his village to burn during a game of hide-and-seek. Good job Connor.

It’s not completely his fault that Creed III hummed like a stale public toilet. Unlike the open-ended Creeds that came before the game’s opening missions rope players into carrying out the most mundane of tasks without ever letting them do anything fun like climb a clock tower or stab a man in the face. When the reins are finally handed to the player and Connor gets his Assassin Boy Scout uniform – at around the five hour mark – the game ensures that you go nowhere fast by making actually getting places as troublesome as possible. The fast travel system doesn’t work and when Connor befriends a ship captain and gains access to his boat he can only sail a handful of places anyway. Not that he’d ever set sail, because the map didn’t work.

The missions were scripted to a frustrating degree of precision compared to the more freeform approach taken by Creed games gone before. An open-world environment ought to offer up multiple ways of tackling problems and yet missions largely revolved around riding horses, casually hiding or standing completely still and ordering men to shoot guns at other men on your behalf. It’s likely that the number of actual assassinations which take place in the course of the story can be counted on two hands.

Creed III‘s quality largely took a nosedive as a result of the sheer number of new systems that Ubisoft Montreal attempted to introduce into the works. Adding new features is no mean feat from the off – doing so while creating a new storyline inside a new game engine is asking for trouble. Wide-open areas of wilderness had beasts to hunt and items to craft from their skins and bones. Connor’s ship had upgrades to be bought and the homestead business had wood and other such supplies to be shipped in convoys up and down the East Coast.

If any of the menu systems could have been worked out, it’s likely that these things would have been great, but the homestead business got robbed once and then the menu seemed to stop working. Hunting became too much of an effort to carry out when it turned out that Connor must travel back to the city to do anything with his captured prizes. Too many features were crammed in without much thought. 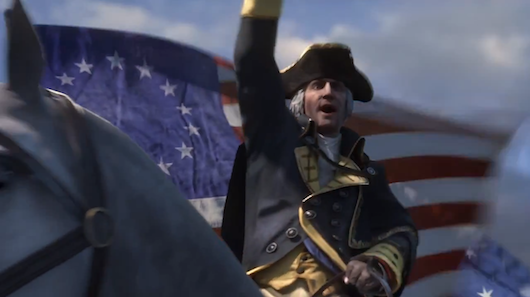 It’s a bit weird that George Washington was so prominent in the original trailer. He appears in the game for about ten minutes.

Even the story, usually Assassin’s Creed‘s big saving grace, wasn’t hugely interesting. Despite including Benjamin Franklin, George Washington, Thomas Jefferson and Samuel Adams in its roster, Creed III succeeded in being immensely boring in part thanks to Connor the Two-by-Four but also largely because nothing seemed to actually happen. People were stabbed and shot and died without anybody ever really saying anything particularly interesting. The main villain even dies in a cutscene with no player involvement. And then America was free. Credits roll. Shoulders shrug.

It’s easy to spot the lessons learned after Assassin’s Creed III within the first two hours of its sequel, Black Flag. There’s no sprawling wilderness or childhood tutorials – no charming villain giving way to a dullard of a protagonist; instead, the world is opened up with collectibles galore to be collected and a pirate ship that can be sailed wherever the heart desires. There’s even an Assassin uniform ten minutes in, rather than a quarter of the way through the entire story.

Perhaps it’s best to look at the game as a stepping stone, a tough lesson in keeping game design under control and understanding, from the very beginning, exactly what your game is to be about. Had Assassin’s Creed III been about exactly what it promised at the start – fighting off wolves, refined exploration and plenty of hearty stabbing of heinous villain types – it may have turned out a little better than the game it became. On the plus side, the sequel that followed it is arguably all the better for the lessons learned before.