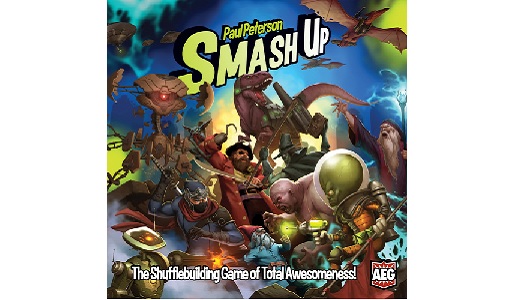 Review: Smash Up (Board Game)

If the idea of Robot Ninjas vs Pirate Zombies makes you LOL, this is the game for you.

Smash Up does not provide a great first impression. From its trying–too-hard-to-be-hip rulebook to its childish approach to wackiness that assumes simply combining the word “pirates” with the word “zombies” must automatically equal hilarity. Its box is large, but only to accommodate enough empty slots for future expansions and the core game is sorely lacking in that most basic of score-keeping tools – Victory Point counters (for which you have to buy the first expansion).

Once you get past that, however, it kind of works.

Smash Up is a “shuffle-building” game that invites players to create decks by mashing pairs of smaller decks together (like the aforementioned pirates and zombies) to create one of many unique combinations.

Players draw a hand of cards from which they may play an Action (a one-use buff) and a Minion (a quirky character), resolving any special abilities as they arise. The goal of each game is to “break” Base cards by placing enough minions next to them that the combined strength of all players’ minions around that base equals or exceeds its own. Once this happens the players with the highest strength receive Victory Point rewards and a new base is drawn.

The game’s own strength is in its theming and just how well the rules on the cards suit the archetype of the faction they belong to. Here the broad brush strokes of the decks really come into their own. The Zombies are cheap and cheerful, with most of their cards played from the discard pile rather than the draw deck. The pirates are swift and mobile, abandoning bases they can’t win to pick on softer targets. The Ninjas love to swoop in reinforcements at the last minute to snatch victories out of the jaws of defeat. It’s all so beautifully obvious.

The spirit of the rules combines effortlessly with the theme and the combo-ing actions and minion powers create tasty mini-narratives within a single turn. Of course there are overpowered deck combinations, and certain factions don’t work nearly so well together but smart players can avoid these flaws with something as simple as random deck allocation. It’s not something to worry about and hey, it makes sense that Alien Robots are a killer combination, probably (we didn’t try that one).

The real worry is something much deeper. It’s cleverly disguised behind all these lovely spiralling turn-actions but eventually you realise that for all its wackiness the game is really just asking you to put down more *numbers* than someone else. And that’s pretty boring,

Maybe such a simplistic goal was deemed necessary considering the broad audience Smash Up is clearly aiming for, but to me it feels like too bland a dessert after all the flavour contained within actually taking your turn. It’s because of this, and the bare bones nature of the core set, that I can’t recommend Smash Up as highly as I perhaps wanted to.

A fun diversion for all ages, but too shallow to be worth investing in.