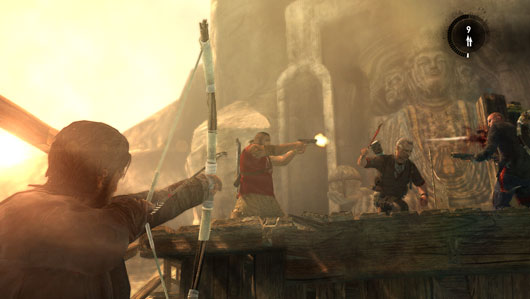 I was lucky enough to get invited to a community day held by Square Enix to show off Tomb Raider’s multiplayer. Mat already had the opportunity to sink some more time into the single player, but I got the chance to get some hands-on time with a build of the multiplayer – a mode that, thanks to it only being announced in the past few weeks, has been criticised by some as an afterthought. I raided Square Enix’s London headquarters to see if I would unearth a forgotten treasure or tomb best left undisturbed.

This Tomb Raider reboot is a reaction. A reaction to Lara being out Lara-ed by a certain stubble-laden, wise-cracking treasure hunter by the name of Nathan. Late on in production, while studying the Uncharted formula for success, developers at Crystal Dynamics noted one missing ingredient that Mr Drake had managed to add to the mixture with a fair degree of success, namely; multiplayer.

Perhaps even more strikingly similar than the cinematic presentation of the single player portion, it is reasonably clear that the designers of the multiplayer part of Tomb Raider took a long hard look at Uncharted’s multiplayer offerings. They carefully studied what made that successful and looked to build on it and, in doing so, gave themselves a great head start. That assumption could be a little unfair, as the similarities in the multiplayer could also have arisen from natural development of two games of a very similar genre, but there is a bit too much to be entirely coincidental and, quite frankly, not to do so would have been foolish. Eidos Montreal, who most recently produced Deus Ex: Human Revolution, took some time away from developing the latest version of Thief to work on the Tomb Raider multiplayer. So far, at least, Eidos Montreal do not appear to be fools if their track record to date is anything to go by.

The design and layout of the levels will likely be a key factor to the multiplayer portion being a success or not. We were only able to play one of the levels (from the five that were available as options on the title screen) The level was named Chasm and featured an asymmetrical layout of wooden structures that both make up and house a number of platforms in addition to providing a number of covered indoor areas on various levels. The level I played allowed for liberal use of the climbing mechanic, not least due to the height giving you an advantage in bullet exchanges, but also as you will want to reach the middle of the arena to gain control of the ‘trigger feature’ available on each map. We were given an indication that these ‘trigger features’ would differ across each map, but on the Chasm level we played it was a large bell that summoned a sandstorm when activated. The sandstorm swirls across the map blinding your enemies, while still highlighting them in red on your screen. 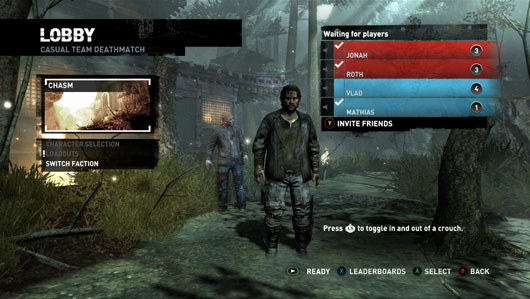 In Tomb Raider’s multiplayer, you can select up to three weapon loadouts for each of the two factions – Scavengers or Survivors – of up to four people per team. You can switch between any of the selected loadouts each time you die and can also choose to respawn at the base or on a teammate. The loadout options allow you to choose between a primary weapon, a secondary weapon, a gadget (such as a grenade) and an offensive and defensive perk. All of these appeared to have a multitude of unlockable options and some will be better suited to differing play styles.

The standard fare of a shotgun and an AK47 seemed to behave like effective killing machines we all know and love (there are problems with that last sentence, but that is an entirely different blog post), but the main source of deathjoy came from the bow. Balanced in a different way than in the single player game, the bow is a very effective one-shot kill when drawn back to full extension – with the downside being that your arrow will automatically fire after a short period of time. It is an even more of an effective death-dealer when used in conjunction with the small red barrels dotted around the map (of course it goes without saying this game would have been immeasurably improved with a Bigger size of Red Barrel!).

Whilst getting used to the bow and camping out in my base, I discovered another nice feature where a warning flashed up on my screen that I would be kicked out of the game if I did not move away from my base in 30 seconds. Always nice to see that someone is guarding against the ever-present scourge of the camper menace and shows that thought has been put into the design by the developers. 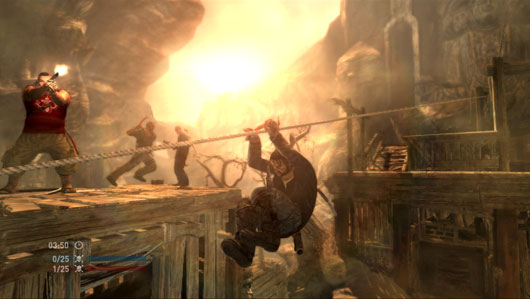 We spent most of our time in the standard Team Deathmatch option, but also tried out the Rescue mode. On the preview build that I played, I did not see any other modes on offer, but these are the two that are currently being “shown so far”. I would imagine that there will be more competitive modes in the final game, but there was no indication if there would be anything similar to the co-operative modes that are on offer in Uncharted 3.

The Rescue mode tasks one team with collecting medical supplies on one side of the map and then walking them (as running or pulling out your weapon will drop the medical supplies) to a designated drop off point. The opposing team has to reach a set number of kills prior to the team completing the required number of successful supply drops. This was set to five successful drops versus twenty five kills in the match set up for us and, at first, seemed unfairly skewed towards those just looking for kills; but as an understanding of the mode developed, the matches became extremely close and whilst not wholly original, it was a nice variant of capture the flag.

The addition of traps throughout the map, whilst not a wholly original inclusion, was also welcome and very much in keeping with the style and genre of Tomb Raider. There was also considerable variety in the traps available, with spikes ready to impale unlucky passers-by and rope snares ready to hoist people into the air. You can shoot your way out of a rope snare by looking up and shooting at your ankles or, as I found, just stay in there whilst using your pistol to get the final kill of the round, win the game and look all cool and upside-downy when you are doing it.

From what I have seen, I’m not convinced that Tomb Raider‘s multiplayer will be held up as a shining example of a new age of multiplayer, but it certainly does not seem like the antiquated, heartless last-minute cash-in that many people seem to have written it off as. I have learnt recently that I tend to prefer third-person multiplayer games to first-person ones (such as the multiplayer modes of Gears of War and Mass Effect 3), but I admit that the enduring popular choice is for FPSs, and so my recommendation may not be for everyone, but it is certainly something that I will be digging up and investing more time again in the future.