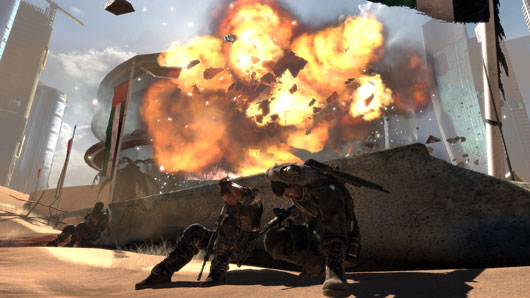 Spec Ops: The Line has a number of technical and mechanical problems but, unlike many other war-based shooters, has a meaningful, thoughtful story that is likely to stay with you.

The story is setup as a mystery based around the disappearance of the 33rd Battalion after they are sent in to help cleanup in the aftermath of a gigantic sandstorm that engulfs the city of Dubai. You play the part of a (Nolan North voice-acted) captain of a three-man Delta squad sent in to find out what when wrong with this rescue mission and to investigate why no one has heard from any of the indigenous population or from the 33rd Battalion in over six months. There is plenty of horror in the gruesome tale of what happened after the desert reclaimed the city, but the story never takes an Uncharted-style sci-fi twist. The story may be based on fictional events, but this is a no nonsense, often brutal, depiction of the grimmer side of war than you often get to see in a game — and all the better for it.

The downfall of Spec Ops occurs, almost solely in the mechanics of the game. Getting in and out of cover is not as “buttery” smooth as mechanically similar titles, such as Gears of War, which is more of a problem given that any amount of time spent out of cover will likely result in an instant, often frustratingly quick death. Control of teammates can be more of a hindrance than the help that it should be, mainly as it is not possible to divorce sniper orders from general instructions, which frequently results in both teammates making suicidal charges across crowded battlefields. As a result of these shortcomings, you might have to play through sections more times than both you and repeat showings of the story would ideally want. 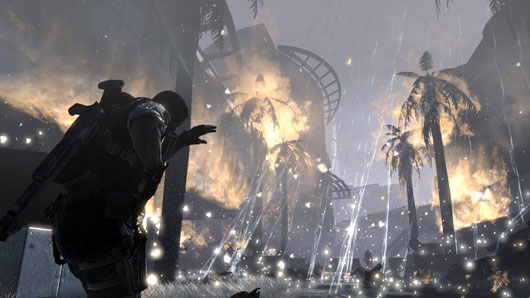 Any other problems I have with the game come from the non-diversity of enemy types — especially in later levels of the game. Some of the foes feel more like enemy “types” than they naturally should. As an example, the knife-wielding psycho (who seems like he has escaped from id’s post-apocalyptic Rage), is unrealistically annoying in both gameplay terms and in the repetitious nature of his character model. Who brings a knife to a gunfight? This guy does. Two or three times a level and usually with more success than his battlefield technique would justify.

The other unrealistic annoyance: the “heavy” character type.  Your teammates will yell “another heavy inbound” whenever he is slowly meandering towards you dressed head to toe in body armour. This is a shame, as the quick deaths that you and your teammates must endure are nicely balanced by the lack of the unnatural bullet sponges that inhabit so many other shooting games. Double-tapping any of the frequently occurring enemies in the head will always be a kill, as will sniping them in the chest. A refreshing change from the normal “keep shooting until you see them drop their weapon” mechanic that often plagues many other similar games.

These shortcomings stand out because Spec Ops: The Line has many really nice touches.

The story stands out.

The dynamic between you and your teammates diminishes as their respect for you erodes throughout the story, which is realistic and refreshingly different from the normal sometimes tense but generally unbreakable bromance that we are used to seeing throughout this genre.You have to make some very difficult decisions; sometimes there is no “right” option. The plot certainly does not shy away from fully exposing the horrors of war, both in graphic detail and in showing the effect it has on the mental state of those involved. Whereas this comes across as merely shock value in Modern Warfare‘s “No Russian” scene, it is somehow more respectful, perhaps as it does a better job of establishing context, while no less shocking, thought-provoking or memorable; however, this makes factors such as rewarding of execution kills seem wholly out of place and ill-fitting in a story that is otherwise respectful and mature in the handling of its subject matter. 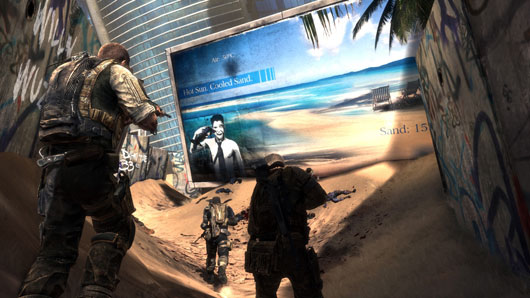 Parallels have been drawn with the Heart of Darkness and Apocalypse Now, and the developers have openly stated that they had them in their sights when planning and executing their vision for the way the plot pans out and the delivery of the story. How accurately they have achieved this vision, I will leave in the hands of those more familiar with the original source materials. I can say that they have done a very good (if slightly short of perfect) job of something that I previously thought impossible: accurately portraying the level of horror and the mental strain that this puts on those involved, without making you so ashamed and disgusted that you feel guilty or uncomfortable to continue playing. It may be so horrific at points that you want to set down the controller and come back to it later — but you will want to come back.

I really like the use of sandstorms throughout the game. They occur a limited amount of times, almost to the point of the developers being overly conscious that they do not outstay their welcome. Aside from being some of the most visually striking moments of the game, the reduced visibility and inability to communicate with your teammates circumnavigates any issues with the squad commands and makes for some enjoyable sections of gameplay — which you are less likely to have to replay than those more mundane moments around it. The use of sand as an advantageous environmental hazard is, conversely, over-used, as it does not feel at all dynamic. Too often it is the only solution to progression instead of a viable option and as such feels stilted and cumbersome.

Sandstorms and the use of sand as a weapon also play their part in the multiplayer. This adds some welcome unique elements to what is otherwise a fairly derivative cover-based third-person multiplayer experience. Once you have had some time to become accustomed to the layout of the maps, there are areas where you have a definite advantage to camp behind cover or patrol certain areas, but once you are aware of these areas, you can also make use of effective counter-tactics.

Spec Ops: The Line achieves a higher mark of recommendation, as I feel that video game fans should experience the story and its presentation, despite the mechanical issues that hold it back from being a standout game. The only caveat: Spec Ops: The Line might be better as a rental than as a purchase. The campaign is less than six and half hours long, and the multiplayer will not be for some.  Whatever you decide, it is worth seeing if YOU will be pushed to cross the line.