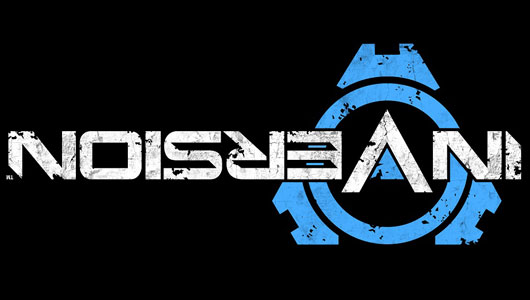 It is hard to talk about Inversion without mentioning Gears of War. Mainly as it is so similar it feels like the Inversion design document stole Epic’s homework, crossed out the words “active reload,” added some gravity mechanics and tried to hand it in as their own work. Many games have done similar since the success of Gears of War (I even mentioned it my recent review of Spec Ops: The Line) but few games have felt so directly derivative. Gravity of War may have been a more apt title.

The only problem with copying someone so closely is that you “roadie-run” the risk of being constantly compared with a franchise that has three iterations to perfect upon its formula. Even the first Gears of War sets a high mark that is difficult to measure up to. Inversion falls short of doing so and, as such, feels dated and second-rate. Inversion only has two-player co-op compared to Gears four-player and even that is only playable online. Inversion also seemed to have copied some of the Unreal Engine’s early technical issues and texture-pops like it has time-shifted back to a Mass Effected 2007.

The third-person, cover-based shooting is almost a “word-for-word” copying of the Gears of War system, as is the weapons and weapon selection systems. Even picking up your downed co-op or AI partner feels like it has been exactly lifted from Gears. With active reloads not being copied, too, (possibly for legal reasons) it just feels as some of the fun challenging part of the gameplay is missing. Chainsaw guns are replaced by guns with huge bayonets, which, again, does nothing but reinforce the feeling that you are playing through a “poor man’s” Gear of War.

Exits from many areas of the game rely upon the buddy mechanic of one helping the other up or holding a door open for each other. Aside from being a generally tired and overused gaming method of moving to a new section, it is not handled particularly well and feels totally out of place when not playing in the online co-op. Many of the places you have to hoist your partner character up look entirely climbable, even without the aid of your gravity manipulation device that is strapped to your back. The metal shutter doors that you can lift up with your bare hands cannot be lifted by the device that lifts much heavier objects. The same doors can somehow resist the onslaught of cars being hurled at them without suffering a dent. 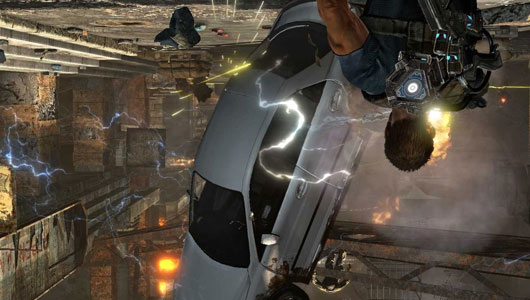 Gravity manipulation is used to solve environmental puzzles. When part of the critical path, your AI partner will almost always tell you exactly what to do before you have a chance to look at the environment, which on most occasions is probably welcome, as the solutions are often so obtuse that you are unlikely to notice them by yourself. While this does prevent you from getting stuck, and it keeps the flow of the game, it does rob you of the puzzling elements of your puzzle. It would have been nice to have included a hint system similar to that seen in Uncharted. The only time you will end up with a sense of satisfaction from the puzzles is figuring out how to get to some of the cleverly hidden packs that upgrade your Gravlink.

You get a fully functioning Gravlink near the start of the game that helps to introduce the device into the story as its primary function being as a mining tool. This gets taken away from you, and then you spend the rest of the game upgrading it back to the level you have to start with. I understand the need to feel like you are making some progress, the need to tease what is coming and to possibly introduce the wider implications of the mechanics of the game, but I cannot help feeling that, overall, this does more harm than good. Progression through the upgrades is too slow, and I fear that many people may not even be patient enough to get to the middle-to-last third of the game where you start to actually have some fun with the gravity manipulation. Add this to the game generally feeling bloated, particularly with the repetitious overuse of many of the boss characters, and it feels that the whole game would benefit from some of the earlier or middle levels been entirely trimmed out of existence. 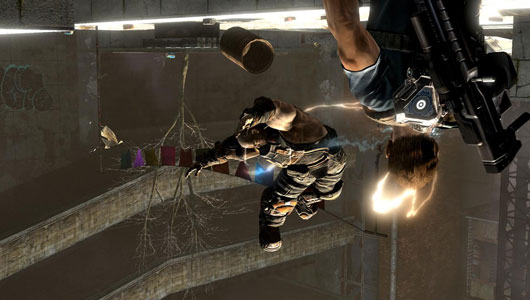 The enemies you face throughout the game are all too bland and characterless. The “Lutadores,” as they are known, are more muscular than your average human, but despite their name making them sound like Mexican wrestlers, their voice acting, deliberately disguised or distorted for a reason I have not been able to fathom, sounds like the chef from the Muppets after a lifetime of steroid abuse and 80 cigarettes a day. Although their human-like appearance has a story-based explanation, it is not enough of a payoff to offset what ultimately comes off as feeling like character design lethargy. Aside from just being overly used, the boss characters are annoying, as they almost always have a one-hit kill option that needs to be avoided. And, even more, annoying, the game can trap you in an area without the ability to swap to the correct gun to adequately deal with the situation. Something that could (and should) have easily been avoided with accurate substantial play-testing.

I was unable to adequately test the online portions of this title, as, despite numerous attempts, I was unable to find more than one person online playing it on PS3 at any one time. I suspect that this may be slightly better on Xbox Live, but that in itself probably tells you enough about the multiplayer. From the little I have seen, from one-on-0ne matches online and from preview events, I can tell you that the gravity mechanics are fun when you are using them on someone, but not so much when someone uses them on you. The level design is not well suited to one-on-one matches and soon becomes a race to the sniper rifle or rocket launcher for one person to gain dominance. Again, this leaves me wondering why some games bother with multiplayer when they should have clearly focused more time on the single-player portion of the game.

The gravity mechanics may have seemed like a good idea on paper, but perhaps they should have taken a closer look at the grades that Fracture and Timeshift earned. Squeezing a gimmick into your Gears of War clone (or first-person shooter) may not be enough to get high reviews scores and having to constantly fall back on an ultimately limited mechanic may drag your game down. Given that the gravity free sections of Inversion are most reminiscent of Dark Void — another game that did not score well with critics or gamers — it is almost as if Saber Interactive set out to make an average game. In that they have at least succeeded at something. It is mostly frustrating, as it seems as though there is a potential good game (if not a great one) just below the surface; however, there are just too many layers of crap to pick up and throw out of the way before these bits can be enjoyed. Too much to make a positive recommendation.